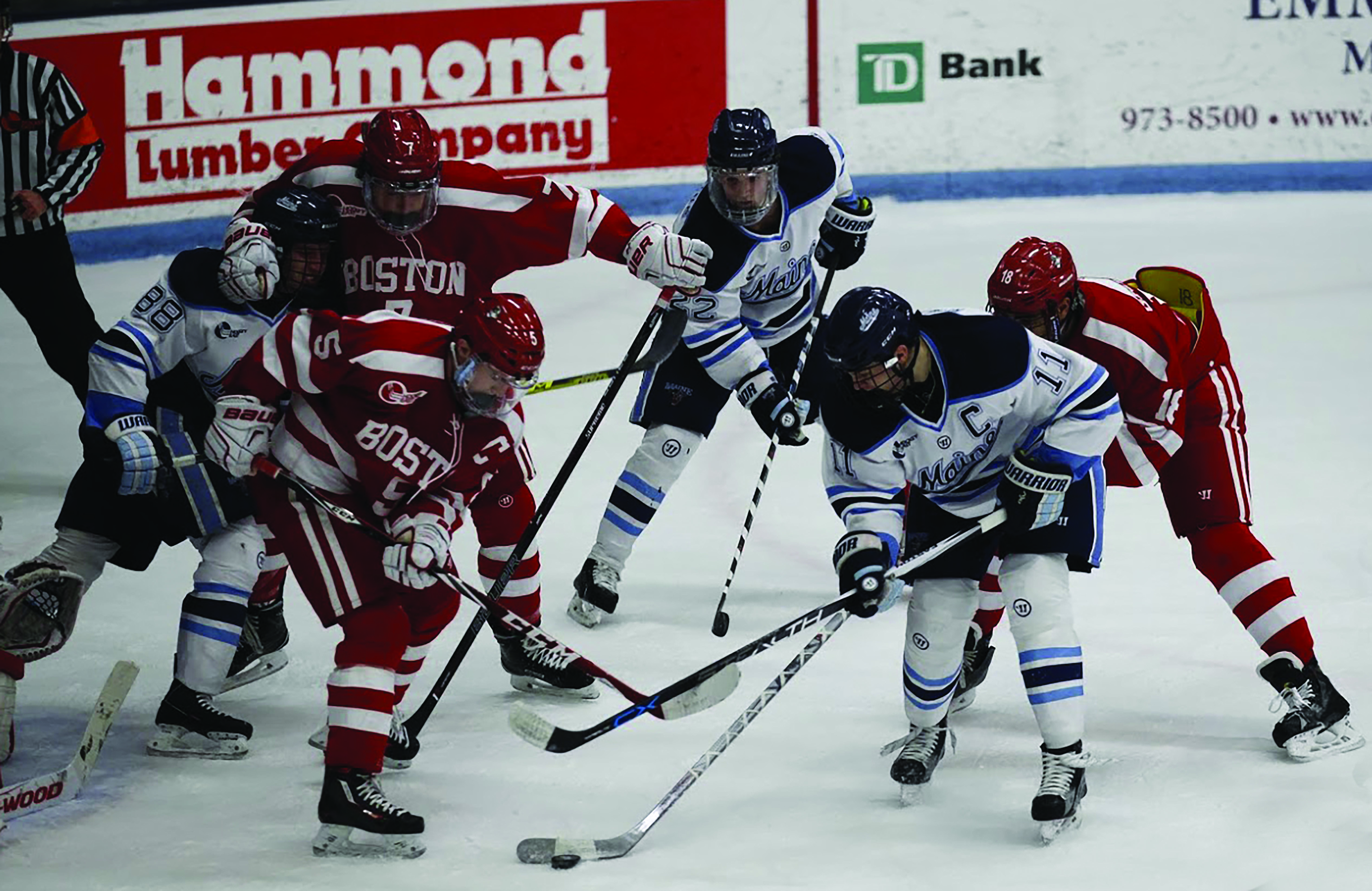 The Maine Black Bears hockey team expected to upset the No. 1 Quinnipiac Bobcats at the Alfond Arena Tuesday night, nursing a 3-1 lead with under 10 minutes remaining in the contest.

The young Black Bears would learn, however, just how quickly circumstances can change when confined to one sheet of ice with the top ranked team in the country, even if it is home ice.

With the Alfond faithful back in town on the first day of the spring semester, the Black Bears looked reinvigorated and ready to notch an upset that could give their team enough confidence to make something of this season. Their hard work was stymied by a pair of hooking penalties late in the contest, giving a powerful Quinnipiac offense, accompanied by two forwards tied for 10th in the country in points, the opportunity it needed to net two late goals and escape the Alfond in a 3-3 draw.

“We have to be precise,” Black Bears Head Coach Red Gendron said after the game. “Tonight, we weren’t precise when it came to taking penalties. Those stick penalties bit us.”

In the final six minutes of action, Quinnipiac tallied two goals to escape an embarrassing ride back to Hamden, Conn. The Bobcats initiated their late response when third-year forward Sam Anas snuck a puck under the arm of Maine first-year goaltender Rob McGovern that dribbled to the back of the net, narrowing the Maine advantage to one goal. First-year forward Thomas Aldworth found the back of the net on a power play goal with just 47 seconds remaining in the contest, negating a victory for the Black Bears squad that is just 2-5-3 in their last 10 games, and in desperate need of a win.

Quinnipiac came out firing in the opening period, netting the first goal of the contest on McGovern just six minutes into action. Second-year forward Tanner MacMaster stole the puck from a Maine defender behind the Maine net and fired an odd-angled shot from the goal line. McGovern couldn’t see MacMaster had gained possession behind his net, but darted to the opposite post to prevent a wraparound opportunity. MacMaster went far side with the puck to beat McGovern, who had as much chance at stopping the puck as the puck had of going in, giving the Bobcats an early 1-0 advantage.

The Black Bears showed their resiliency by responding with three unanswered goals to take a 3-1 advantage with 19:26 remaining in the middle period. Two of those tallies came just 1:18 from another midway through the opening segment.

Fourth-year captain Steven Swavely got the Black Bears started when he scored on a putback opportunity from point blank range in the low slot. Maine won an offensive zone faceoff and first-year forward Dane Gibson, who finished with two assists, instantly fired a shot off the mask of fourth-year goaltender and Hobey Baker Award candidate Michael Garteig. First-year forward Brendan Robbins attempted to corral the puck but was bodied out of position by a Bobcats defender. Swavely found the puck and sent a shot low to the stick side, using Robbins and company as a screen in front of the net to sneak the puck past Garteig and knot the score at 1-1.

Second-year forward Nolan Vesey scored the Black Bears second goal on a triangle setup behind the Bobcats net. Third-year forwards Cam Brown and Blaine Byron cycled the puck with crisp passes from the corner to behind the crease, setting up Vesey for an easy chip-in once he gained position in the low slot. Byron sent a bullet pass to Vesey on the tape, who fired to the top corner of the net before Garteig could react, giving Maine a one goal lead.

Robbins would add to his night for Maine with a wrist shot score from the right circle on an even strength rush toward the Quinnipiac net, enhancing the Maine lead to 3-1 early in the second.

McGovern’s production mirrored his counterpart Garteig all night, making 30 saves on 33 attempts. Garteig finished with 29 saves in net for the Bobcats on 32 shots by Maine.

Maine needs a victory against Hockey East conference rival Boston University on Friday, Jan. 22, when they face off against the Terriers at the Alfond Arena. The Black Bears find themselves in desperate need of a conference victory, as they currently sit in last place in the league standings. Puck drop is scheduled for 7:30 p.m.

Maine fell victim to sudden change in the first half of a home-at-home series with the No. 11 Boston University (BU) Terriers on Friday night. Terriers fourth-year goaltender Sean Maguire made a point blank save on a 2-on-1 opportunity for Maine, squashing the Black Bears hopes of knotting the contest at 2-2.

“We had no answer for that [Lane] line,” Black Bears Head Coach Red Gendron said after the contest. “That was the difference in this game. They grinded us.”

The physical contest came down to a few miscues by the Black Bears defense, as the Terriers used speed to their advantage and capitalized on the mishaps of the young Maine team.

Each time Maine got itself within striking position, BU took the wind out of their sails by notching an easy goal. The Black Bears kept competitive throughout back and forth action, but found themselves out of position on a pair of BU cycles in the defensive end, giving the Terriers scoring line room to maneuver the puck around Black Bears fourth-year netminder Matt Morris.

Despite the defensive errors, Maine scored on two of three power play opportunities, marking only the second time of the season that the Black Bears tallied two power play goals in the same contest.

The first Black Bears power play goal was tallied by third-year center Cam Brown, who received a centering pass in front of the net by fourth-year captain Steven Swavely. Brown deked to his strong hand and then reversed, scooting a backhanded shot behind Maguire and into the back of the net to cut the Terriers lead to 2-1.

A terrific outlet pass gave Maine a 2-on-1 opportunity to tie the score at 2 after the power play goal, but third-year forward Blaine Byron hesitated too long before firing a shot, giving Maguire time to recover to the opposite post, making a timely glove save.

“This is not an easy place to play. Maine is well-coached and it’s no fun to play them,” Terriers Head Coach David Quinn said. “I loved the way our guys stuck with it. This was one of our better performances.”

Byron cashed in Maine’s second power play goal of the contest in the third period when third-year forward Will Merchant connected with him for a goal that brought the Black Bears within two goals with under three minutes remaining.

BU responded only 24 seconds later, when the line of Oksanen and Greenway combined for another goal to put the game away 5-2.

Maine didn’t fare any better on the backend of the home-at-home series, traveling to BU only to be shellacked 6-1 on Saturday night. First-year forwards Bobo Carpenter and Matt Lane each tallied two goals in the contest, as the Terriers offense again had its way with the Black Bears.

BU would get started by scoring four consecutive goals throughout the first two periods before Maine had a response. Carpenter scored both of his, one on the power play, before Cam Brown could respond for the Black Bears.

First-year goaltender Rob McGovern got the start for Maine and struggled mightily, being replaced by Matt Morris in net after giving up the fourth Terriers goal. McGovern stopped 18 of 22 pucks, and Morris stopped 13 of 15 shots in his relief effort. Both were bested by Sean Maguire, who moves to 7-4-1 in net for BU on the season after stopping 22 of 23 shots.

Cam Brown tallied the lone Black Bears goal in the second period. Fourth-year defender Bill Norman dished the puck to Blaine Byron, who found Brown for his fifth goal of the season.

Maine’s luck reversed on the power play after game one. The Black Bears converted zero power plays on six opportunities, while the Terriers made good on one of their five chances with the man advantage. BU also controlled time of possession and shots on net, outshooting Maine 37 to 23 in the contest.

Maine’s inability to produce against conference opponents this season has them in last place in the Hockey East standings, as BU remains tied for fourth. After the losses, Maine moves to 5-15-6 on the season and 2-8-2 in conference play while BU improves to 13-7-4 overall 7-4-3 in Hockey East action.