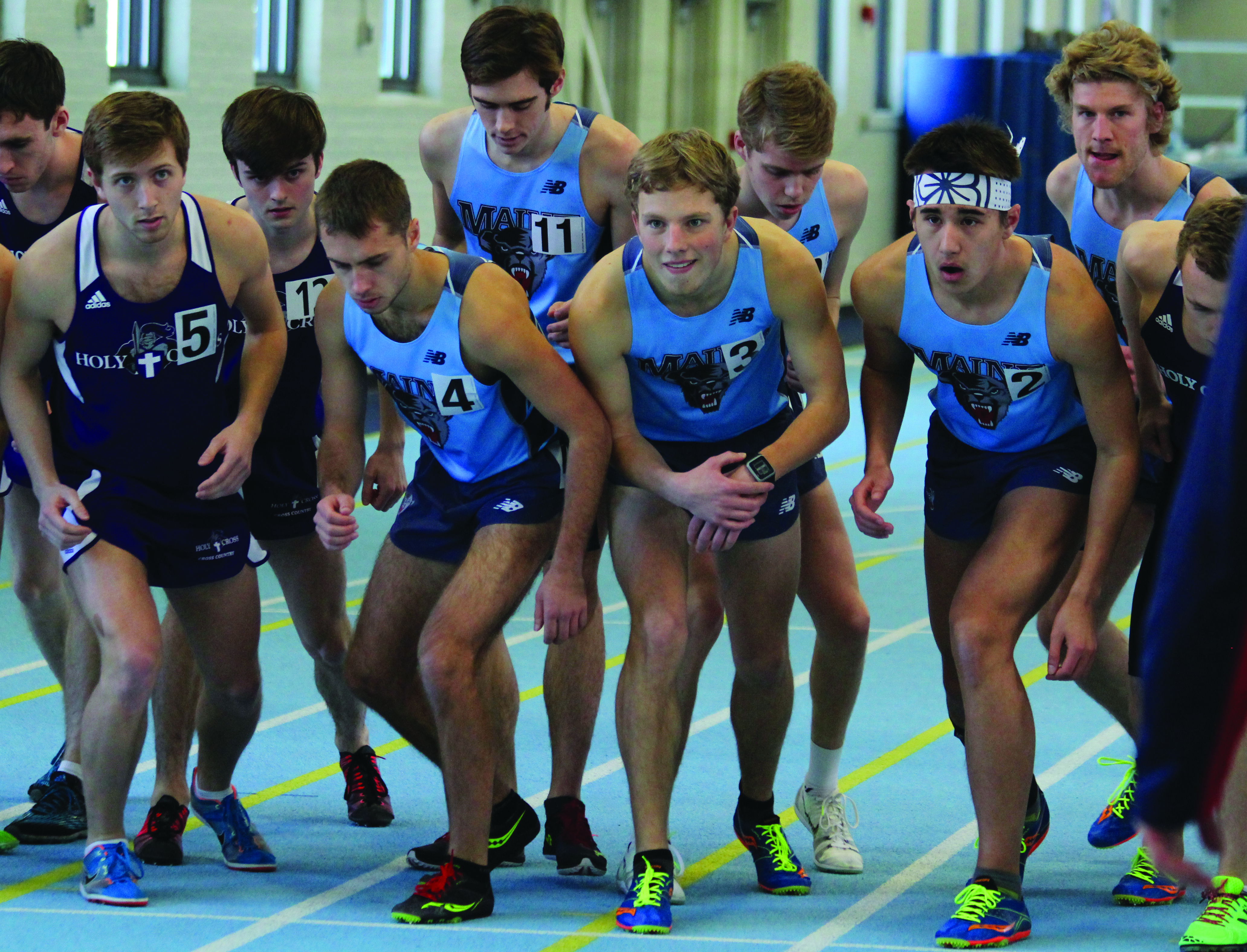 The University of Maine men’s track and field team triumphed over Holy Cross in a home meet on Saturday, Feb. 6. It was a fantastic performance from the men, who managed to break three facility records in the process of defeating Holy Cross 96-73.

The Black Bears set the tone of the meet immediately, with second-year Thomas Murray and fourth-year Travis Hutchins placing first and second in the men’s weight throw. Murray took first place with a throw of 15 meters exactly, which was followed by Hutchins’ launch of 13.55 meters.

The first facility record broken by the Black Bears was third-year Assad Hick’s high jump of 2.08 meters. This tremendous effort was both a personal best and the highest jump ever to be recorded at the Maine facilities. His record was immediately followed by two fellow Maine athletes, fourth-year Tyler Martin who jumped 1.94 meters, and first-year Owen Falvey, who reached 1.84 meters.

The shot put saw second-year Adam Lufkin take first place at 14.08 meters. Murray gave the Black Bears a score in the top two of the category by throwing 13.48 meters.

Third-year Levi Frye broke his personal record in the mile, finishing first at 4:17.76. The second Maine finisher was second-year Elijah Fossas, who placed third overall by finishing the event in 4:38.03.

The 800-meter saw Maine reach another first place position as fourth-year Darryl Wilkinson crossed the finish line at 2:00.60. Third place runner was Maine’s first-year Simon Powhida, who finished only a second later at 2:01.93.

The last record was broken by third-year Jesse Orach, who completed the 3,000-meter run in 8:29.23, over a second faster than the previous record, one which has stood for over three years. This was a particularly inspiring event for Orach since he had been unable to compete at last week’s meet because of sickness.

“I felt really good. I’m glad I could get my confidence back up,” Orach said after the race. “A lot of people had PR’s today. Overall we did really well, we won pretty much every event I saw.”

After Orach, Maine took the top six places in the 3,000-meter run, putting every Black Bear who ran the race ahead of Holy Cross’s first finisher.

Maine finished the meet the way it began it, with the 400-meter relay team finishing first. The team consisted of Martin, third-year Ryan Jamison, Leithiser and second-year Garrett Johnson. Their time of 3:25.18 beat out Holy Cross by over a second.

The University of Maine women’s track and field team traveled to Hanover, N.H. this past weekend to compete in the Dartmouth Indoor Classic. The women put in strong performances across the board, including first place finishes in the long jump, the 200-meter relay and the weight throw.

The women finished the 400-meter race with two runners in the top three. Third-year Teal Jackson finished in second place by .15 seconds, racing across the finish line at 58.68 seconds. Immediately after Jackson came second-year Grace Macura, who finished the event just under a minute at 59.97.

In the 500-meter race, second-year Kaitlin Saulter came in second place by finishing the event in 1:17.60. Second-year Synclaire Tasker came in seventh at 1:22.34.

The 800-meter race was another event in which the women showed their depth, with three racers finishing in the top five. Third-year Kelsey Maxim finished second at 2:18.98. In fourth place, third-year Ahlin Sungsuwan finished at 2:20.94 and fifth place was seized by fourth-year Shannon O’Neil at 2:22.28.

Maine’s first first-place finisher of the day was first-year Ariel Clachar, whose performance in the long jump landed her at 5.48 meters. Also competing in the long jump was third-year Grace MacLean, who took third place at 5.3 meters.

Second-year Rachel Bergeron took gold for the weight throw by throwing 15.15 meters, the only athlete to reach a distance over 15 meters. Third-year Ashley Donohoe came in third place as she threw 14.71 meters.

For the pole vault, fourth-year Jaclyn Masters came in second with a vault of 3.8 meters, followed by first-year Taylor Lenentine who finished sixth at 3.2 meters and first-year Olivia Wallace who finished tenth at 2.9 meters.

The women’s ‘A’ team won the 200-meter relay by an impressive five seconds. The team consisted of Jackson, Macura, first-year Lauren Magnuson and second-year Alexis Dietrich. Their final time was 1:45.52.

Next week the women have two meets. On Friday, they will travel to the Valentine’s Invitational Meet in Boston. Those who stay at Maine will host UNH in a home meet on Saturday, Feb. 13.