Men’s hockey fails to finish, swept by No. 6 Providence

Home /Sports/Men’s hockey fails to finish, swept by No. 6 Providence 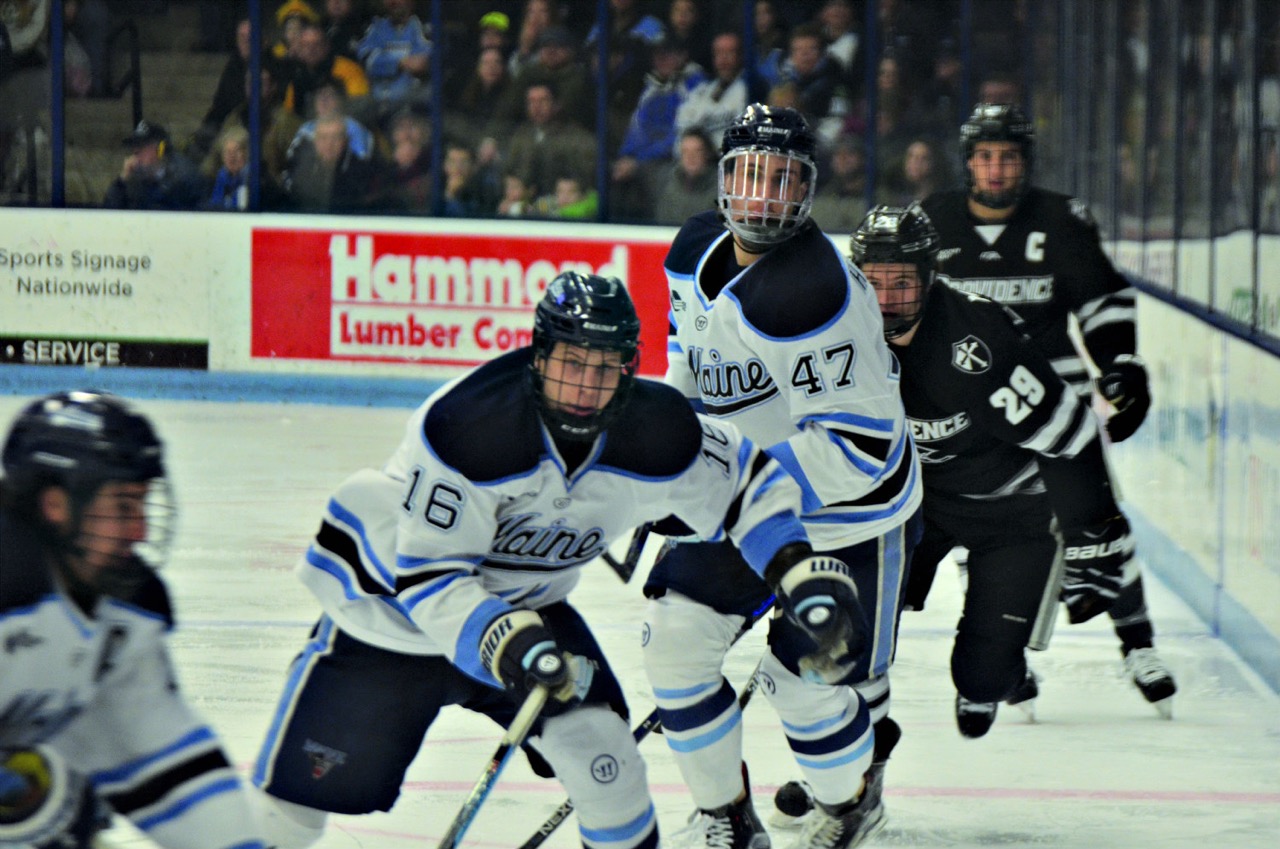 The University of Maine Black Bears were swept by Hockey East conference rival Providence College over the weekend by scores of 1-0 and 4-2. On Friday night, Maine held on throughout three periods despite being outshot 51-19, eventually falling in overtime. On Saturday, Maine couldn’t put together a complete 60-minute effort, as the Friars separated themselves with goals in the second and third periods to escape Orono with two victories.

Morris’ 50-save performance not enough for Black Bears

After three hard fought periods of hockey on Friday night, the Maine Black Bears and the defending National Champions, the Providence Friars, needed extra minutes to decide a winner. Luckily for the No. 6 Friars, it only took 2:13 into the overtime period to escape the ruckus Alfond Arena victorious with a 1-0 win.

Fourth-year wing Nick Saracino corralled the puck on a broken play in the Black Bears end and lifted a wrist shot over the shoulder of third-year goaltender Matt Morris, narrowly escaping a tie on the front end of the weekend series.

“I was in a little bit of a slump the last few games, and it was good to get that goal,” Saracino said after the contest.

Saracino had an earlier opportunity to win the game in the overtime period, but was stopped when a pair of Black Bear defenders checked him to the ice at Maine’s goal mouth, sending him sliding into Morris and pushing the net of its moorings. Saracino wasn’t rattled by the hit, however, and responded for his team during his next shift on the ice.

“We won a battle along the boards at our blue line, [Brian] Pinho called for it, I gave it to him and he had a lot of speed. He dished it and drove the net and created a lane for me, and then I was able to get a good shot on net,” Saracino said.

Maine held on as long as they could, eventually falling victim to the prowess of the Friars offense. Providence tallied 51 shots in the contest to the Black Bears’ 19. Maine was held to single digit shooting in each period, including a middle period where the Black Bears were outshot by a 20-5 margin.

Despite the loss, Morris played an incredible game in net for the Black Bears, finishing with a career-high 50 saves throughout 62:13 of action.

“We threw a lot of heat on him and he handled it pretty well,” Saracino added.

The end of regulation included a flurry of opportunities for both teams, but neither was able to capitalize on their chances. A Black Bears defender mishandled a puck with seconds left in the contest, allowing Saracino to get a look on Morris as he deked the puck to his backhand. Morris retaliated with a ferocious poke check that led to a Black Bears rush at the opposite end of the ice.

“Matt [Morris] was excellent,” Black Bears Head Coach Red Gendron said. “I thought he was really seeing the puck. There were a few pucks where there were temporary screens and he was just locked on it.”

Third-year center Cam Brown retrieved the loose puck after the Morris poke check and sent a speeding outlet pass to first-year wing Brendan Robbins, who had nothing but open ice between himself and Friars third-year netminder Nick Ellis. But, Robbins was called offside as he advanced over the Friars blue line, ending Maine’s hopes of winning the game in regulation.

“We battled real hard. We worked our tails off. We played a pretty good team, taking them to overtime. That’s a positive,” Gendron said.

“We have to finish every shift, every play. We have to do a better job offensively. The way they play, it’s hard to create offense. They play right up in your face so we need to get the puck by them and outwork them.”

Maine was outshot 11-4 in the opening period and was unable to finish off a slew of grade-A scoring opportunities. Third-year forward Brian Morgan missed a wraparound chance on Ellis, first-year left winger Dane Gibson sent an open wrist shot from the slot sailing over the Friars’ net, and Brown connected with the post on a shot from the left circle.

The Black Bears defense weathered the storm well enough to stay competitive throughout the contest, but couldn’t separate themselves at the opposite end of the ice. Maine was plagued by deflections, blocked shots and errant passes as they tried to set up their offense.

Maine looked reenergized out of the gates for the final period, but couldn’t convert offensive possessions into points. Brown had a breakaway opportunity late in regulation, but Ellis stood tall in net for Providence, thwarting Brown’s opportunity after a series of dangles on his way to the goal mouth.

Both teams finished 0-2 on the power play in the contest. Maine’s first opportunity on the man advantage came just 16 seconds into the contest. From there, the Friars would stabilize and go on to control the pace of play and eventually net the game winning goal.

The Black Bears look to come out of the weekend with points as both teams square off on the backend of the weekend series Saturday night. Puck drop is scheduled for 7 p.m.

The Black Bears shared a similar fate on the backend of the weekend series, falling to the Friars 4-2 on Saturday night in a jam-packed Alfond Arena with over 4,090 attendees.

The Black Bears and Friars traded goals in the opening period before Providence scored lone tallies in the second and third periods, outlasting Maine in an extremely physical Hockey East conference matchup.

“We played our tails off the whole game. Truth is, our energy waned a little bit in the second period. We responded well in the third but at no point in the game did we stop competing,” Gendron said.

“We don’t ever accept results other than a victory, but it’s pretty difficult for me to fault the effort, the physicality. This weekend was a big time street fight,” he added.

The opening period featured four times as many scoring plays as game one.

Maine hurt itself early when second-year defender Conor Riley was called on a tripping penalty just 1:59 into the contest. Providence would cash in their opportunity on the man advantage when first-year forward Erik Foley sent a wrist shot from the left faceoff circle over the glove-side shoulder of Morris, who earned the start for game two.

The Black Bears didn’t wait long to respond, scoring on a broken play just moments later. Second-year forward Cedric Lacroix saved a puck from crossing the blue line in the offensive zone by backhanding a slow, bouncing puck at the Friars goal mouth. Third-year wing Andrew Tegeler was positioned well in the paint and batted the puck over the pads of Ellis, who also started in net again for Providence. The goal knotted the score at 1-1.

“In the first period, we got a lot of shots on them, we were in their zone for a lot of the time, and we were dictating and we were fairly physical, which is one of the best parts of our game,” Black Bears third-year defender Eric Schurhamer said.

Providence fourth-year captain Kevin Rooney gave the Friars a 2-1 lead when he and third-year forward Conor MacPhee connected on a 2-on-1 opportunity that beat Morris to the far post. MacPhee sent a timely pass to Rooney while evading Black Bears first-year defender Rob Michel. Rooney collected the puck and chipped it upstairs for an easy Friars goal. The play was reviewed for a kicked puck, but the call on the ice would stand.

The back and forth action continued when Robbins tallied his third goal of the season, making up for his blown breakaway opportunity earlier in the period. Black Bears third-year defender Dan Renouf controlled the puck in the offensive zone, hesitated and then fired a shot at the Friars net. Robbins crossed the goal mouth and found the puck, bringing it to his backhand and lifting it over the outstretched arms of Ellis to knot the score at 2-2.

Play settled in the middle period, with only the Friars notching a goal. A Black Bears defensive miscue in their own end allowed Pinho and Saracino to combine for a tally. After a Maine defender mishandled the puck at the corner boards, Saracino skated out to the right faceoff circle and skipped a pass to the opposite dot. Pinho stopped the puck on his tape and lifted a shot without hesitation that found the top left corner of the net, beating Morris before he could flash to the opposite post in time to make the save.

Providence added to its lead after a helpful bounce allowed fourth-year right winger Trevor Mingoia to notch his ninth goal of the season, giving Providence the 4-2 victory.

“Outside of the outcomes, it was a great series,” Gendron said.

“I thought we played hard. We didn’t play the full 60 [minutes], I thought we played in spurts,” Schurhamer said. “Our process was there and sometimes we just couldn’t get the puck in the net. We battled really hard, just didn’t fully put together 60 minutes.”

After being swept by Providence this weekend, Maine returns to action for another two-game series against Hockey East rival Notre Dame on Friday. Puck drop is scheduled for 6:35 p.m.