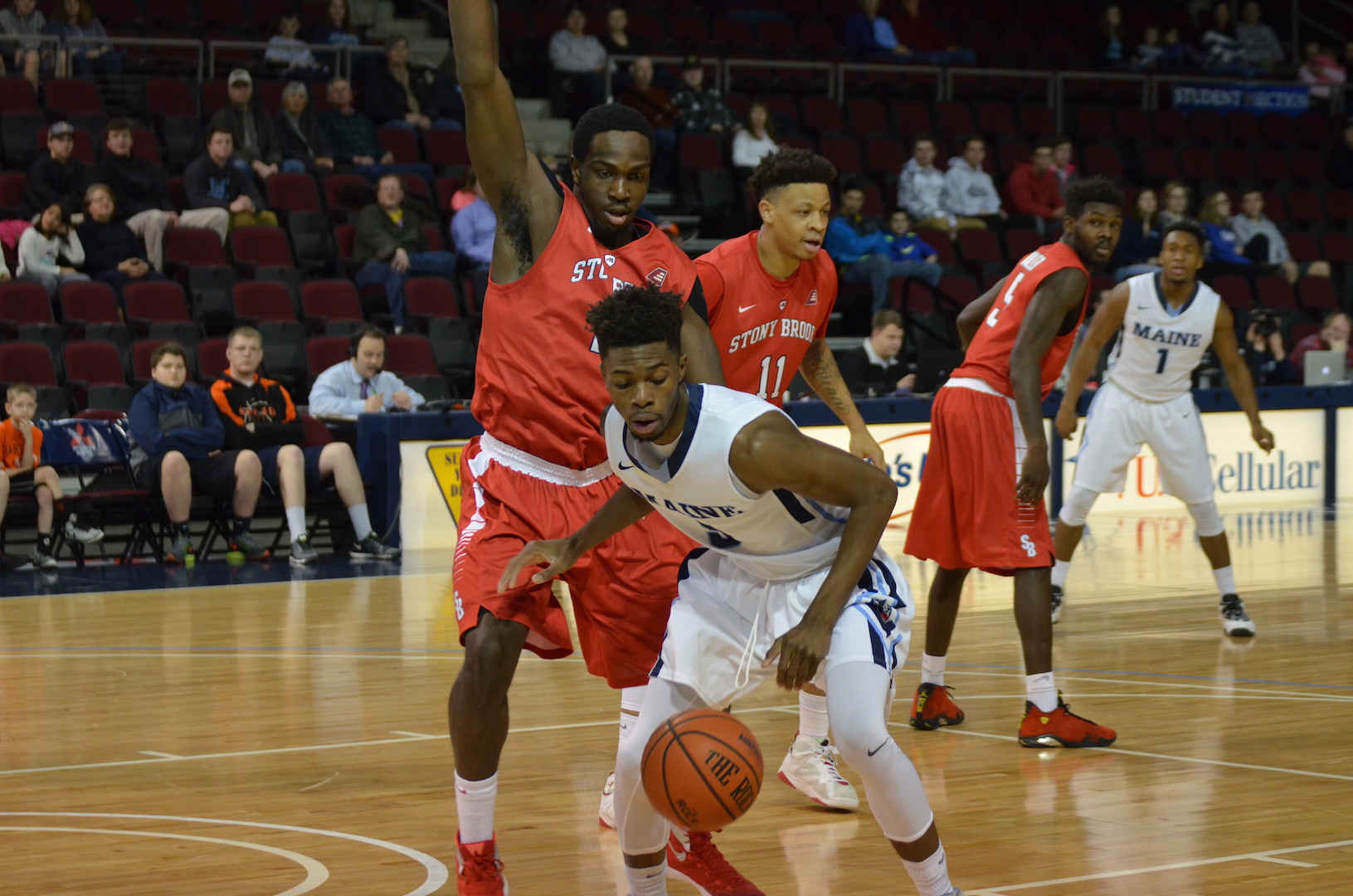 Maintaining a nine-point lead at halftime, the Stony Brook Seawolves men’s basketball team opened up on the University of Maine Black Bears in the second half of action, taking the contest by the score of 75-56. The Seawolves were led by fourth-year forward Jameel Warney, who collected 20 points on 9-for-12 from the floor, making 75 percent of his shots in the game.

Stony Brook was also aided by a pair of double-digit scorers, fourth-year players Rayshaun McGrew and Carson Puriefoy, who combined for 28 points and nine rebounds in the contest.

“Hopefully it’s a good lesson and a good look at what a championship level program is all about,” Black Bears Head Coach Bob Walsh said after the game. “Stony Brook is playing at a high level, they have been for years. The way they’re coached, their talent level, their depth, their toughness, the way they defend, their composure. Everything about them is at a championship level. Hopefully our guys are learning what it takes to get there.”

For Maine, second-year guard Aaron Calixte notched his seventh double-digit scoring effort in the past eight games, finishing with 11 points and four assists. First-year forward Ilija Stojiljkovic added 10 points, seven rebounds and five assists. Fourth-year forward Till Gloger contributed with 11 points of his own off the bench in just 18 minutes, shooting 5-for-7 on the night.

The Black Bears had trouble making shots, shooting just 33 percent collectively from the field on 21-for-63 attempts. Stony Brook excelled from all over the floor, hitting nearly 50 percent of their shots on 26-for-53 shooting.

Stony Brook built an early lead in the contest, jumping out to an eight point advantage in the opening five minutes of play. The Seawolves controlled the pace of play and forced the Black Bears to play catch-up for most of the game. Maine responded with a 5-0 run later in the period with the help of a Calixte three-pointer, one of this three in the game.

Maine trailed by seven points before going on another 5-0 run, and a basket by fourth-year guard Shaun Lawton knotted the score. The Seawolves regained momentum by stringing together a 13-3 run to close out the period, holding on to a 10-point lead with 1:44 remaining in the contest.

Black Bears first-year forward Devine Eke rocked the rim in transition to trim the Seawolves lead, but Stony Brook responded with a pair of baskets before the end of the period, heading into the break with a nine point advantage.

Stony Brook accelerated into the second half of action with an 8-1 run, extending their lead to 14 points. From there, the Seawolves would have no trouble closing out Maine.

“We were able to keep them off the glass in the second half and that helped us a great deal because they were really hurting us with offensive rebounds in the first half. Limiting them to one and done was key,” Stony Brook Head Coach Steve Pikiell said.

The closest Maine would come by the end of the contest was within eight points, and once the Black Bears cut their deficit to single digits, the Seawolves closed them out with a 12-2 run over the next seven minutes of play. Maine was unable to rebound from the lengthy Stony Brook run, falling by a final score of 75-56.

“Maine does a really good job, I’m very impressed,” Pikiell said after the game. “Bob [Walsh] has got these guys playing hard, they’re young, they’re talented. I’m very impressed with how he’s building the program. It was a good win for us on the road, and we were fortunate to come out on top and to wrap up the league today, which was a great thing for our program,” Pikiell added.

Stony Brook generated 19 points off turnovers in the contest and dominated Maine in the paint, scoring 36 points under the basket compared to the Black Bears 20. The Maine bench narrowly outplayed Stony Brook, but couldn’t provide enough help to change the end result.

Maine will return to action on Wednesday, Feb. 24 for a bout against America East rival Hartford for Senior Night. Tip-off is scheduled for 7 p.m.