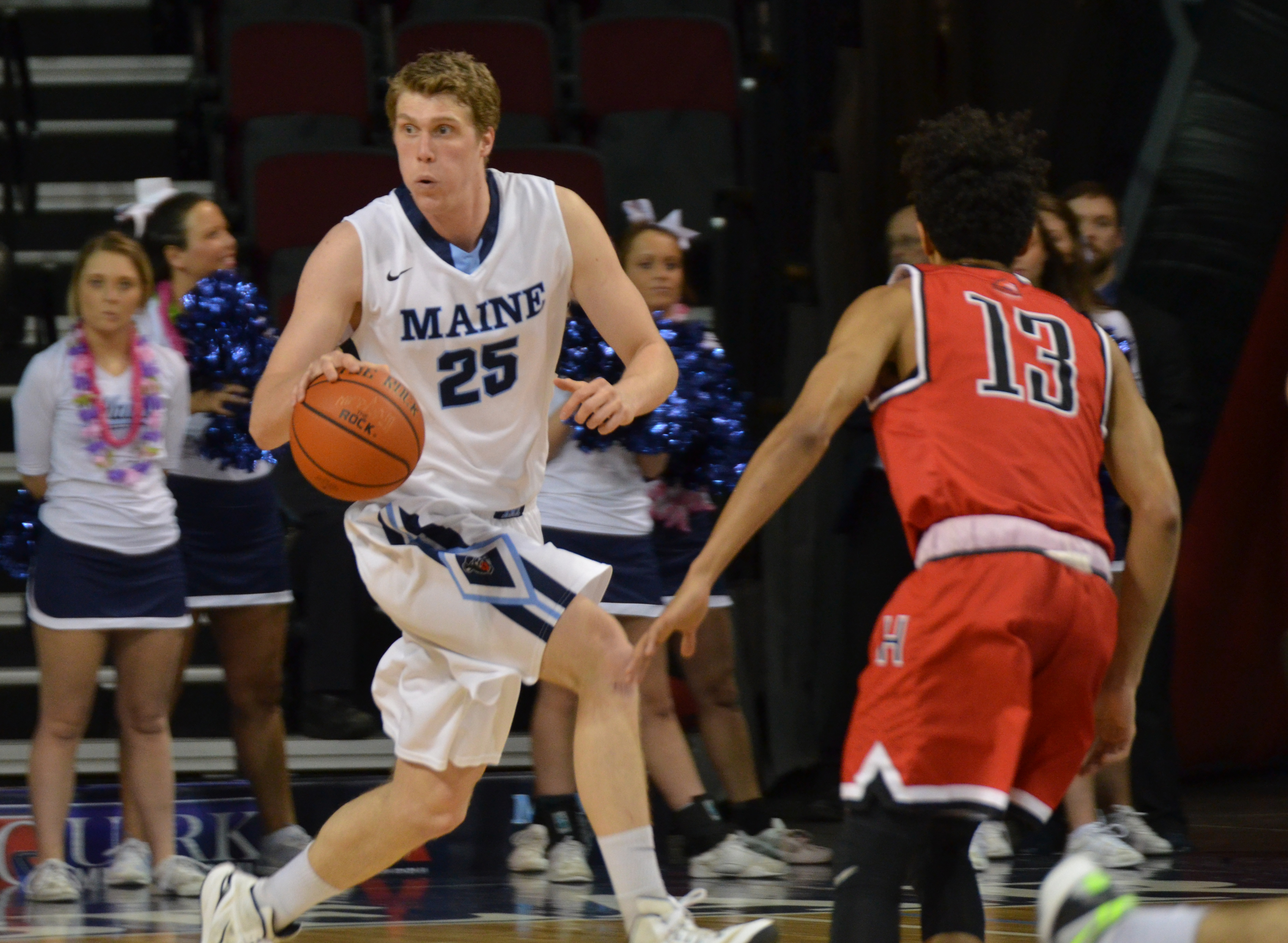 In their last away game of the regular season, Maine’s women’s basketball team held on to win a tight contest over Hartford 50-44 on Wednesday. The win didn’t come easy, as the Hawks found a way to bring the game to within four points in the last minute, but Hartford was ultimately unable to seal the comeback.

With their 11th victory in a row, the Black Bears now jump up to 23-7 on the season, matching their win total from last year. Their record within America East games also increases to 14-1. For the Hawks, the team now stumbles to 11-7 overall, while still holding a 7-8 mark in conference games.

Third-year guard Sigi Koizar led the Black Bears in scoring, as she went 5-14 shooting. She gave the team 15 points, along with three rebounds and two assists. Fourth-year forward Mikaela Gustafsson also put up a solid performance with 11 points and five rebounds.

Maine was noticeably more accurate on most of their shots. The Black Bears went 21-47, while hitting the net 44.7 percent of the time. On the other hand, the Hawks went 17-50, reaching the basket on 34 percent of their attempts. Hartford performed better from the three-point line as they hit 6-21, while Maine only managed to make 4-16.

In the first quarter, fourth-year forward Bella Swan got the Black Bears on the scoreboard first with a quick layup. With the help of a three-pointer and a layup from fourth-year guard Sophie Weckstrom, Maine found themselves holding on to an early seven point lead. However, Hartford battled back as the quarter ended at 11-8 in favor of Maine.

The Black Bears brought a balanced offensive attack in the second quarter, but were unable to pull ahead significantly. Gustafsson gave Maine a jump shot and a layup right before halftime to help the team outscore Hartford 13-7 in the period. Halfway through the game, Maine held the 24-15 advantage.

Second-year forward Janelle Harrison wouldn’t let Hartford slip in the third quarter, as she gave the team three free throws, a jump shot and a layup, all of which helped the Hawks climb back. Despite Hartford’s resurgence, Koizar closed out the third period with a trio of free throws, allowing Maine to keep a 39-31 lead heading into the last 10 minutes of the match.

Early in the final quarter, Gustafsson hit a layup, putting the Black Bears up by 11 and giving them their largest lead of the game. But the Hawks were not out as third-year guard La’Trice Hall rallied the team back with two layups and a jump shot. With less than three minutes remaining, Hartford scored seven consecutive points to climb back to within four. With only 30 seconds left and the game on the line, Koizar hit a crucial jump shot for Maine, ending any hope of a comeback for Hartford. As the clock expired, Maine held on to win the game by a narrow 50-44 margin.

Hartford’s biggest problem was that they didn’t have any consistent scorers. Harrison led the team in scoring with 10 points and six rebounds, despite starting the game as a reserve. Though Hall only had six points throughout the entire game, she also put up six rebounds and two assists.

For the first time since 2004, Maine’s women’s basketball team has fought their way to 24 wins in a single season. Their latest victory came during senior day when Binghamton scored the fewest points that any team has against Maine all year, as the Black Bears dominated the Bearcats 69-37 on Saturday under the bright lights of the Cross Insurance Center.

With the victory, the Black Bears have now won 12 games in a row while also closing out the regular season with a perfect 12-0 record in home games. Standing at 24-7 overall and holding a 15-1 mark within America East games, Maine will either be awarded the America East regular season title or they will share that honor with Albany, depending on the outcome of the Great Danes’ last game on Sunday. The loss puts Binghamton down at 13-16, with a split 8-8 mark in conference games. As always, senior day was a memorable day for many of Maine’s fourth-year players.

“We’ve put our hearts and souls into this team and we’ve come together as a family, we always have each others back so that makes it even more special for me,” fourth-year forward Liz Wood said.

When it came to scoring, Koizar led the match with 19 points. She went 7-15 on throws, while also maintaining a 3-6 mark from beyond the three-point line. She also added six rebounds, four steals and three assists. Behind her, Swan grabbed 11 rebounds and 10 points, while Gustafsson also notched 10 points and three rebounds.

After a rough start, Maine’s accuracy vastly improved and they finished the day by going 25-60 on shots, while hitting the net 41.7 percent of the time. Meanwhile, Binghamton went 14-55, only making about 25.5 percent of their attempts. When it came to three-point shots, the Black Bears finished 7-20, whereas the Bearcats went 1-13.

In the first quarter, Maine opened up with a three-point shot from fourth-year guard Sophie Weckstrom, followed closely by a pair of free throws from Swan. Despite the Black Bears’ early five-point advantage, the Bearcats battled back with six unanswered points to snatch away the lead. Though fourth-year guard Lauren Bodine managed to snag two key steals in the final minute, Maine failed to capitalize on either takeaway. With both teams struggling offensively, the first period ended in a 9-9 tie. Accuracy plagued Maine in the first period as they went 2-16 on shots, while also only going 1-6 from the three-point line.

With two free throws and a jump shot from Koizar, the Black Bears came out of the gate strong in the second period. Continuing off the momentum Koizar gave them, the team scored 10 unanswered points, capped off by a layup from Gustafsson. In the final three minutes, Maine again went wild as Swan scored a trio of layups, and along with an additional layup from Weckstrom, managed to end the quarter by scoring eight consecutive points. After outscoring Binghamton 18-5, Maine marched into halftime up 27-14. Despite creating a noticeable gap on the scoreboard, the Black Bears acknowledged that they missed some easy opportunities.

“We had good looks it seemed like every possession,” Head Coach Richard Barron said. “Some of the shots seemed maybe a little rushed, we seemed a little flat. We weren’t getting the ball over the front of the rim.”

The third quarter began with more pressure from Koizar as she hit two layups and a three-pointer. However, second-year forward Alyssa James wouldn’t give up for Binghamton as she made two jump shots and a layup. In the last seven seconds, fourth-year guard Chantel Charles sunk a layup, helping the Black Bears outscore the Bearcats 13-10, while giving Maine the 40-24 lead heading into the game’s final 10 minutes.

Maine refused to slow down in the fourth quarter as Koizar scored eight points, followed closely by another seven from Wood. Trying to keep up, James carried Binghamton with a trio of free throws, a jump shot and a layup, but it was too late for the Bearcats to climb back. In the last five minutes, fourth-year center Anna Heise put the game out of reach with six points. Coming off the bench, first-year guard Isabel Hernandez Pepe hit a three-pointer, giving Maine the game-high 32 point lead and ending the contest with a final score of 69-37.

For the Bearcats, James’ performance stood out as a highlight. She led Binghamton in scoring by tallying 18 points along with five rebounds. Fourth-year guard Kim Albrecht also had a solid game as she put up 11 points and three assists. Despite James’ production, Binghamton’s Head Coach Linda Cimino believed that the team could have utilized her talents more.

“We’ve got to do a better job of getting her the ball,” Cimino said. “The fact that our guards weren’t making shots allowed Maine’s defense to keep collapsing on Alyssa (James) and that limited her opportunities.”

Though the regular season ended, the Black Bears will get a chance to keep their win streak rolling as they enter the America East Quarterfinal rounds on March 5. While they may not know who their opponent is yet, the team knows that their biggest games are still ahead of them.

“We still know that we have basketball to play, so we are not thinking about this as an end,” Barron said. “I think we’re all excited about moving forward and we have a lot of pretty high aspirations about what we’re going to do beyond today.”