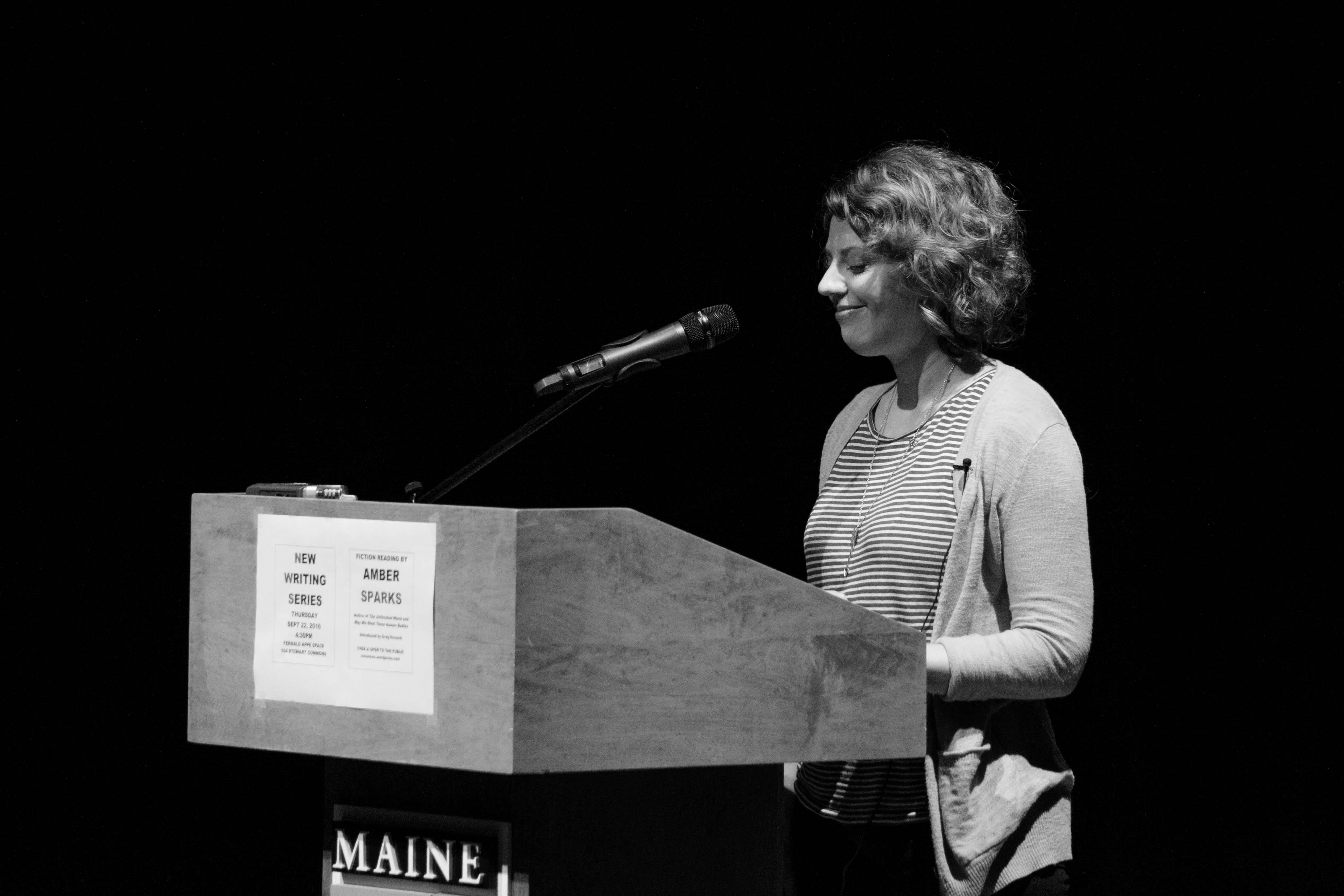 “Amber Sparks has always had an interest for horror,” University of Maine professor Gregory Howard said when introducing the prolific writer to the New Series Writing reading on Thursday, Sept. 22, “…but Amber Sparks doesn’t write horror. Or does she?”

Sparks writes somewhere in between the realms of several genres, dabbling in the strange, eerie, and mythical. During the event, she read three pieces from her newest collection of short stories, enthralling her audience with the tales of space janitors, time travelers and criminals. Sparks has currently written two books; “May We Shed These Human Bodies” and her newer work, “The Unfinished World and Other Stories”. She also co-wrote “The Desert Places” and her works have made appearances on National Public Radio and in anthologies.

Although originally from the Midwestern United States, Sparks currently lives in Washington D.C. with her family. Despite being far away from home, Sparks assured her audience that it was exciting to be in the state of Maine.

When the first people began arriving at the event, the man running stage crew reminded guests to set their cameras to manual, stating that the atmosphere the dark gray walls with the lighting on the author created was perfect for putting all the attention on the reader. “People aren’t supposed to know I’m here,” he mentioned further. Professors, students, and others all gathered, sitting down in chairs ready to hear Sparks read. Once Sparks arrived at the podium, everything was quiet. The lighting was perfect. When she read, everyone’s eyes were on her.

During the question-and-answer portion of the reading, Amber Sparks fielded questions about her editing process, character creation, and life experiences. Sparks had been an actor before pursuing a career in fiction, telling a humorous story about learning how to read in front of an audience as an author and not as an actor. “I still think readings shouldn’t be boring and I still try to be expressive when reading my stories. I try to avoid poets’ voice,” Sparks said, “however, I am really good at reading to children now.”

Another fascinating thing about Sparks is how her love of horror and mystery followed her in her writing. For her short story “Janitor in Space” Sparks answered a question on inspiration for characters by discussing how her opening piece for her collection had once been a story about the accomplice surrounding the Charlie Starkweather killings, but later revised the story to its completely fictional life, about a person doing something so terrible, the character felt the need to attone for the rest of her life.

Sparks also went into depth about how she worked as a storyteller, discussing her own writing process. “There are some writers that like to write and there are writers that like to edit. I’m one of the writers that loves to edit. Most of what I consider my style is in the editing,” Sparks explained. Other things Sparks mentioned about her writing included her drive to give female characters voices, especially considering how many of the extremely old fairy tales and related tales were brutal, scary, and told by women themselves.

Attendees of the New Writing Series continued to talk with Amber Sparks even after the event. Many students talked with her about how they appreciated the way her writing embraced the obscure, kept information from the reader and grappled with the of time as a character in her stories. “I’m so happy that “Thirteen Ways of Destroying a Painting” was read,” one student mentioned during the reading. “It’s one of my favorites.”