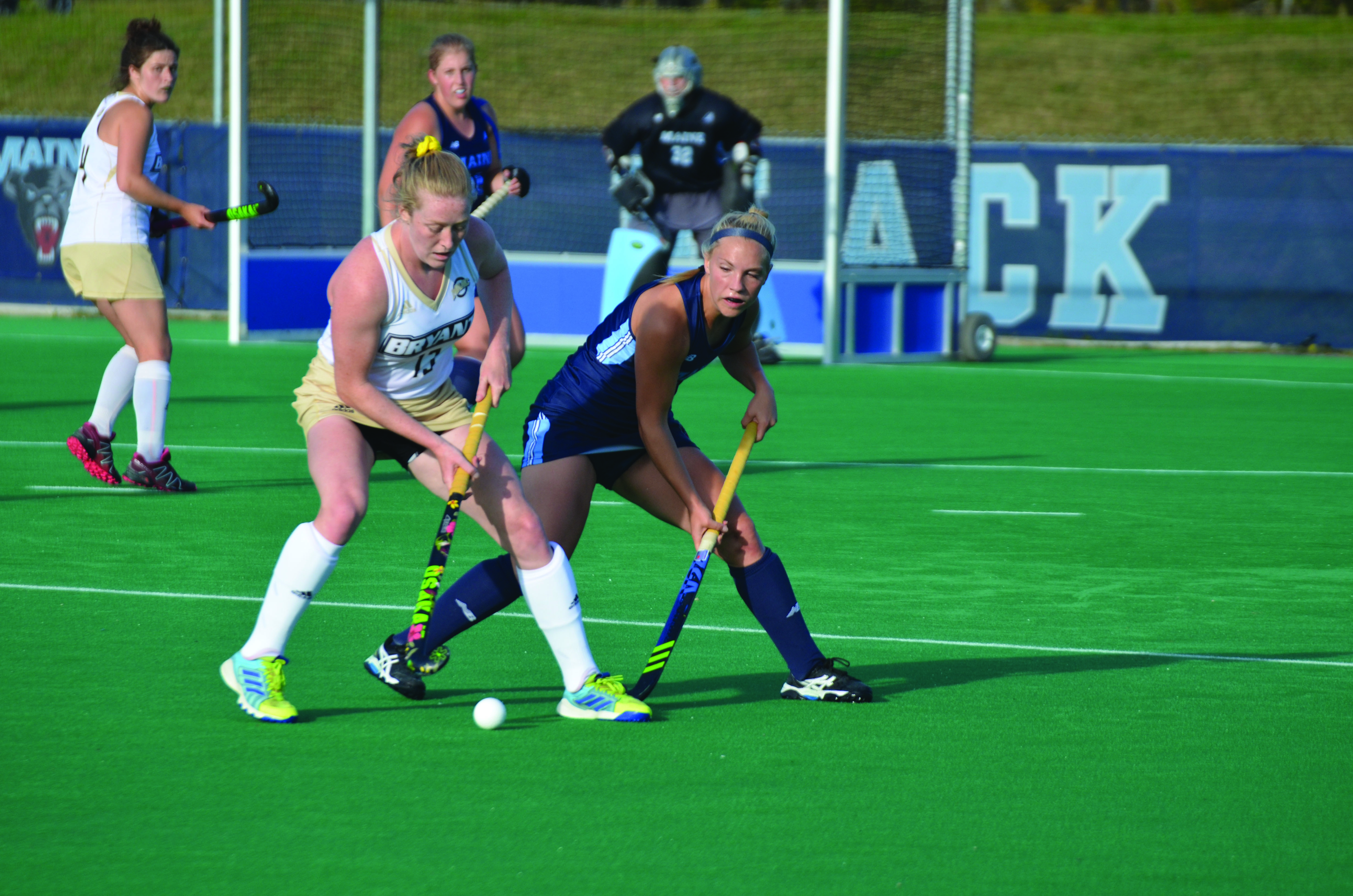 No. 20 University of Maine continued its impressive start to the season by posting a second consecutive shutout against Bryant University 2-0. The Black Bears added another win to the books and improve to 6-1. The Bulldogs were unable to get their first win of the season, dropping their seventh straight game and fall to 0-7.

Defense on both teams stood their ground for most of the first half by blocking several shots. With just 1:29 remaining, second-year midfielder Casey Crowley put one in, assisted by first-year midfielder Riley Field and second-year back Samantha Wagg. This was Crowley’s sixth goal on the season.

“After that hat trick against California-Davis, this goal felt even sweeter since it was the game winner,” Crowley said.

Maine finished the half with 10 shots with four on goal. Bryant University had one shot, which missed the goal.

Redshirt third-year goaltender Emma Cochran started in goal for the Black Bears, while second-year goalie Marissa Elizardo started for the Bulldogs. Elizardo made three saves in the first frame.

Maine Head Coach Josette Babineau switched goalies halfway through once again, as redshirt third-year Emily Corbett came into the game for the second half.

“We try to give our team the best opportunity to win and it has proven with two straight shutouts,” Babineau said.

With 16:24 remaining in the second period, Wagg scored for the Black Bears to double their lead to 2-0, assisted by second-year midfielder Libby Riedl and second-year back Ella Mosky. This was Wagg’s fifth goal on the season.

That is all the scoring the game would see, handing Bryant their sixth shutout of the season. In the second half, Maine had 10 shots with two on goal and Bryant had four shots with one on goal. Corbett made one save, while Elizardo also made one.

“I felt strong, but Maine was able to keep getting shots on me and a couple got through,” Elizardo said.

Bryant University played next on Sunday, Sept. 18 at 1 p.m. on the road against the University of Vermont.

“We put in a great effort, but unfortunately came up short. Hopefully we can bring a positive attitude to the game on Sunday and get our first win,” Bryant Head Coach Shaunessy Saucier said.

No. 20 Maine squared off in a tough matchup against No. 3 University of North Carolina. It was a competitive game, but the Tarheels were too much to overcome as the Black Bears fell 3-1. Maine dropped to 6-2, while North Carolina improved to 6-2.

The Tarheels opened the scoring just seven minutes in when fourth-year forward Lauren Moyer put one in, assisted by fourth-year back Julia Young and third-year forward Gab Major. This was Moyer’s fifth goal on the season.

“Scoring the first goal of the game is always a good thing, that way we control the momentum,” Moyer said.

About 10 and a half minutes later, third-year forward Madison Cummings scored to tie the game. This was Cummings’ 10th goal of the season.

“It felt great to tie the game against a tough team, we just couldn’t get back in it at the end,” Cummings said.

Only two minutes after the contest was knotted up, Moyer scored a second time to get the lead back for the Tarheels, assisted by fourth-year midfielder Caroline Plyler. This was Moyer’s sixth goal on the season.

To start the second half, Babineau, following her usual pattern, brought in the other of her two goalkeepers, Cochran. North Carolina Head Coach Karen Shelton also made a similar move, bringing second-year goalie Alex Halpin into the game.

At 2:21 of the second half, Maine had a great chance to tie the game at 2, but fourth-year forward Danielle Aviani’s shot hit high off the post, which redirected out of play.

The Tarheels increased their lead to two goals at 8:15 of the period, where redshirt first-year midfielder Catherine Hayden scored. This was Hayden’s second goal on the season.

With 11:22 remaining in the game, the Black Bears took a timeout to try to regroup and hopefully get two quick goals to get them back in the game.

In a rare move with 1:08 left, Babineau pulled the goalie to get another position player on the field.

“I thought it would make sense to make the move, particularly because there wasn’t much time left and we needed another player trying to score down the field,” Babineau said.

Maine couldn’t muster a comeback and unfortunately came up short against a tough North Carolina team.

The Black Bears finished the second half with two shots and none on goal and the Tarheels were identical like the first half with five shots and three on goal. Cochran made two saves, while Halpin made one.

“Maine really played us well and kept the game close. I give them credit and we’ll be aware when the playoffs come around,” Shelton said.