The men and women’s rugby teams kicked off their season this past Saturday, starting what for many players will be their last season on the team. Both teams started the season of with a win; the women’s team won against Colby College 17-5, while the men won 24-10 against Maine Maritime Academy.

Although rugby is not a NCAA sport, it has grown in popularity in the past years. For Maine specifically, the teams have become more established in recently.

“Something that has changed in the last few years is the competitiveness of the team. It’s not a huge popular sport yet, it’s still growing,” third-year lock and Vice President Christina Koumpouras said. “The teams weren’t super established but we have definitely changed a lot and we are trying to make things more structured.”

Fourth-year full back and President Molly Fitzpatrick was one of the few members of the team who had some experience with rugby before playing for Maine. Fitzpatrick played for Portland, Maine in high school and then played for University of New Hampshire her first year before transferring to Maine and joining the team here.

“The hardest part for women’s rugby is getting people out of their comfort zone and hit and tackle and be as physical as they want,” Fitzpatrick said. 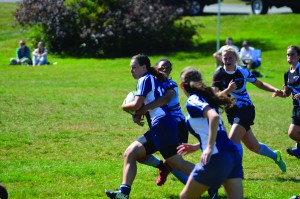 Although the men and women’s teams play with the same set of rules, they are two separate sports clubs at the university. The men’s team cited another part of the sport being more difficult: the running. Many of them played football in high school, but deciding not to continue playing at Maine, made the switch to rugby. One of the main differences between football and rugby is that rugby does not stop unless the ball goes out of play or someone scores, whereas for football there is a lot more starting and stopping.

“You are huffing and puffing the entire game, you don’t catch your breath,” fourth-year scrum half and President John Golder said. “You learn to be dead and run.”

The training is similar to football, but there is a lot more running incorporated to help the players be able to play for the entire game. Another difference between rugby and other sports is once you sub out of the game, you can’t go back in. This requires a significant amount of endurance and stamina.

Despite the extreme athleticism of the sport, there is a universal sense of comradery between the teams.

“A lot of us played football so you get that sense of brotherhood, but there’s something about this sport…there’s even a brotherhood between teams,” fourth-year side flanker and Vice President Nick Oswald said. “You’re super aggressive in the game but as soon as it’s over, you’ll just grab a couple beers and hang out. It’s very gentlemanly.”

It’s not just after the game though. During the game there is still a respect for the game and for the competition amid the hitting and tackling of the sport.

“There’s not any talking crap on the field. It’s always nice. Everyone tackles correctly because they don’t want anyone getting hurt,” Koumpouras said.

On the Maine teams especially, the team dynamic is an important aspect to the sport. The team has to be cohesive and communicate well order to play successfully.

“The dynamics of how the game works. If your team isn’t working together then nothing is going to happen,” Fitzpatrick said.

The sport seems to hook people in right away. For Golder it took one practice for him to decide to give it a shot.

“I got approached when I was working out at the gym. I didn’t even really know about rugby before that, but they said ‘come out, just do a practice to see what it is,’” Golder said. “It took one practice and I was hooked.”

Many of the members said that it is not just the sport itself but the people on the team that got them hooked. The team is friends on and off the field.

“The best part is that we are such a positive support system. The greatest thing is the mindset of everyone,” Fitzpatrick said. “We are so happy to be there for each other and it’s not just during practice and during the games, it’s outside too.”