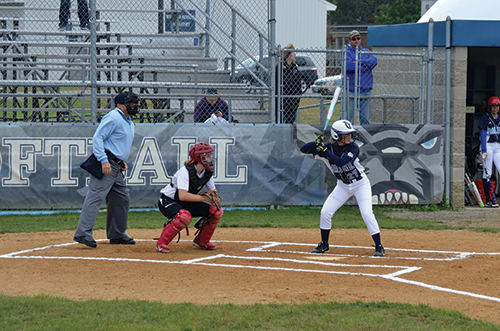 The Women’s Fastpitch Softball Club made their season debut at home this weekend against the University of New Hampshire (UNH) in a three-game series on Sunday, Sept. 25. The team has gone through a lot to get to this point.

Second-year graduate student co-president and third-baseman Meghan Connelly has seen the club at all levels of functioning. When she first joined the team there were five members and no real practices or games. It came down to Connelly and fourth-year co-president and outfielder Samantha Johnson having to organize themselves and become a part of the National Club Softball Association.

Now as a member of the association, they compete against five teams during their regular season: UNH, University of Vermont, Merrimack College, University of Massachusetts Amherst and Northeastern University.

“Now, we are a lot more competitive and a lot more involved,” Connelly said.

The team currently has 17 girls. All of them found their way to the club through their mutual love of the sport.

“There is obviously a huge group of girls that love to play and all reach out to us, which is awesome, versus what we used to have with no one showing up to practice,” Johnson said.

The team holds four practices a week. They held tryouts for competitive versus practice teams, but everyone made the competitive team.

This is third-year catcher Lauren Guptill’s third season on the team. She heard about it from a friend and started attending practices the spring of her freshman year, but the team did not actually get in full swing until her second year.

“It’s so much more involved and you feel so much like a family,” Guptill said. “You’re fighting for your position but you are doing it in a fun way.”

One of the difficulties that the team faces is getting everyone to be able to come to practice and put in the time to get to know each other.

“It’s pretty tough with schedules because we all have different majors and are taking different classes,” first-year center field Colleen Sullivan said.

Despite it being the club softball team, there has been a lot of cooperation with the University of Maine Softball team.

“They have given us a ton of extra equipment, bats, old jerseys. They have been amazing to us,” Connelly said.

Everyone on the team came into college having significant softball experience and gravitated to the softball club for different reasons.

As a newer member of the team Sullivan had hoped to play for the UMaine team, but when that didn’t work out she decided to play on the club.

“I still definitely wanted to play softball in college because it just means so much to me,” Sullivan said.

Guptill didn’t have any plans of playing Division 1 softball but still wanted to continue playing a sport she enjoyed.

“I went club because it’s more laid back and you don’t feel so much pressure,” Guptill said.

No matter how the players ended up on the team, the team hit the ground swinging this fall kicking off their season four weeks into the semester with the series against UNH. In their opening game against UNH, the team went 1-2, losing the first two games 7-4 and 10-2 respectively. The team came back and got a win on the season in their last game of the tripleheader with a score of 2-0.

They will have two more weekend series at home after their games on Sunday, with games Oct. 1, Oct. 2 and Oct. 22 all played here at UMaine.