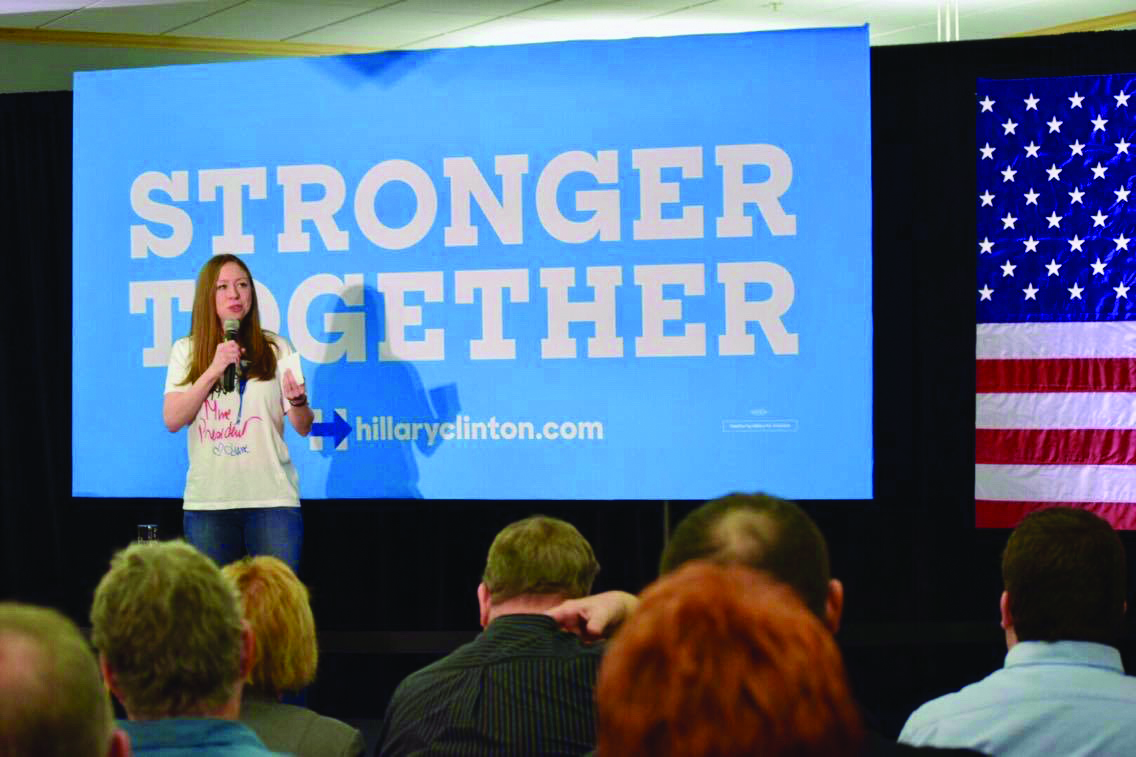 On the morning of Thursday, Oct. 13, Chelsea Clinton, daughter of former U.S. President Bill Clinton and former U.S. Secretary of State Hillary Clinton, made an appearance at the Wells Conference Center on the University of Maine campus.

Chelsea Clinton came in support of her mother, the current Democratic Party candidate for president. With the election coming up on Tuesday, Nov. 8, Clinton spoke to her mother’s supporters and answered questions about her plans if elected.

Clinton started the discussion by thanking the audience for their attendance and for supporting her mother. She explained that as a parent of two, family is an enormous part of her life and she is extremely proud of everything her mother has accomplished thus far.

“I am deeply passionate about my mother,” Clinton stated. “I am unapologetically, fiercely proud to be her daughter and equally bias towards her.”

Clinton added that the current election is the most important of her and the audience’s lifetime. The concerns the nation is facing, such as climate change and equal rights for women, are all issues that Hillary Clinton has a plan for.

Clinton brought up her mother’s opponent Donald Trump and how he has “often criticized her for being too prepared.” She explained that her mother “sweats on the details,” which Trump has never seen as a necessity. Clinton explained that the details do matter — for the future of our planet.

“It does matter to me that when my mom talks about raising the minimum wage, she always talks about finally getting equal pay for equal work, because if we raise the minimum wage and women are still paid unequally we won’t really have lived up to our values. And she also talks about the need to finally eliminate the only legal discrimination that exists in our country — because it is still legal to pay persons with disabilities less than one third of the federal minimum wage. And so actions matter and so do words.”

She then highlighted the unfortunate rise in the “normalization of hate speech.” She discussed what is known as the “Trump effect” — a rise in racial bullying. Clinton told a story of a woman she spoke to after a rally recently in Pennsylvania. She was a single mother from Guatemala who had immigrated twelve years ago and had a 12-year-old son, both of whom are now U.S. citizens.

The woman explained to Clinton that within the first two weeks of school this year, her son had been targeted by three different children, telling him, “Go back to Mexico,” and “I can’t wait till we build a wall to keep people like you out.”

Clinton said in response to the audience, “When we say our kids are listening, this is not rhetorical. These are stories that tragically are not unique and even if they were happening just once it still would not be acceptable.”

Clinton then answered questions about her mother’s “new college compact” plan. She discussed her mother’s own celebration of finally paying off her college loans. “We celebrated,” Clinton said. “It was a big deal and it was when you wrote checks out, so it was the final check.”

Clinton explained that her mother has various plans in place for college students to avoid massive amounts of college debt. First and foremost, Clinton believes that federal loans should be reset to the lowest interest rate. One plan to reduce college debt is to set up a system of loan repayment through service jobs such as jobs in medicine or law enforcement. Another idea includes paying back loans through a percentage of an individual’s income.

“We have a lot of work to do, but we’re going to keep talking about what we think is actually right for the sake of this election,” Clinton said.