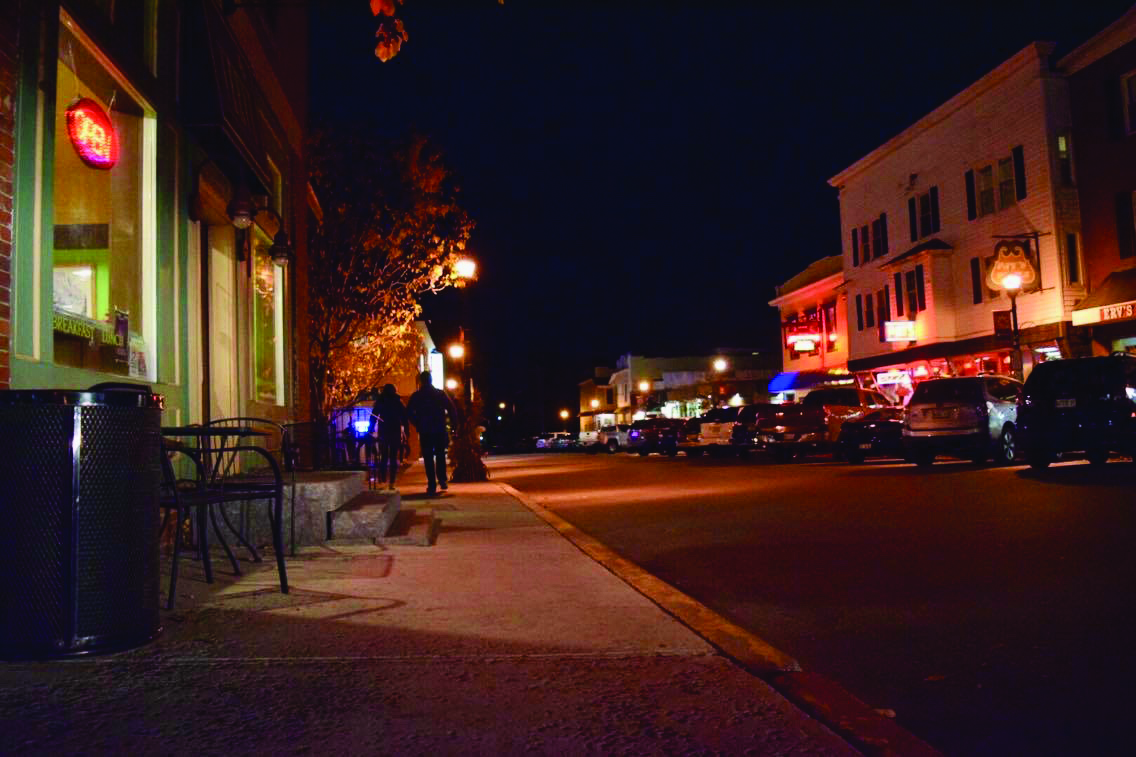 Over the past few years, several new establishments opened up all over Orono. The Family Dog restaurant (2012), Marsh Island Brewing (2015) and a new coffee shop Nest located at 24 Main St. will be opening soon. What is bringing these businesses to downtown Orono? Likely the more than 10,000 people studying two miles away at the University of Maine.

Orono is part of the Bangor metropolitan area. More than 6,300 people work in Orono. Yet, many university graduates choose to move to bigger cities, like Portland or Boston.

That was not the case for Maine natives Mark Horton and Abe and Heather Furth. The University of Maine brought them to Orono, and shortly after graduating, the three of them partnered together to start Woodman’s Bar & Grill.

“Around this time in 2004, Abe asked me what I was going do now that I graduated,” Horton said. “I said I couldn’t do much with my psychology degree, so I’ll probably go to grad school, go out west, or maybe open a restaurant.”

At the time, Abe and Heather Furth were also thinking of opening a restaurant, and soon enough, in May 2005, the doors of Woodman’s opened to the public. The new place was well-received right from day one.

“A lot of people came out that first day to support us. It was the first time something new had opened in Orono for a while,” Horton said.

Over the summer, Woodman’s was able to grow a good base of local regulars. As the school year rolled around, students discovered a new favorite spot and Woodman’s continued to grow from there.

“We liked Orono and the idea of staying here,” Horton said. He shared that at the time he graduated from UMaine, there were only a few places to eat: the Bear Brew Pub, Margaritas Mexican Restaurant, Pat’s Pizza and Thai Orchid.

“We felt like there was a good market for us starting a restaurant but focusing on higher end, making it a place that could cater to professors, professionals at the university, as well as students.”

The managing team at Woodman’s also works toward exposing their audience to the bands around Orono and Bangor. On Wednesday evenings, Tough End String Band shares old-time, bluegrass and jazz music. Most Fridays, a live band plays at Woodman’s; Wyld Lyfe, a music band founded by UMaine students in 2012 played at Woodman’s numerous times.

“I think it was part of our success, understanding that providing things such as entertainment for the community is important,” Horton said. “In the summertime we have locals and regulars, and during school year we get that extra business from college students. In a town this size, you wouldn’t have this many restaurants if it wasn’t for the influx of college people.”

Across the street from Woodman’s, Margaritas has been a longtime favorite for students attending UMaine. Margaritas is a New England-based Mexican restaurant franchise that has been in business for over 25 years, with 25 restaurants throughout the Northeast. The very first Margaritas opened right here in Orono in 1985.

“Without the college students, we wouldn’t do half the business we do,” Stephen Klenwoski, a bartender at Margaritas, said. “It’s tough to get by with just regulars, and summers are a little bit slower. Continuously having new people come each semester and year, I think that’s what keeps us afloat.”

Margaritas offers a college discount on Wednesdays. College students enjoy 50 percent off entrees with their school ID. Margaritas also collaborates with UMaine clubs and organizations through Noche Mexicana (Mexican Night) fundraisers. Twenty percent of all pre-tax, food and beverage purchases by the fundraiser participants will be donated to nonprofit school organizations.

Buddy Syphers, general manager of Bear Brew Pub, recalled that Margaritas had El Cheepo’s, a space in the basement where people could dance and get some drinks.

Currently, only the Bear Brew offers a space in downtown Orono where UMaine clubs and organizations can rent out a dance space for fundraisers, formals and dance parties. UMaine’s International Student Association (ISA) has been hosting Oronoka, an international dance party, in Bear Brew for several years.

“We want to help the kids out, make sure they have a safe environment for them to have fun,” Syphers, who has been working in Bear Brew since 2010, said.

Syphers shared that most of college students are unaware that Bear Brew serves food.

“We are a full-running restaurant. They think we only have a night club and serve beer,” Syphers said.

Indeed, Bear Brew offers a variety of pub food and their speciality brick oven pizza. On Thursdays, college students with their school ID get half-off on brick oven pizza with a purchase of a beverage.

If you want to get your homework done with a cup of good coffee, the Store Ampersand could be a place you were looking for. Located at 22 Mill St. this coffee shop and gourmet foods store was bought by its current owners Roberta and John Bradson in 1995.

UMaine graduate student Akbar Shakib believes that despite having so many different businesses, Orono is still missing something.

“Starbucks is missing in downtown Orono. We don’t have a study place where we can go when you need to study the whole night. We need a place that’s open for 24 hours,” Shakib said.

University Singers spice up the night at Minsky Hall
OHOP completes renovations, looks toward the future