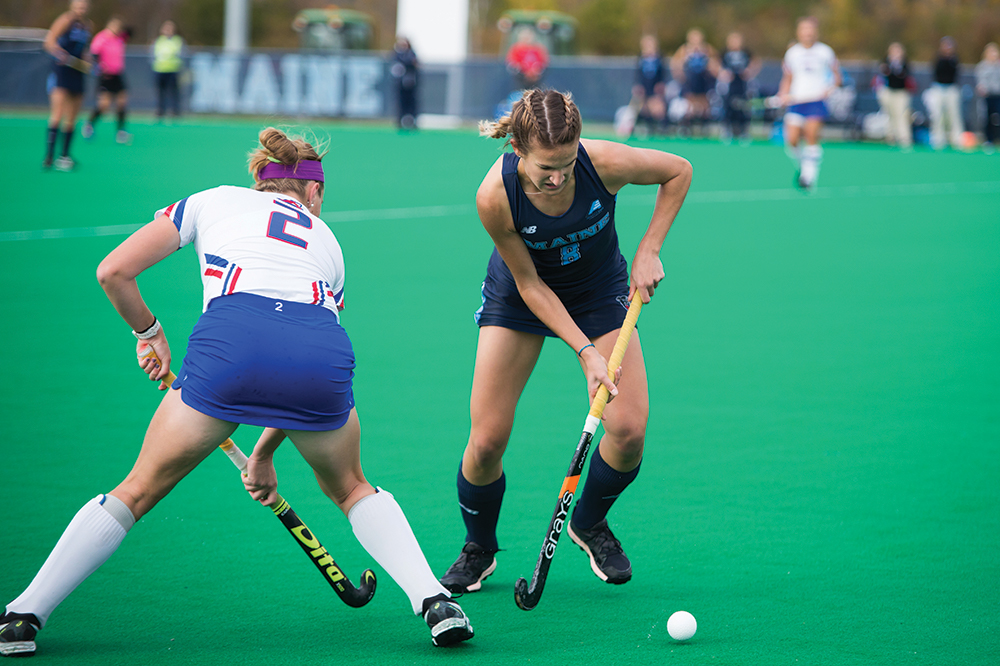 In a regular season rematch on Friday, Oct. 20 between the University of Maine (11-5) and University of Massachusetts Lowell (7-8), the Black Bears were once again victorious, shutting out the River Hawks and winning the affair 3-0.

During the first half no one was able to capitalize, as the score was tied at 0 at halftime. There were several missed opportunities by both teams, particularly on penalty corners, where Maine had three and UMass Lowell had five.

Second-year back Ella Mosky took the corner after a green card was called on fourth-year midfielder Annie Villare for shoving someone in the back with 27 seconds remaining in the half. Mosky placed the ball to the center for an opportunity at the goal, but Maine was unable to get a shot off and the half ended.

Maine finished the first frame with five shots and one on goal, while UMass Lowell also had five shots with four on goal.

“I was pretty comfortable during the first half, but Maine was just able to put pressure on us in the second half. They were getting so many shots and we couldn’t get it out of the zone to help ourselves,” Berkhout said.

Maine Head Coach Josette Babineau slated redshirt third-year goalkeeper Emily Corbett into the game for the second half, hoping to keep the game in her advantage.

“The move really helped us this time, where we were able to limit their chances in front of the goal. We worked exceptionally well in the offensive zone and we put some in to secure the win,” Babineau said.

The Black Bears were finally able to put one on the board at 40:41 of the game, as Mosky scored to give Maine a 1-0 lead. The goal came after Mosky took a penalty corner and second-year midfielder Casey Crowley took a shot that was saved by Berkhout, giving Mosky an opportunity on the rebound. This was Mosky’s third goal on the season.

“After not cashing in on the corners in the first half, I finally got a chance to score. It gave us some momentum and we didn’t stop putting the pressure on them,” Mosky said.

The River Hawks could not get themselves out of danger and surrendered another goal at 64:21 of the game on a goal by Riedl, her second of the matchup, assisted by fourth-year forward Danielle Aviani to give Maine a 3-0 lead. This was Riedl’s sixth goal on the season.

“It was a relief to put the game away, especially on my second goal. We controlled the second half and never looked back,” Riedl said.

Offensive play by Maine was completely overwhelming for UMass Lowell in the second half, as the Black Bears continued to pour on shots and didn’t give the River Hawks any chances to counter their play.

Maine finished the second half with 11 shots on goal, while UMass Lowell only had one shot that didn’t hit the goal. Berkhout made eight saves in the half.

“They dominated us on the offensive end and we couldn’t match it. I credit them for playing their strengths and that’s something we have to focus on our next time out,” UMass Lowell Head Coach Shannon Hlebichuk said.

Field Hockey Gets Shutout by Albany

During another regular season rematch between America East Conference foes, Maine looked to avenge their 3-1 loss to Albany on Sunday, Oct. 2. On a day after the Black Bears shutout their opponent, they were shutout by the other team this time, losing the contest 2-0.

For much of the first half, the defensive play on both sides kept the offenses off the board. There was only one penalty corner, which was taken by Maine’s Mosky.

“We try to get into the best position to get a good shot off, but it didn’t work out today. I hope we can capitalize in the next game against UNH,” Mosky said.

Albany opened the scoring with just 3:15 left in the first frame, as redshirt third-year forward Molly Mariano scored to give the Great Danes a 1-0 lead, assisted by first-year midfielder Dana Bozek. This was Mariano’s 10th goal on the season.

“The game was solidly played by both sides and I’m happy with the way we handled it. After getting the goal before halftime, we can look at it as the time we won the game,” Mariano said.

Maine finished the first half with two shots on goal, while the University at Albany had one shot on goal, which put them on the board.

Babineau did the same thing as the previous and numerous times before, as Cochran entered the game at the start of the second half.

The Great Danes finally got their first penalty corner opportunity of the game at 38:40, which was taken by Bozek. The ball hit fourth-year midfielder Paula Heuser’s stick and Bozek put it in for a goal to give Albany a 2-0 lead. This was Bozek’s fourth goal on the season.

“Going up by two goals really put it away because of how each team was playing. It’s nice to leave here with a win, but that’s not to say Maine is a good team,” Heuser said.

At 66:05, Maine called a timeout to make a plan of how to get back into the game with little time remaining. Babineau decided to remove Cochran from the game and put another player on the field. Second-year back Samantha Wagg put on a green pinnie to signify that she was playing in the goalie position.

“There wasn’t much time left and I had to make a decision that would help the team as best as possible. Unfortunately we fell short and we’ll work on some things and try to get a win the next time out,” Babineau said.

The Black Bears could not find the back of the goal despite controlling the time of possession and commanding the number of scoring opportunities in the second half.

“I couldn’t stop chirping at the refs, mostly Todd, because so many trips were called. I’ll get over it since we got the win, but we can’t let Maine have the ball for the entire half. Our defense did well, but that’s not how we always want to play,” Albany Head Coach Mike Sykes said. 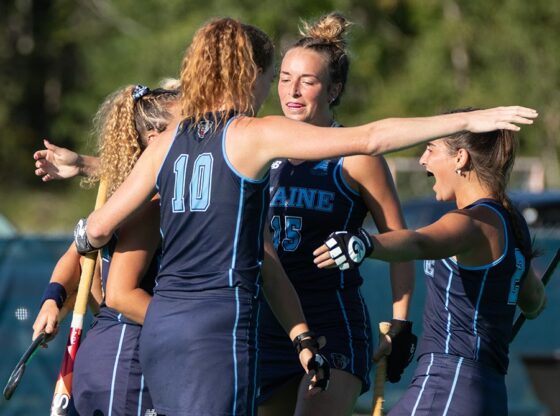