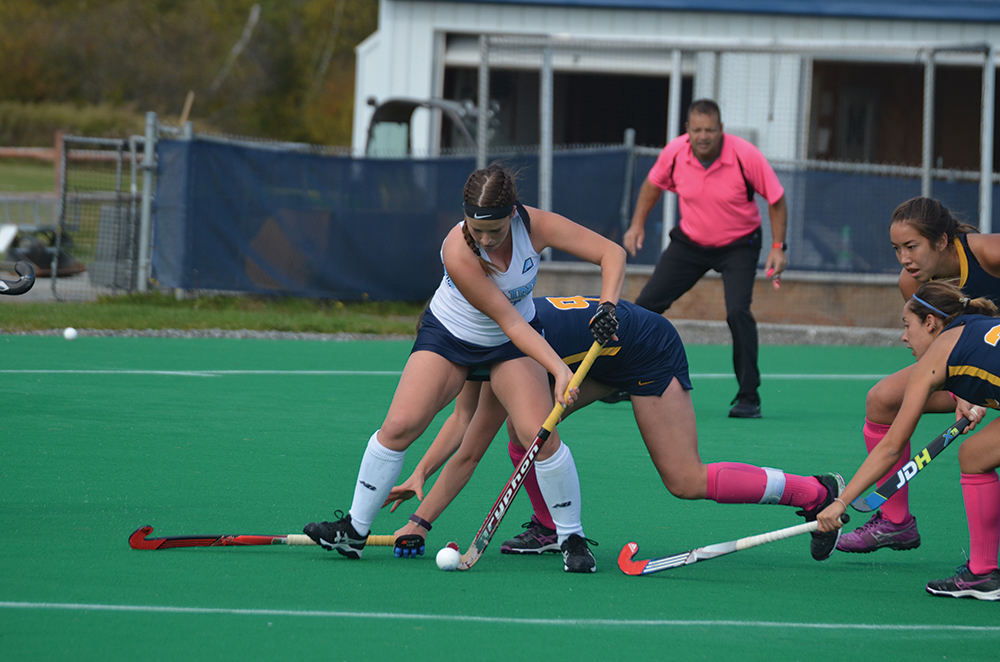 University of Maine women’s field hockey took the whole 70 minutes and then some to take down conference foe University of Vermont on Friday. Second-year back Ella Mosky scored three minutes into overtime to give the Black Bears a 3-2 victory over the Catamounts. It was Mosky’s second goal of the season as Maine improved to 3-1 in conference play and 10-4 on the season. Vermont is now 6-8 overall and 0-4 in America East.

“Obviously a big moment for me, but a big team win too. Overtime is hard so the fact that we could get it in and not have to play the whole fifteen was nice,” Mosky said.

The first half was a defensive battle, as scoring opportunities were few and far between with much of the game being played in the middle of the field. However, at the 10-minute mark, Maine redshirt third-year goalie Emma Cochran came up with a huge save on a breakaway attempt by the Catamounts. It was Cochran’s only save of the game, as she was substituted at halftime for redshirt third-year teammate Emily Corbett, a move Maine coach Josette Babineau has made consistently throughout the year.

With the lack of scoring in the first half, it would be plausible to think that one goal could win the game. But that proved to be far from the truth in a back and forth second frame. Second-year midfielder Casey Crowley received a crisp pass from fourth-year midfielder Sydney Veljacic, got an open look on the right side of the circle and rocketed one home for the 1-0 lead, 10:17 into the half.

After Vermont’s Greer Wilson countered only two minutes later to tie the game, it was two minutes after that, with 20:35 left to play, when Veljacic fed Crowley again. This time Crowley spun on the edge of the circle and beat the goalie with a hard backhand shot for a 2-1 lead. Her two goals were her eighth and ninth of the season. Veljacic improved her assist tally to six on the year.

But Vermont again refused to quit. After Babineau called a timeout with four minutes remaining to prepare for a late game push by the Catamounts, Vermont’s Landon Warren was able to beat Corbett one-on-one to tie it up with only 1:18 left in the game.

“After the game we did talk about how we need to learn how to close out the last couple minutes. We were pretty deep in our end, not great field position, but did a good job to get it out of there,” Babineau said.

It being the Black Bears’ third overtime game of the season, they were no stranger to extra time. The team came out of the huddle poised and patient. And it didn’t take long for them to seal the victory. At 73:29, Mosky received the ball from fourth-year forward Danielle Aviani and flipped it over Vermont goalie Lena Benwood for the win.

“Ella plays in the backfield for us so she doesn’t get as many opportunities maybe inside the scoring circle. But she’s got the skills to be able to do that so it’s nice to see her have the opportunity to do it and to put it away,” Babineau said.

“It’ll be good to see some west coast competition,” Mosky said. “We hope to come out with a win.”

Coming away with two 3-2 overtime victories in a row and making it eight straight seasons with double-digit wins, Maine faced off in a matchup between Bears on both sides. The Black Bears would unfortunately fall to the Golden Bears, 3-2. Maine dropped to 10-5 and California improved to 4-8.

Maine opened the scoring early at 6:15 as Aviani scored for the 1-0 lead. This was Aviani’s sixth goal on the season.

“Capitalizing on an early opportunity gave us some momentum, but California played us to our strengths and limited our chances,” Aviani said.

About six minutes later, the University of California answered, as third-year forward Emily Catan scored to knot it up at 1, assisted by fourth-year forward Nicole Henriksson. This was Catan’s first goal on the season.

“It felt great to score my first of the season against such a good team. From that point we didn’t surrender any more goals, so I definitely feel like I made an impact today,” Catan said.

Neither offense could muster any more scoring in the half and the defenses stood their ground until halftime, not allowing many chances.

Maine finished the first frame with four shots and one on goal, while California had nine shots and three on goal.

Corbett started for the Black Bears, while third-year back Mara Gutierrez started in goal for the Golden Bears in an interesting scenario for California. Gutierrez was replacing third-year goalie Kori Griswold, who suffered a concussion yesterday. Their backup goalie, first-year Danielle Mentink, was hurt as well and couldn’t play. Gutierrez didn’t suit up in goalie gear, but instead wore a green pinnie.

“I haven’t played goalie that much and it was a completely different experience trying to do my best playing that and my normal defensive position. I didn’t mind that Coach Onstead switched it up, as it took some pressure off me,” Gutierrez said.

At 24:28 of the first half, Maine took a timeout. California made a replacement at goalie, as fourth-year back Lexi Collins put on Griswold’s gear and played as the emergency goalie. Collins didn’t have to make any saves in the first half and Corbett made two for Maine.

“We were planning for Gutierrez to remain in the pennie for the entire game, but after Maine used their timeout, we thought about it again and chose to have Collins suit up. Not much to our surprise, it worked out well,” California Head Coach Shellie Onstead said.

The move that Babineau has made herself known for, switching her goalies in between halves, occurred when Cochran entered the game at the beginning of the second frame.

“It was a close game and that didn’t factor into my decision. Seems that California wasn’t exactly prepared with their goalie situation and that might have played some tricks on us,” Babineau said.

At 49:58, the Golden Bears were the first to strike in the second half, as redshirt second-year back Katrina Carter scored to give her team a slim 2-1 lead. This was Carter’s third goal on the season.

About 12 and a half minutes later at 62:32, California added to their lead as second-year back Keats Iwanaga scored on a penalty stroke goal to make it 3-1. This was Iwanaga’s second goal on the season.

The Black Bears would not be able to create a comeback in the last minutes of the contest, failing to capitalize against a team that didn’t feature a true goalie. They finished with four shots on goal, while California had two shots on goal. Collins made four saves in the half.