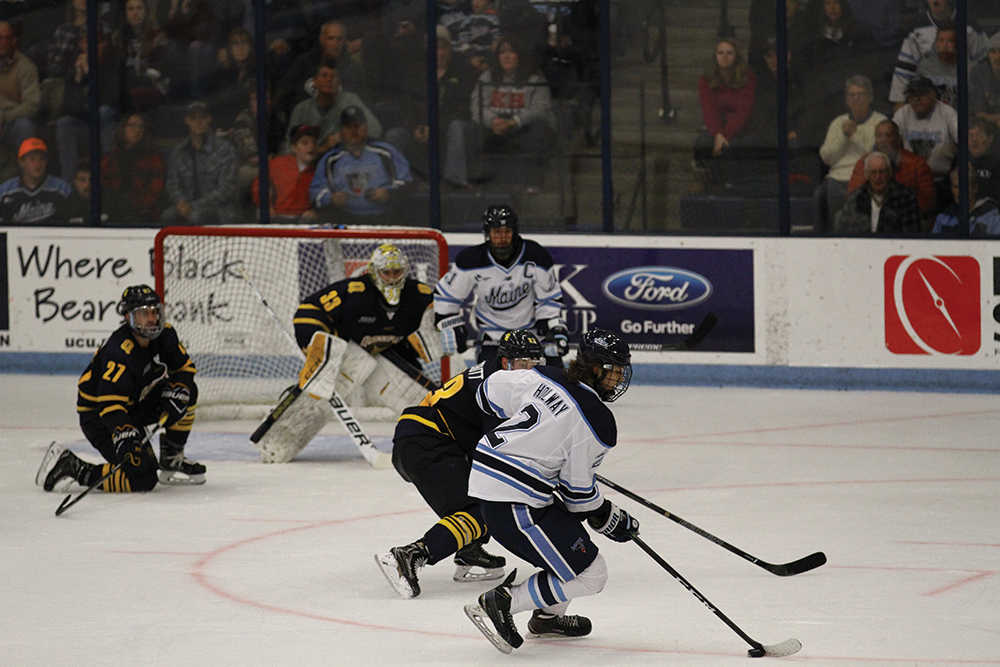 In 40 minutes of play, the University of Maine Black Bears hockey team (3-0-0) couldn’t buy themselves a goal. They fumbled on a breakaway, a pair of 2-on-1 opportunities and a plethora of man advantages.

In the final 22 minutes of action, however, the Black Bears offense couldn’t be stopped — due in large part to Quinnipiac’s undisciplined play, which resulted in five Maine power plays over that span. Maine notched a trio of third period goals to force overtime, where first-year forward Mitchell Fossier would score the game-winning goal, his fifth of the season, leading Maine over No. 3 Quinnipiac University Bobcats (1-1-1) by a score of 4-3.

“He’s a 200-foot hockey player. He knows what’s going on defensively as well as having a feel for the game offensively,” Black Bears Head Coach Red Gendron said of Fossier after the contest.

“Twelve powerplays…that’s ridiculous. You keep giving them power plays like that, it’s just a matter of time [until they score],” Pecknold said. “We were tired. I can’t remember the last time we had to kill off twelve penalties, like I can’t even fathom that it just happened.”

On a power play that resulted from a Quinnipiac tripping violation in overtime, fourth-year defender Eric Schurhamer sent a pass across the slot that found Fossier, a left-handed shooter, open at the left faceoff dot. Fossier flung a wrist shot that beat Quinnipiac third-year netminder Chris Truehl over the shoulder. The puck deflected hard off the left post and fell to the ice, rolling into the back of the net to secure Maine’s upset victory over the heavily favored Bobcats.

“There was some traffic up at the point. Schurhamer got it and found the seam to me and I just tried to get it off quickly. I think it caught the post and his back, it was a fortunate play,” Fossier said.

After Quinnipiac exploded for two goals in less than 90 seconds midway through the middle period, the Black Bears found themselves on their heels heading into the final stanza.

“I give Maine a lot of credit. They battled hard, they played hard. We were good in spurts. We played with a little bit of panic. I thought uncharacteristically, our buy in was poor,” Pecknold said.

Schurhamer facilitated a goal to third-year forward Nolan Vesey to cut Quinnipiac’s lead in half at the outset of the period and Bobcats third-year center Tanner MacMaster responded with an even strength goal six minutes later to reinstate his team’s two-goal advantage.

Schurhamer helped Maine regain momentum by converting a 2-on-1 opportunity with first-year forward Patrick Shea, beating Truehl with a backhand-to-forehand deke on his glove side to clip the Quinnipiac lead to just one goal.

Shea evened the score at 3-3 on a miraculous falling goal that trickled into the back of the net, assisted by Schurhamer. Shea received a drop pass from Schurhamer while he and other linemates made a change and Shea entered enemy territory of his own accord.

Shea deked around two defenders at the blue line and cut past two more as he slipped into the slot, firing a wrist shot that deflected off the shoulder of Truehl and back into play. Alone in the offensive zone with all five Bobcat defenders closing in, Shea followed his initial shot and attempted at the rebounding puck but was slashed hard, falling to the ice and thrusting his stick forward with both hands.

After losing sight of the puck on the initial shot, Truehl panicked himself into a full split and fell to his back, sprawling across the goalmouth in an attempt to stop the puck that had somehow made contact with Shea’s stick as he fell to the ice. Shea’s unpredictable connection sluggishly crawled by Truehl, who was roughly a puck’s length away from making the save, dribbling across the goal line before it could be trapped by his glove.

“I whacked at it,” Shea said. “I followed it up and somehow it ended up in the net.”

“Bad break on the Shea goal,” Pecknold said. “That thing goes in at like one mile an hour.”

Maine failed to score on the ensuing power play, but Shea’s goal was good enough to force overtime, where Fossier would steal the show.

Quinnipiac owned the first two periods of play and took control of the contest in the middle period, capitalizing on back-to-back Maine penalties that led to a 5-on-3 opportunity for the Bobcats, which they soon converted into 2-0 lead. Both goals were scored on the power play.

The first goal in the period came during 5-on-3 play from third-year wing Andrew Taverner. Taverner posted himself in the right faceoff circle and waited for a pass from second-year defender Chase Priskie, ready to strike with his stick in the air. When Priskie delivered* the pass, Taverner sent a slap shot that beat Black Bears second-year goaltender Rob McGovern on his glove side, with three seconds remaining in the first power play.

Taverner and Priskie teamed up to help second-year wing Thomas Aldworth notch Quinnipiac’s second power play goal of the contest, which came on the back end of the original 5-on-3.

Running the same play that tallied the first goal, Aldworth became the benefactor when Taverner sent the puck bulleting across the slot to the opposite circle, passing up on the same scoring opportunity that had connected for a goal just moments before. This time it was Aldworth who managed to one-time a slap shot into the net on Maine’s poorly positioned defense, giving the Bobcats a 2-0 advantage.

“It was no magic elixir from any individual player or a coach. These kids, the ones who were here before are battle tested, they’ve been through a lot. They went through a very difficult year last year but they never quit, they kept battling. And now, it seems like we have a little more depth offensively, at least through three games and we’ve scored some goals,” Gendron said.

Maine outshot Quinnipiac in the contest 30-28. McGovern, who stopped 25 shots, earned the win and moves to 3-0 in net for Maine on the season. Truehl falls to 1-1-1 in net for Quinnipiac and stopped 26 shots on the night.

“We really rallied behind each other,” Schurhamer said. “We seem to find a way to win. We love it, that’s great, we just want to keep that going.”

The UMaine men’s ice hockey team came up short in completing their weekend sweep against the Bobcats as they fell 3-2 in overtime on Saturday night at the Alfond Arena.

Heading into the third period it was 2-1 with the Bobcats on top. It was full of fast paced, physical hockey with lots of action. Both goalies stood tall in between the pipes with 15 consecutive saves between the two. Neither team could break the ice until 15 minutes into the third period, when Vesey answered the call and tied the game up for the Black Bears at 2-2. Vesey’s game-tying goal was assisted by first-year linemates Patrick Holway and Fossier. This sent the game into overtime for the second night in a row.

Quinnipiac came out in the overtime flying and overwhelmed the Black Bears before their very own eyes. They were controlling the puck and skating around Maine before they fired one on net that was saved by McGovern right to second-year forward Craig Martin who banged in the rebound to finish off the game in winning fashion for the Bobcats.

McGovern was extremely solid all night long for Maine and kept them in the contest. He may be the single reason that the game went into overtime, but he still wasn’t content with his outing.

“I may have made a lot of saves, but we didn’t get the win so I could have been better. If we don’t get the win then, I don’t consider it a successful performance,” McGovern said.

Maine racked up 16 penalty minutes throughout the course of the contest and it ended up costing them as they were playing man-down a lot of the night, thus forcing them to have to chase around the Bobcats speedsters all game. Head Coach Red Gendron wasn’t pleased with the penalties his team took on Saturday night and felt it cost them a chance to keep their undefeated record alive. However, he is certain they don’t lack talent this year.

The Black Bears hit the road to visit Miami University of Ohio next weekend for a weekend series that will be played on Oct. 21 and 22. Quinnipiac will next play University of Connecticut in Hamden, Conn. on Wed. Oct. 19 with a puck drop scheduled for 7 p.m.