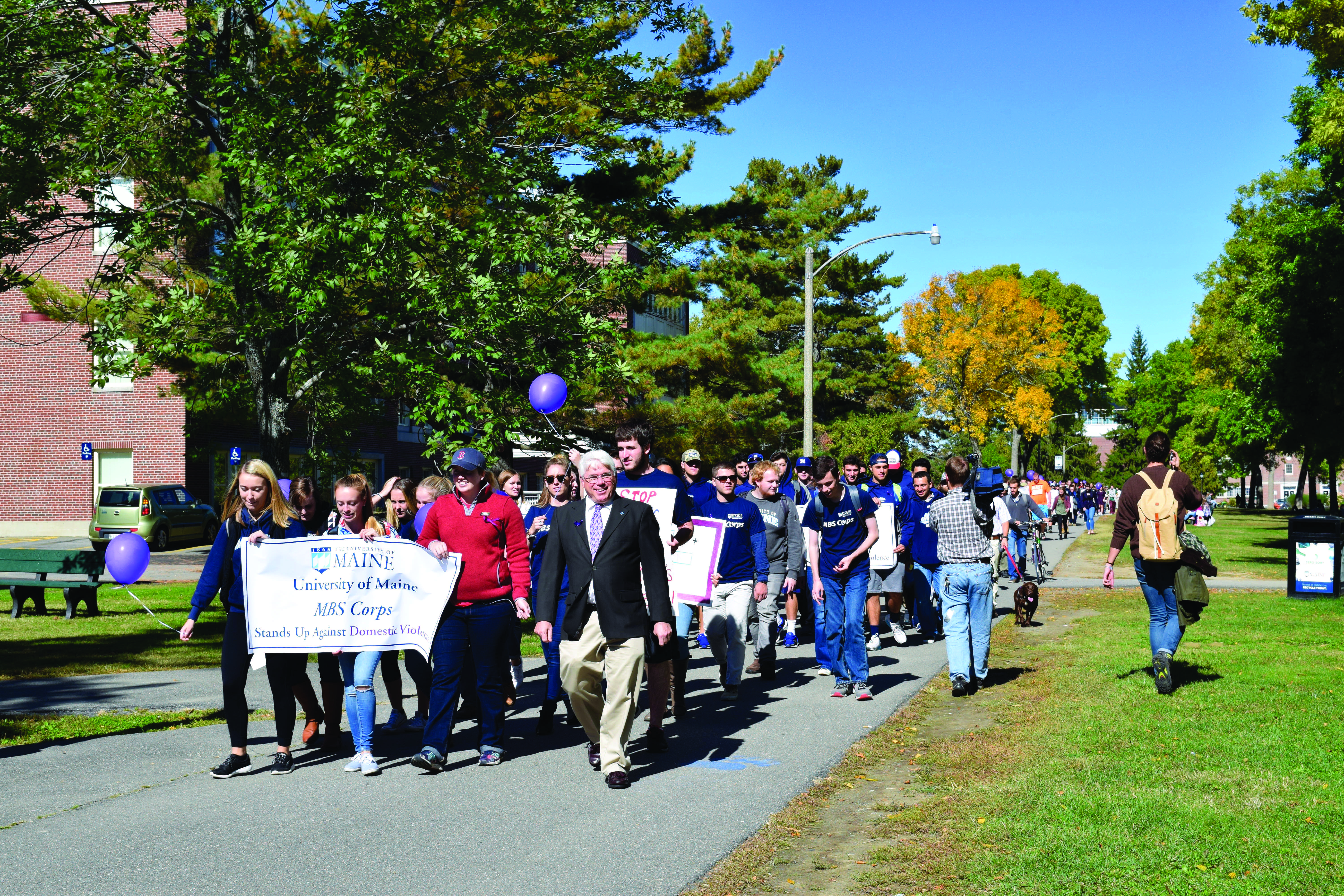 On Wednesday, Oct. 5 the Maine Business School Corps (MBS Corps) held its third annual March Against Domestic Violence. Hundreds of students, faculty and community members walked around the University Mall to honor the victims and spread awareness about domestic violence.

MBS Corps had been planning for this event since the academic year started. They created signs that asked, “what does love, respect, and kindness look like?” that were hung in Donald P. Corbett Hall. Passers-by wrote what these words represent to them. At the march, these signs were laid out in front of Fogler Library for people to read.

“They [the signs] show that people are there for people who go through struggles like this,” Bobby Begin, the treasurer of the MBS Corps, said. “Domestic violence has been a growing issue in this country. If we can bring all the students together to show that we want to bring awareness to this, I think that goes bounds beyonds anything else we can do,” Begin said.

The march started at noon, with more than 200 people walking around the mall. Several passers-by stopped to see what the march was about. Some of them joined the walk. After participants gathered in front of Fogler Library, Dean of Students Dr. Robert Dana took to the steps to speak and hold a moment of silence for the victims of domestic violence.

“We as a society, have got to stand up and say no more,” Dana said during his speech.

According to the National Coalition Against Domestic Violence (NCADV), on average, nearly 20 people per minute are physically abused by an intimate partner in the United States. On a regular day, there are more than 20,000 phone calls placed to domestic violence hotlines nationwide. Within their lifetime, one in three women and one in four men have been victims of some form of physical violence by an intimate partner.

Representatives of the University of Maine’s Male Athletes Against Violence (MAAV) shared a pledge against violence with the audience. Michael Fagan, member of MBS Corps, read a poem by Scott Williams titled “Come Hell or High Water.”

“She looks out the window and sees him in the distance. So much fear inside leaves no room for resistance,” Fagan read.

“It’s amazing that so many young people across the nation are doing their part to raise awareness, and this march is just another example of that,” Amanda Cost, representative of Spruce Run, said. “Love should not hurt,” was the message Cost emphasized during her speech.

On June 13, 2011, Steven Lake of Harmony, Maine, killed his estranged wife Amy Lake and their two children Coty and Monica before committing suicide. Jim Huff, friend of the late Amy Lake, spoke at the March Against Domestic Violence.

“Just because we are with someone, does not mean we own them,” Huff said. “We’re partners, not domineers.”

During his speech, Huff was visibly emotional. Huff had some reservations about speaking at the march. Before coming to UMaine, he called Amy Lake’s father and asked for permission to speak about his daughter.