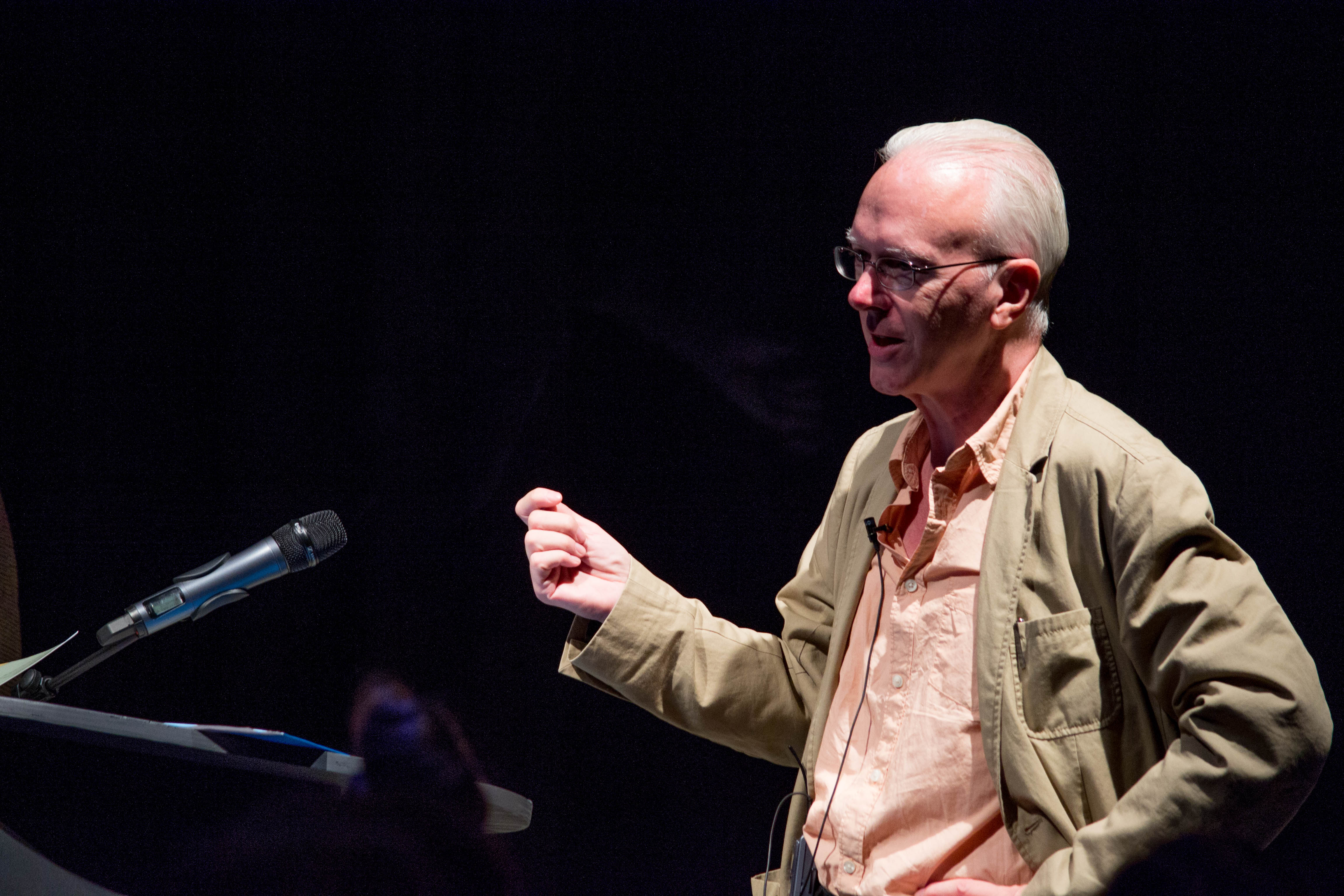 Reading fast and with purpose, Trevor Joyce snapped his fingers as he wove words into powerful poems. The audience laughter was raucous as his humor weaved itself into clever, contradicting lines. During the opening statements, it was mentioned that Joyce was an interpreter of words. After his performance for the New Writing Series, it is hard to disagree with the sentiment.

With yellow and blue lights dotting in the Stewart Commons Black Box, the audience fell into Joyce’s world. Inspired by phrases by Li Ho and Fanny Howe, Joyce explains, “An artist steals,” however his own poetry has it’s own merits and ideas. “Sweeny” was an original piece that took a decade to write, originally in the classic Irish structure of verse and prose and verse again. The piece was made completely in English monosyllables. Other pieces, such as “Stonemaker,” “Capital Counts,” and “Course of Nature,” were equally engaging, fiddling with fierceness, contradiction and gaps as if these techniques were a part of his soul. Perhaps they already were.

“I’m very distrustful of language…particularly…the perfectly [sic] language which is now used to sell cars…I prefer to put a number of things in the linguistic space…when it seems one is coming to say something, something interrupts and leaves it to the wind,” Joyce said. “How does one give it a form?”

The audience listened intently. One person in the audience asked Joyce about his work, saying that it “Avoids the personal, but there’s a part that’s intensely personal.” Joyce agreed, but mentioned his conflicts with language once again. “There’s a danger to Hallmark language,” he said.

Joyce is Irish, born in Dublin, and co-founded the New Writing Press. For a time, he even worked with Apple Inc. Still, Joyce still faced his fair share of criticisms in the beginning of his career; his first big punch coming from the hands of a famous literary critic. After slamming him for his numerous use of imagery surrounding dying birds, Joyce embraced his literary imagery, explaining in the New Writing Series that it was metaphor for the human voice. “I trust the sounds of a bird more than the human voice,” he said.

As Joyce continued to enumerate the dangers of language, feelings and skepticism, audience members drew only closer to his poetry. “[Joyce’s poetry] displaces itself and carves a space,” Sarah Barnard, a former graduate student, said. Barnard, despite completing her degree, continues to come to the New Writing Series readings.

“I like how anti-authoritarian he is,” fifth-year English student Morghen Tidd mentioned.

Fifth-year English student Katherine Dubois agreed. “He subverts his own language. He’s tearing apart his own language,” Dubois said. She also suggested that Joyce’s work was reminiscent of the myth of Ouroboros, a snake which constantly creates and destroys itself.

Joyce added that he doesn’t like teaching creative writing classes. The few times he taught students, he taught them that there was no such thing as “in your own words,” referring to language as “disgusting” and instead imploring new artists to focus on form and style. When writing your own pieces, it must be different and honest. Joyce seems to suggest honesty can often be telling multiple angles of the same story, rather than hearing the full explanation from just one person.

“I work in the schools in Bangor and it’s nice to see something different,” Kathy Rice, a contracted photographer, said. The audience seemed to agree, lingering over 30 minutes after the event to talk with Joyce and others.