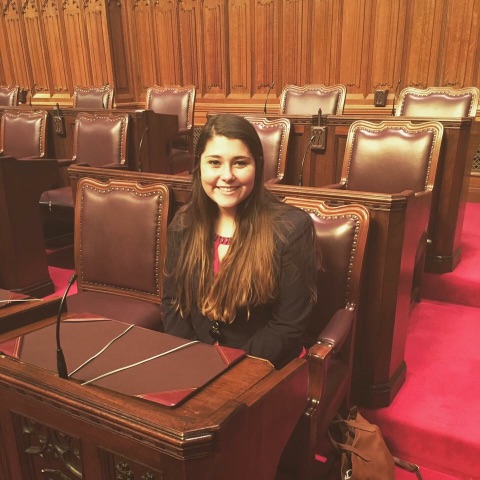 For five weeks this past summer, Miranda Roberts stepped out of her comfort zone and over international borders when she moved to Ottawa to participate in the Canadian Parliamentary Internship program. The third-year political science student spent those five weeks helping write policy, doing research for her assigned parliamentarian, reaching out to constituents and numerous other important tasks.

“I was essentially another staffer, but I was also an intern,” Roberts said.

Roberts, who had already been closely aligned with the Canadian-American Center, heard about the internship while inquiring for other programs. With only a month to complete the application and meet the deadlines, Roberts was able to make it happen, and was accepted as an intern.

Roberts was assigned to work closely with a member of the Parliament of Canada, where she was immersed in international politics. One of the most important bills that Roberts had the chance to work on was a bill regarding euthanasia. “The bill was proposed to allow people throughout Canada to choose to end their life if they wished,” Roberts said. With such a morally and emotionally charged topic, the bill was rejected by the senate multiple times and returned to the house for ramifications before finally being approved by the Senate and made into a law.

While the euthanasia bill was Roberts’ primary focus while working with her member of the Canadian Parliament, the team also focused on a private member’s bill, which is a bill proposed by a legislator who is not doing it on the behalf of an executive branch. This bill in particular was intended to lower distillery tax and make it less expensive for distilleries to produce alcohol. “We watched the voting a couple of weeks ago from the U.S.,” Roberts said of the bill that was eventually approved.

“The goal of my internship was for me to get hands-on political experience in an international setting,” Roberts said. Roberts, who has a minor in Spanish, was initially searching for an internship with the sole purpose of going abroad. With Canadian lineage on both sides of her family, Roberts was drawn to Canada by its proximity to Maine and safe atmosphere.

By going abroad, Roberts was able to gauge a difference between American and Canadian politics. “There isn’t a lot of gridlock in Canadian Parliament,” Roberts said. Once bills are proposed, they are discussed and can sometimes take only a matter of days for them to be passed through the senate to become a law. In comparison to the political atmosphere in the U.S., this is unusual.

Roberts says that her time serving the Canadian Parliament showed her that while there are many similarities in the relevant issues facing the two countries, “a lot of the social issues we are battling in the U.S. [Canadians] have already dealt with.” The more relevant issues facing Canada primarily involved economics, “a lot of the groups want to lower taxes, but not so much social issues.” Roberts said the euthanasia bill was the most controversial issue she had seen.

In the future, Roberts hopes to get involved in Maine politics or state politics because “I think it has a larger impact on people’s lives,” Roberts said.