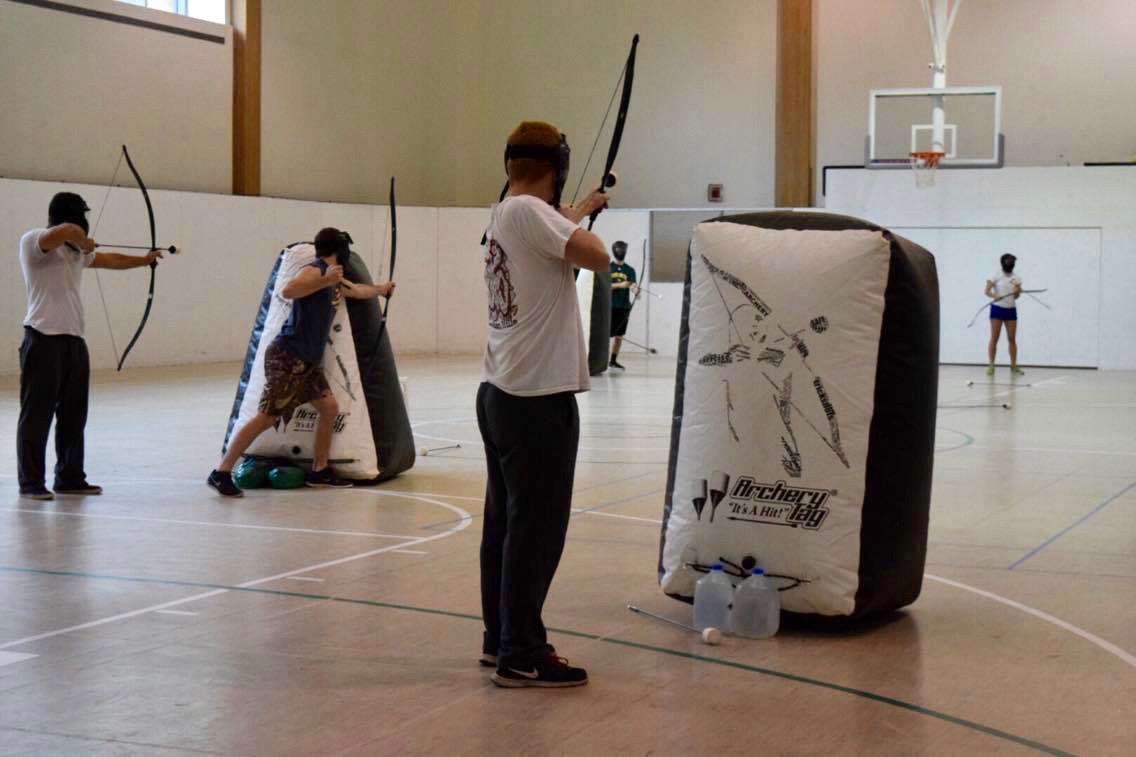 Last Saturday, Oct. 29, the University of Maine chapter of Sigma Phi Epsilon (Sig-Ep) held its second annual Archery Tag tournament. Archery Tag is played using bows and arrows with foam on the end to tag out opponents in a manner similar to dart tag, paintball or tag-ball.

This fast-growing sport was created in 2011 by the founder of Instinct Archery, John Jackson. Jackson was quick to acquire a patent for the sport before the first “The Hunger Games” movie hit the theaters in March 2012. Based in Waterloo, Ind., Jackson staged Archery Tag events at local premieres of the film series.

Instinct Archery is a company that produces archery equipment and looks to “inspire those who have forgotten, and those who have yet to discover the pure enjoyment of traditional archery,” according to the company’s Facebook page.

Eight teams of five players signed up to play the game free of charge at the New Balance Student Recreation Center last Saturday. Donations were welcomed, with all proceeds going toward the local Big Brothers Big Sisters organization. The goal of this nationwide nonprofit organization is to help children reach their potential through supportive one-to-one relationships with volunteer mentors. Several Sig-Ep brothers are mentors to middle school students in Orono and Old Town.

Brothers of Sig-Ep came up with the idea of hosting Archery Tag last year at a meeting.

“We were trying to figure out something fun that we could do with everybody, and someone brought the idea of Archery Tag and we looked into it,” Sig-Ep brother Jared Gartley said.

“Judging by the success we had last year, we decided it would be a good idea to do it again.”

The fraternity held their first Archery Tag tournament this past spring on the Sig-Ep lawn.

“It is a combination of paintball archery and dodgeball,” Sig-Ep brother Chris Giroux said. “That’s the best way to describe Archery Tag.”

The game’s rules are similar to those of dodgeball. At the whistle, two teams race to collect arrows at the center of the arena. A player is disqualified when hit by an arrow, which for safety reasons, has a foam tip that resembles a marshmallow. A player can bring an ousted teammate back into play if he or she catches an arrow. The team with the most number of remaining players wins. An alternative way to win the game is to knock out the five discs of the opposing team’s target.

Giroux participated in the first Archery Tag hosted by Sig-Ep in spring.

“At first, I was nervous and didn’t really know what to expect. While the bows are pretty powerful it doesn’t actually hurt at all. It was a lot of fun and we had a great time, even though my team lost,” Giroux said.

Players were encouraged to show up in Halloween costumes for the Archery Tag and teams with the best costumes received a prize. A team comprised of Star Wars stormtroopers led by Darth Vader stood out while shooting arrows.

For Michael Tarquinio, a sophomore at UMaine, it was his first time experiencing Archery Tag.

“I really like archery and I always wanted to get into it. I also like dodgeball, so I thought why not put two together,” Tarquinio said.

Tarquinio signed up for this game with his friends and thought that playing Archery Tag was a good bonding experience. He shared that it was pretty easy for him to learn how to use the bow and arrow. “It’s really hard to not get hit because there’s five people shooting at you at all times,” Tarquinio said.

Archery Tag has 170 licensed locations, mostly in the United States, but also in Russia, Peru and Saudi Arabia. Founder of the sport John Jackson hopes to see Archery Tag become a mainstream sanctioned global sport at the collegiate, professional and Olympic levels.

District 5 Senate race poses one of the toughest choices for voters in all of Maine
Powerful Duo: Pattie McCarthy and Jenn McCreary read for New Writing Series