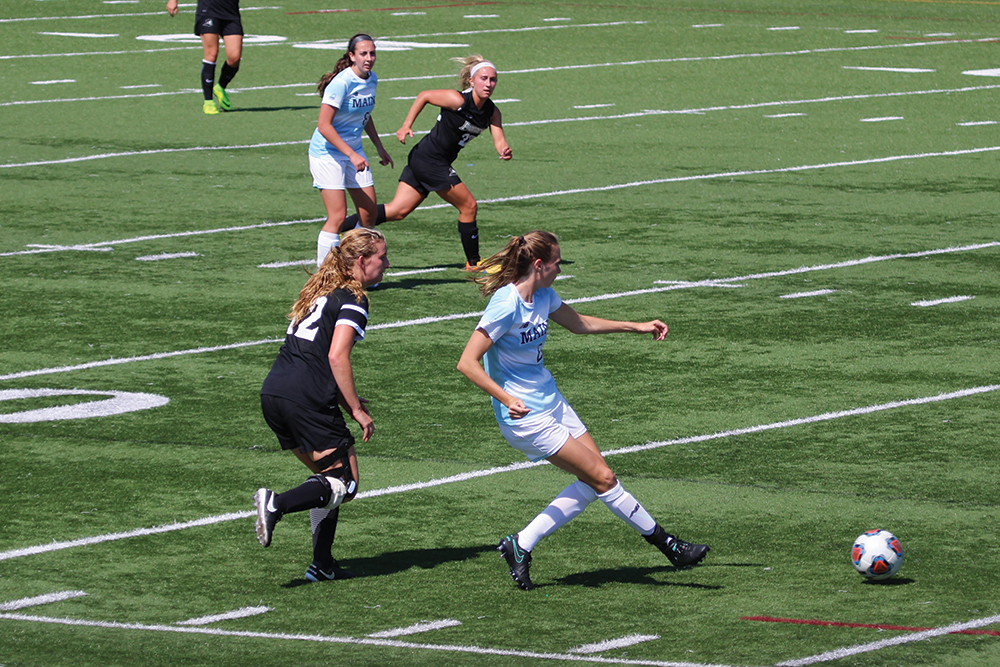 Maine’s hopes of breaking a three-game losing streak were dashed as Stony Brook’s second-year defender Allyson Baner scored at the nine-minute mark in the game on Thursday, Oct. 13. The goal proved to be the only goal the Seawolves needed in their 2-0 shutout win versus the Black Bears. With the loss, Maine moves down to 6-7-0 this season, 2-4-0 in conference play. The win improves Stony Brook to 7-7-2 for the year, 4-1-0 in America East.

The first goal of the game started with a corner kick from Stony Brook’s fourth-year defender Hannah Groth. Groth’s well-placed lob found Baner in the box and Baner knocked the ball past second-year goalkeeper Samantha Cobotic with her head. The goal was Groth’s first in her career. Her only other career point came from an assist on a goal last season versus Farleigh Dickinson.

It was almost 80 minutes later when the score changed again. In the 87th minute, fourth-year midfielder Amy Thompson received a long pass from fourth-year defender Priscilla Wiggins. The pass made it through a cluttered defensive zone and Thompson capitalized on the opportunity, making it past Cobotic to give the game its final score of 2-0. The goal was Thompson’s fifth of the season. Thompson is Stony Brook’s second most potent goal scorer behind only fourth-year forward Raven Edwards, with six goals. This is impressive considering Thompson’s 455 minutes played this season is a little over a third of Edwards’ 1,241.

Throughout the game, Maine only generated two shots on goal. Thompson earned the game’s high for shots on goal, personally accounting for two of Stony Brook’s five shots on net. Second-year forward Vivien Beil recorded Maine’s shot high with three, only one of them landing on target.

Cobotic added three saves to her 28 total save performance this season. Adding in her performance against Stony Brook, Cobotic’s save percentage this season averages out to .757. Along with first-year goalkeeper Annalena Kriebisch’s, who has been sitting out due to an injury, Cobotic’s performance in the net has landed Maine at the top of America East for goals allowed with an impressive 13. Maine is in third place for goals allowed average (1.08) behind the University of Hartford (1.05) and the University of Vermont (1.01). Despite Maine’s above average defensive and goalkeeping abilities, they have only managed to score one goal in the past four games. Maine is at the very bottom of America East for shots and in seventh out of nine for goals scored.

Headed into the final stretch of the season, Maine finds themselves in fourth place in America East standings. They will look to improve their situation and snap their current losing streak with two more conference games remaining in the season. It will be difficult versus the University of New Hampshire (UNH) and their high-powered offense. UNH is the only team to have beaten Hartford this season and it looks like the two schools will be the teams to beat come playoffs.

Beil’s overtime goal versus UNH snapped a four-game losing streak and brought much needed confidence to a team heading into a sudden death post season.

Ninety minutes were not enough to decide Sunday’s game versus the Wildcats. Per NCAA rules, teams play two 10-minute golden goal halves to decide the winner. If no goal is scored, the game ends in a tie, unless it is playoffs where the game would move into penalty kicks. Not a single goal was scored by either team for 117 minutes, until a Maine defensive clear found Beil at half-field. Beil was immediately surrounded by UNH defenders, but a clever drop-pass to first-year midfielder Kaitlyn Ball created an offensive fast break. Ball brought the play down to the 18-yard line where she stopped and chipped the ball back to Beil. Beil wound up and shot hard and low to the ground. Her effort made it past fourth-year goalkeeper Mimi Borkan and cruised into the back right corner of the UNH net.

“I just didn’t have pressure so I just went for the shot,” Beil said.

The goal was Beil’s second of the season, the first coming way back in August when Maine played Central Connecticut State University. Beil has started in every game this season and has played nearly every single minute. She is second in points behind Ball and second in shots behind second-year Anetra Byfield. Beil only had one shot all game. Second-year back Mikayla Morin topped all other shooters with five shots. Seven total Maine players recorded a shot during the game’s 117 minutes of action versus UNH.

On the other end of the field was Cobotic who, after this game, has played just as much as Kriebisch has this season. The pair have both played seven games. Cobotic has saved 36 shots on net, allowed nine goals and posted a .800 save percentage. Kriebisch on the other hand has saved 34 shots, allowed five goals and recorded a .872 save percentage. Kriebisch has the edge in wins with four, compared to Cobotic’s three. Maine’s strongest suit is their defense which is anchored by their goaltenders and supported by this shutout win.

After two full periods the score was tied 0-0. There were many nail-biting chances on both sides of the field. UNH’s third-year forward Brooke Murphy took control for the Wildcats. A botched defensive play led to a point-blank shot by Murphy in the 98th minute. The shot went wide past a diving Cobotic. Murphy would get several more attempts off of corner kicks and parameter shots, but could not figure out UMaine’s defense.

“We were strong, we were getting after it,” Murphy said. “We didn’t play bad, we just were missing that final ball that’s connecting to the goal.”

UNH looks to Murphy in those tough overtime situations. She leads the team with nine goals. That number is enough to put her at the top of America East for goals, goals per game and points. She is second in the league for shots and shots per game.

UNH Head Coach Steve Welham was happy with his team’s effort but disappointed with the outcome.

“It is always going to be a battle,” Welham said. “It is always an overtime game, it seems like. We did OK, we had some dangerous chances but we didn’t finish.”

UNH was coming off a tough overtime loss versus the University of Albany. The loss set the stage for the match versus Maine, a team that has struggled to remain in the game for the full 90 minutes.

“We’re a young team and part of the process is you have got to get through your challenging moments and this represents that kind of will we are looking for,” Maine’s Head Coach Scott Atherley said. “For us to be able to play a full 110 minutes like that, that’s what you’re after.”