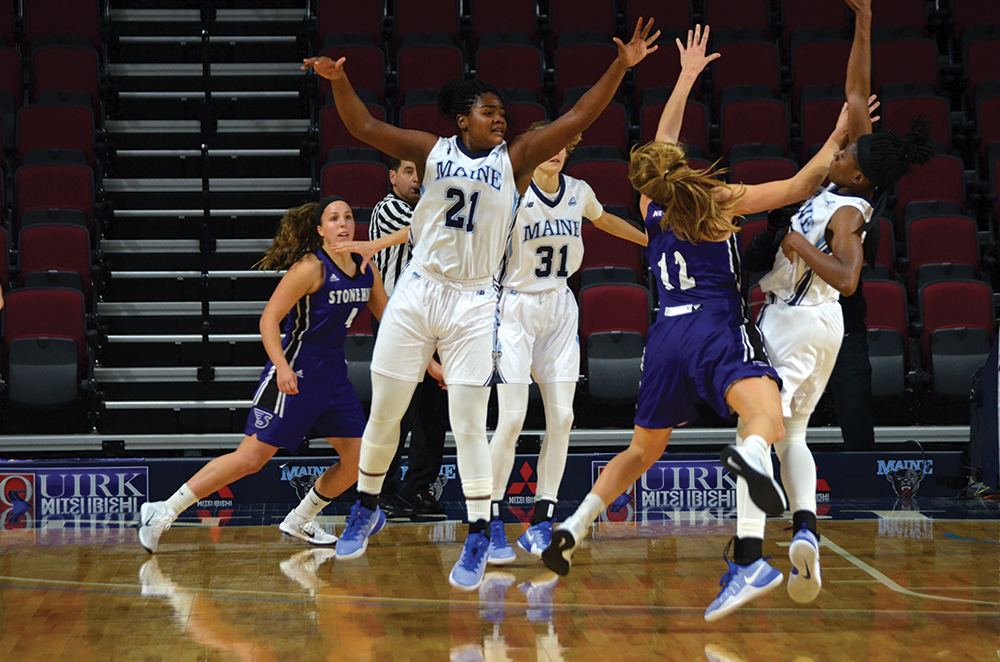 First-year forward Laia Sole led the University of Maine Women’s Basketball team to a 74-54 victory over the Stonehill College Skyhawks on Sunday, in the team’s first exhibition game of the season. Sole had 21 points and was 10 of 13 from the field.

“I just wanted to play and I was very excited,” Sole said, after being named player of the game. “My teammates are very good so it’s very easy to play with them.”

The game was closer than the score indicated, especially in the first half. Stonehill was able to force turnovers with aggressive defense and turn them into easy layups on fast breaks. Fourth-year Skyhawks guard Kelly Martin set the tone early, knocking down back-to-back three-pointers on Stonehill’s first two possessions to take an early 6-0 lead.

“She makes us go,” Stonehill Head Coach Trisha Brown said in reference to Martin. “She does everything for us offensively and defensively. She’s just such a great scorer and she scores early. We’ve got to bring a couple more [players] up to her level and I’ll feel really good about where we’re headed.”

Martin finished the game with 25 points and four assists.

The Black Bears never let the first half deficit get to more than seven but also never lead until the final play of the half, when fourth-year guard Sigi Koizar nailed a triple as time expired to send Maine into the locker room with a 33-30 lead. Koizar, a veteran guard for the Black Bears, finished with eight points, seven rebounds and four assists.

As the second half began, it was clear Maine had made some adjustments. The two teams went back and forth for part of the third period, but Maine began to pull away as the half went on.

It was the fourth quarter when Sole went to work, scoring the Black Bears’ first 15 points in the quarter. Sole, a player to watch this season as a possible America East Rookie of the Year, displayed an array of post-moves throughout that stretch, hitting right-handed layups, left-handed layups and baseline jumpers. She even brought the Black Bear fans to their feet with a dazzling no-look pass to third-year guard Tanesha Sutton to put Maine up 67-54 with 2:52 to play.

At the end of the day, Stonehill simply had no answer for the first-year forward from Spain.

“She was just shaping us up and making strong moves,” Brown said. “We didn’t make good adjustments on her, for sure.”

Barron was very complimentary of the Skyhawks after the game, indicating that there’s a reason Maine has scheduled a preseason game against them for the past two years.

“They’re a very well coached team. They have a really good competitive spirit about their team and that’s great for us,” Barron said. “They jumped on us early, they were great with what they were running, they were running it with precision, their timing was excellent. And defensively I thought they were very aggressive as well.”

Maine must now, however, prepare for the likes of Syracuse, who they will face in a closed scrimmage and Purdue, who they face in their home opener on Nov. 11.

Maine has 10 new players on this year’s team, nine of which are freshman. The one non-freshman, second-year guard Tanesha Sutton, started for the Black Bears and had 10 points, four rebounds and three assists. Sutton transferred from Duquesne University, where she played two seasons ago, having to sit out last season due to NCAA transfer rules.

“My teammates and coaches gave me that boost to go out and try and do what I can do,” Sutton said. “I felt more comfortable as the game went on.”

Barron realizes that with so many new faces, it will take some time for the team to come together. But he likes the direction they’re going in.

“It’s just such a long journey. To think about starting the season and are we ready? No. Heck, no. We’re not even close. But I don’t know many teams that have 10 new players that would be. So that’s just the way it is. We hope that this season is one where we see continued improvement with so many new players. I don’t see how we can’t, as long as we keep our morale up.”