Figure Skating club opens doors to skaters of all levels 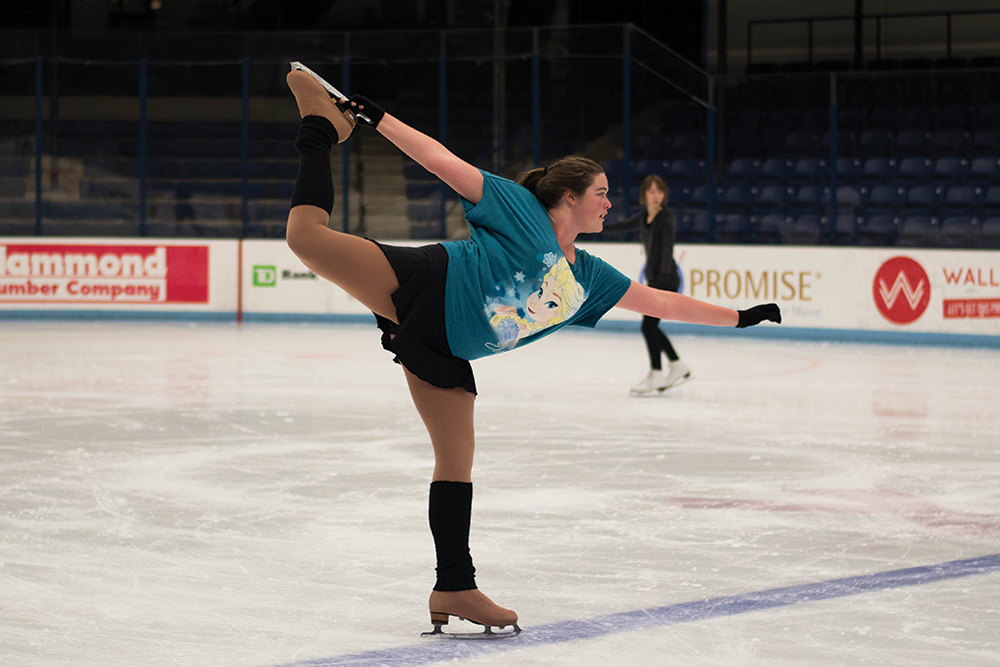 The club president, fifth-year Elizabeth (Beth) Nelson came into the club with some experience skating, but not as much as other members.

“My younger brother and sister had been skating three years prior to me starting. I was a freshman in highschool and I had looked at my sister’s coach who also happened to be in high school and I had said ‘they are just twirl girls and she said I bet you can’t make a season on the ice,’” Nelson said.

She skated for four years before taking a couple off prior to joining the figure skating club. When she joined the club, they had only four members and six members the next year. The team has grown significantly since then and she contributes it to their positive attitude and the work they have done to promote the club.

“We’ve just been very positive and we do a lot of club interactions with the school community, a lot of word of mouth, flyers,” Nelson said.

First-year student Alexia Hilt came to the University of Maine specifically because of the figure skating club, having done ice dance for years before. Ice dance is a type of partner skating with less spins and twists than traditional figure skating.

“It was one of the few colleges in Maine that had a rink and an ice skating club,” Hilt said.

While many of the members have experience similar to Hilt and Nelson, there are some whose experience is from a different type of skating. Second-year Kevin Clarke had previously played hockey, but was not interested in continuing play at a college level.

“I just decided I really wanted to learn how to do all the cool tricks I had seen the figure skaters do so that’s when I made the switch,” Clarke said. “I can do some cool tricks but not the cool jumps or spins yet. I can jump but I can’t jump and spin together.”

Other members have no experience at all, such as first-year Zarni Phayre. Phayre is from Thailand where he had never had the experience of ice skating presented to him.

“In my country we don’t have ice skating in school and it’s a great opportunity. At first I didn’t know it was figure skating just ice skating,” Phayre said.

Since the team does have this variety of experience on the team, it makes their practices and the club in general a little bit unique. They do not participate in any competition, but they do provide an option to if there are skaters who are interested.

“If a skater wants to go to a competition by themselves, they can wear our UMaine shirts and jackets and compete independently,” Nelson said.

In addition to having all these different skill levels, the team does not have a coach. Getting ice time is a huge expense that is hard for the team to manage and having to pay a coach to call all the way from Augusta for an hour once a week would add to this expense. In order to combat this, the members of the club help each other and teach each other new things.

“It’s very independent. We have a lot of people who are just beginning…as you get better the hard things become your warm up,” Hilt said. “We all support each other. We all help coach each other.”

Even though the improvements are different for everyone, each member of the team has managed to progress, whether it be from not holding onto the wall anymore or completing a triple axel.

Not only does the team not have the coach, but in order to combat the cost of using the ice rink, they are only able to have 10 practices a semester, at the cheapest time, from 10-11 p.m. Because of this lack of practice, the members of the club have the responsibility of doing work on their own to stay in shape. Each member does different things to stay in shape. Hilt is a member of many dance clubs on campus, as many figure skaters are. Clarke has a different method of staying in shape and practicing ice skating: roller blading.

“I think rollerblading does help. You are balancing the same and using the same muscles but on ice you have a lot more freedom because you are sliding, where on concrete if you are turning you have to do a lot of steps,” Clarke said.

No matter what level the members of the club are at, they all have their own goals that they work towards as a team. Nelson says that they have a hope to eventually make another team within the figure skating club. This would require a coach to help them be able to compete.

“We would like to start a synchronized skating team within the next five years,” Nelson said.