IMRC showcases the thematic photography of artist Will Rogan 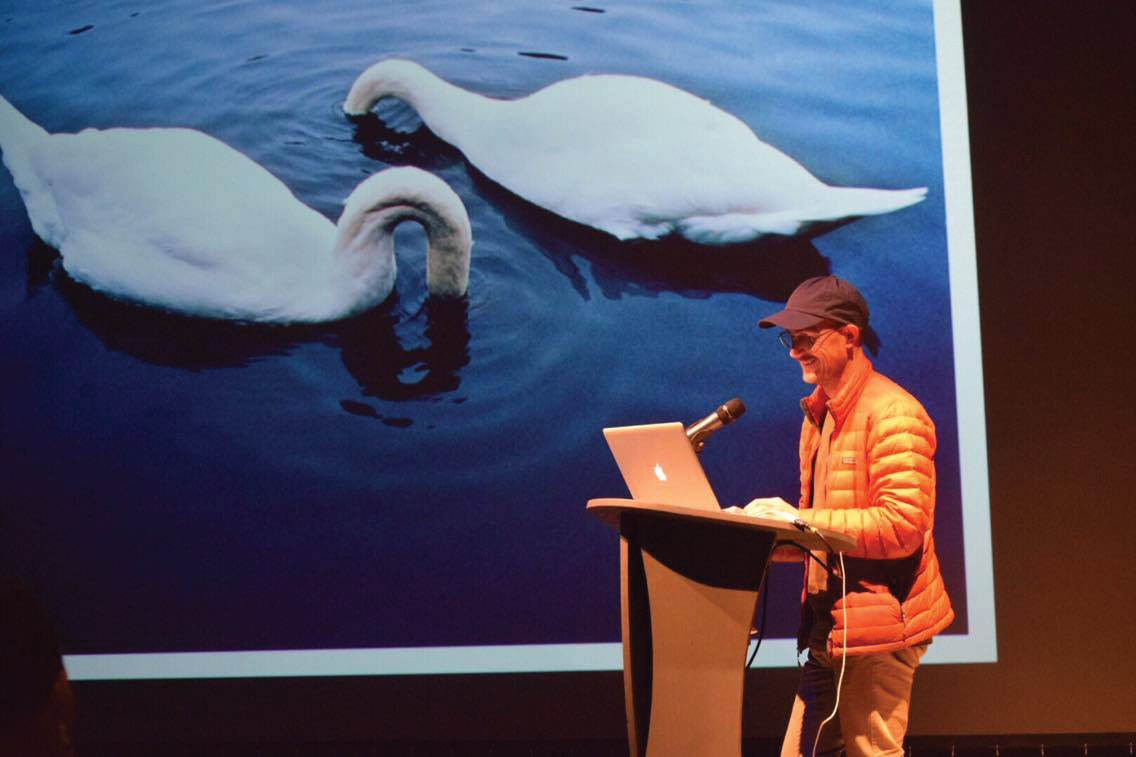 A white hearse alone in an empty field is what viewers gazed at from the audience of Will Rogan’s presentation for the the Innovative Media Research and Commercialization Center’s (IMRC) weekly “Visiting Artist Series.”

What appeared to be a still image at first, the hearse slowly began to explode before viewers’ eyes, tiny fireworks bursting forth as the slow-motion video began to play. “The hearse was actually filled with fireworks,” Rogan said as he described his methods for carrying out the project. “The explosion guys were just kinda winging it, but the camera guy really knew what he was doing.” Rogan described how he designed the project, which was professionally shot with a slow-motion camera, allowing viewers to slowly watch the refurbished vehicle deconstruct. The eight-minute-and-10-second silent video short, entitled “Erase,” was the focal point of Rogan’s first solo art show at the Berkeley Art Museum in 2014.

Rogan showcased a slideshow presentation of various compilations of his work. Primarily focused on conceptual art photography and installations, Rogan displayed a thematic tendency to show abstract images of the commonalities in everyday life, with an emphasis being the passing of time. With images ranging from road construction to pieces inspired by his own daughters, Rogan materialized his range of inspiration based on the influences of his daily life. Rogan explained how due to lack of studio space following his graduation from art school, he began to bring his camera with him everywhere he went, using the outside world as his studio. The intention of conceptual photography is to represent an idea. The concept, while preconceived, is intended to be understandable in the completed image. The compilation of Rogan’s work included various images captured while out and about in his everyday world, one of which was an image of the artist himself highlining over the San Francisco Bay.

In addition to his artwork, Rogan has made other artistically-minded endeavors, one of the most well-known being “The Thing Quarterly.” “The Thing Quarterly” is an object-based publication that sends useful objects designed by contributors. Four times a year, subscribers receive creatively enhanced objects, ranging anywhere from shoelaces to boomerangs. During his presentation, Rogan highlighted “The Thing Quarterly” as a project and one of his many artistic dimensions. The publication is based in San Francisco and has grown significantly since its founding in 2006.

The IMRC holds the Intermedia MFA Visiting Artist Series presentation every Tuesday in the Adaptive Performance and Production Environment. On Tuesday, Nov. 15, the series will feature artist and educator Katarina Burin, who is a Lecturer of Visual Art at Harvard University. Burin is best known for her drawings, models, collages and installation work, holding a particular emphasis on modernism, female architects and historical documentation.

The presentations vary in forms of art and media and are free of charge for any who wish to attend.