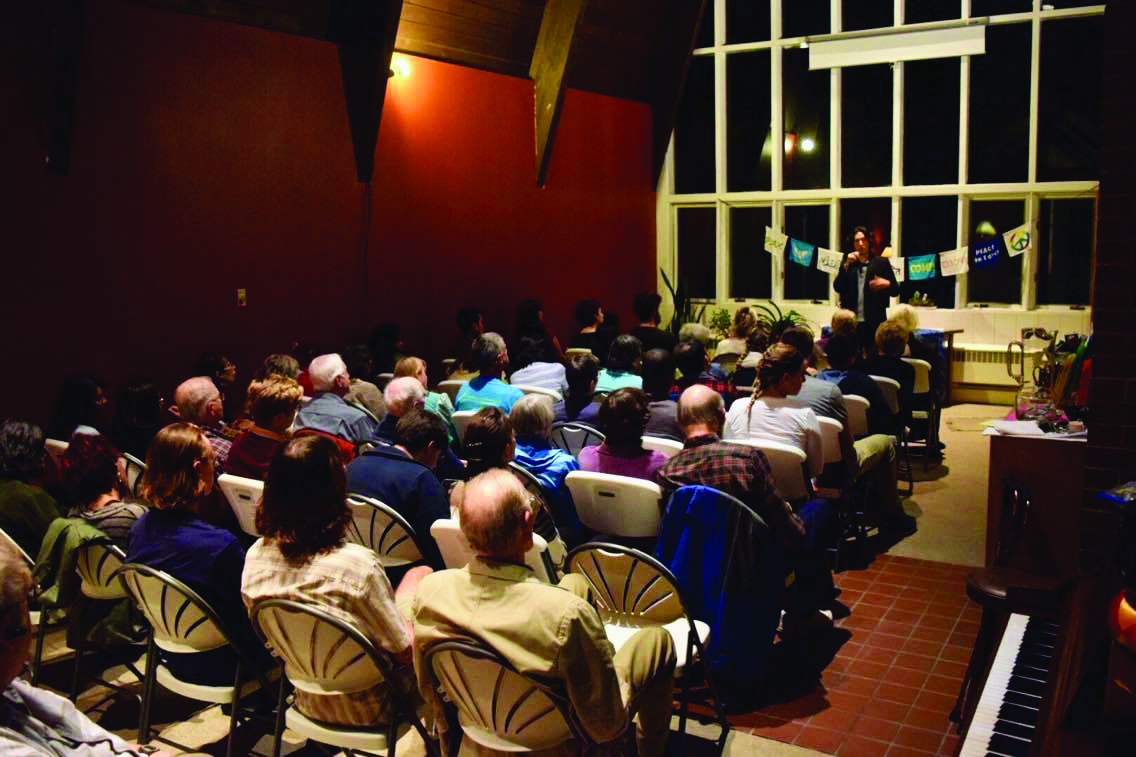 The Wilson Center had a full house on Wednesday, Oct. 19. There was hardly any open space to stand in the small building as guests enjoyed their spaghetti dinner. In the back of the room, Paul K. Chappell made small talk as the dinner tables were cleaned up and folded away. Once everyone settled in at 6:30 p.m., he opened his presentation with a heavy question and a casual tone: “With all the bad things going on in the world today, is it realistic to remain hopeful?”

Chappell came to the University of Maine, as well as the College of the Atlantic on Tuesday and Unity College on Thursday, as part of his 2016 Maine Tour, to discuss “Why World Peace is Possible,” and in particular, the hurdles that humanity continues to struggle with in the pursuit of this goal.

As a former soldier and the current Peace Leadership Director of the Nuclear Age Peace Foundation, Chappell has developed a nuanced understanding of the world in peacetime and war, combining his experiences growing up, his education at West Point, his time serving in Iraq and the constant shifting in international culture over the course of history.

Chappell noted that while the current state of the world is not perfect, there have been significant improvements over a relatively short period of time. These changes are so dramatic that it’s difficult to imagine how much worse it was. To prove this point, he asked the audience to roleplay: “You’ve traveled back in time,” Chappell began, “and I’m a group of British people from the 1200s. Now try to convince me that all white people should have the right to vote. But first, try to explain what ‘white people’ are. Then explain why voting doesn’t go against the divine right of kings.”

He then followed up with another roleplay scenario that began along similar lines: “I’m a Christian congregation a few hundred years ago in Europe, convince me that slavery is always wrong, no exceptions. But this won’t be entirely accurate; I won’t throw things at you, yell at you, or try to kill you. I’m going to try to be civil about it.” The suggestions of the audience fell on deliberately deaf ears. “Not everybody should be slaves,” Chappell jokingly responded, “come on, I’m not an Anglo-Saxon.” The scenarios served to demonstrate that throughout recorded history, humans compartmentalize others under ‘us’ or ‘them,’ ‘human’ or ‘sub-human.’

The reason for this, Chappell chalked up to what he called the universal human phobia: “98 percent of people have a fear of interpersonal human aggression…We are so vulnerable to human induced trauma, a human being doesn’t have to touch you to traumatize you. They can betray you, humiliate you, abuse you, spit in your face…Humans have intense fear of being hurt by other humans. This makes it very easy to manipulate us.” To Chappell, interpersonal trauma is an often underestimated issue for humanity and serves as proof that humans are not naturally violent. If we were, “why would war be traumatizing to us? There has not been one single reported instance in history of a human being traumatized from inflicting or by being inflicted by an act of kindness.”

What should we do in the face of these issues? The key to progress, Chappell believes, is a better understanding of peace. “Today, we are wrong about human condition and peace.

If you want to play a sport or an instrument, you need to practice. But people see peace as a goal, not a skill set that needs to be trained. When you hear people like Martin Luther King, Jr., you’re seeing the product, not the training…A person has to be as skilled in waging peace as a soldier is skilled in waging war.”

Paul K. Chappell is the author of “The Road to Peace,” a series of five books on the subjects of peace literacy and ending war. The sixth book will be published in 2017.