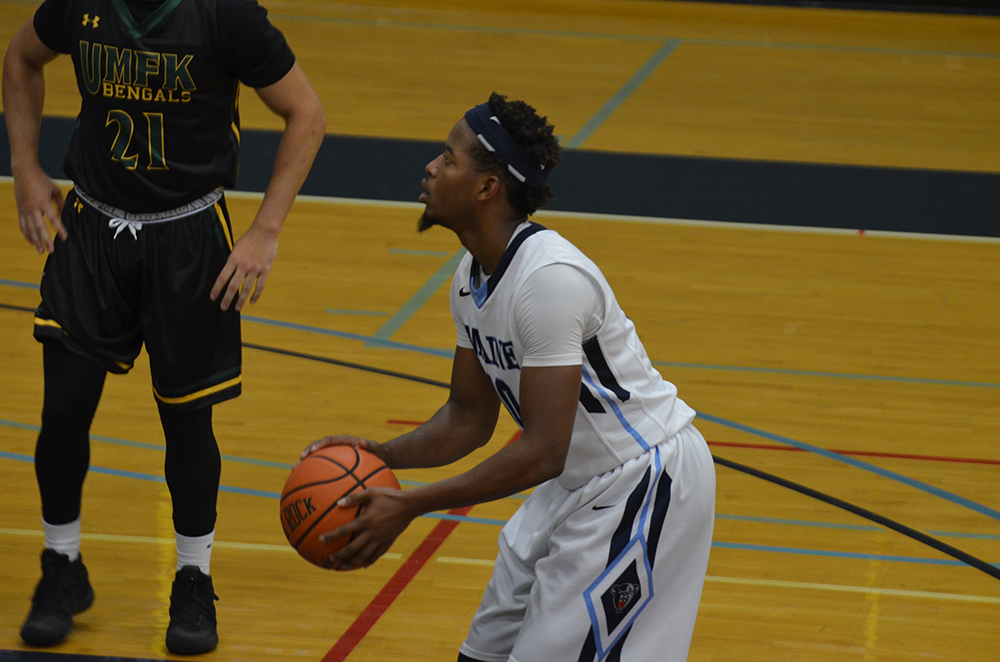 The University of Maine Men’s Basketball team fell in their second preseason game to the University of Maine Fort Kent Bengals on Saturday, 80-75. The Bengals were led by a dominant performance from fourth-year guard Roosevelt Smith Jr., who finished the game with 29 points and five steals.

From the opening tip the Bengals established themselves, making it clear that they came to play.

“We didn’t come in here thinking that we were just trying to keep the game close and then thank them for the invite,” Fort Kent Head Coach Tom Bird said. “We came to win the game.”

Fort Kent started the game on a 12-4 run, jumping on the Black Bear guards early in the game with steals that lead to fast break layups. Their quickness and instincts seemed to outmatch the guards of Maine.

“We have a really good offense that accentuates the guards that we have,” Smith said. “We can get guys on the dribble and put pressure on the guys that are guarding us.”

Maine never led in the first half, going into the locker room down 36-34. They were able to take the lead early in the second half, but were unable to keep it in a back and forth second frame.

But when the Bengals were given chances to wilt towards the end of the game, they instead seized the moment. Smith walked to the foul line with his team’s lead only 76-75 with 11.5 seconds to play and knocked down two big foul shots to make it 78-75. On the ensuing inbound, he was able to get a quick steal, forcing the Black Bears to foul him again. With 1.4 seconds left, Smith again hit both free throws as the Bengal Fans in the gym began to get louder, realizing their team was going to pull off the upset.

Maine Head Coach Bob Walsh was unavailable for questions after the game.

When it came down to it, the Fort Kent backcourt of Smith and third-year Bobby Syvanthong, who finished with 14 points, five assists and four steals, was just too much for the Black Bears.

“Everybody wants to go D-1. We’re just a little school up in Maine,” Smith said after the game. “For them to be the only Division I school in Maine and for us to beat them? That’s huge. We really wanted this game, for sure.”

Bird said he prepared his team for a tough game but also made it clear to them that they were ready for the challenge.

“We’ve played nine preseason games in Canada already, so we were more than prepared. We had maybe our best week of practices this week,” Bird said. “I just told them if they could believe and they could play with intelligence they’d be just fine.”

The schedule certainly doesn’t get any easier for the Black Bears, who now must prepare for their opening game of the season on the road against Virginia Tech on Nov. 11. Fort Kent travels to Husson University on Wednesday, Nov, 9.