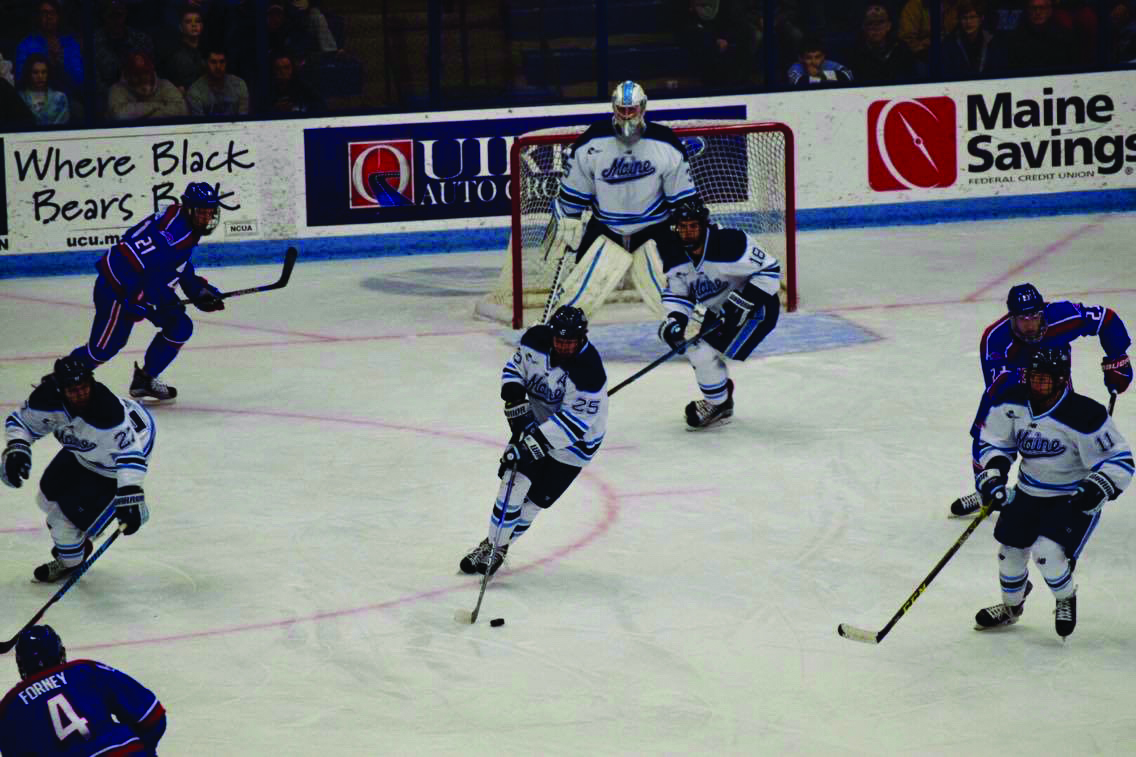 In a Veterans Day matchup at the Alfond Arena, the No. 5 University of Massachusetts Lowell (7-3-2, 3-1-0 HEA) River Hawks fell to the University of Maine (4-6-2, 1-3-0 HEA) Black Bears by the score of 5-2. Fourth-year forward and assistant captain Blaine Byron led the Black Bears in the chippy contest by notching a hat trick.

The game was full of scoring, but it was in the final period when the Black Bears truly exploded on the scene, pulling ahead of UMass in the waning moments. Fourth-year forward and team captain Cam Brown found the back of the net off assists from second-year forwards Brendan Robbins and Dane Gibson with less than 10 minutes remaining the period. Maine’s second goal of the period was scored on the penalty kill. UMass pulled first-year goaltender Tyler Wall in favor of an extra attacker while on the power play, leaving the goal empty. Byron took this opportunity to net the final goal on the empty net, giving him a hat trick on the night.

Seconds after this goal, a fight broke out on the ice, ending in River Hawks third-year defender Tommy Panico and Maine third-year forward Nolan Vesey getting two minute minor penalties along with 10-minute game misconduct penalties. At the final horn, more penalties were assessed after the teams started a second fight. Fourth-year defenseman Dylan Zink and first-year forward Chase Pearson were both given five-minute penalties for facemasking as well as 10 minutes for misconduct.

“You asked me about physicality and it’s obvious you watched the game and were like ‘wow these guys are getting after each other, it’s crazy.’ Well making plays and making decisions on the ice where people are like Hunger Games, that’s college hockey and that’s how it is every night. That’s why it’s so much fun,” Maine Head Coach Red Gendron said.

The first period alone saw four goals, two from each team, along with two plays that were called non-goals on the ice but had to be reviewed. Within seconds of the start of the game, Byron found the back of the net off an assist from Brown. This score created a contentious sentiment on the ice, a trend that continued throughout the entire game. UMass Lowell returned with a goal to knot the score a little over seven minutes into the game. Third-year right wingman Gage Hough netted the puck off an assist from fourth-year captain and defenseman Michael Kapla.

The score was knotted for less than 30 seconds, as Byron found the back of the net again on a goal that developed from a scrum at the net. First-year defender Patrick Holway got the assist on the play. Maine controlled the lead until the last minute of play in the period when UMass Lowell evened the score. With 38 seconds left in the period, Zink and fourth-year assistant captain and center Joe Gambardella passed the puck to third-year right winger John Edwardh, knotting the score at 2-2.

The second period did not see much scoring action, but for second-year defender Rob Michel, it was the perfect opportunity to net his first goal of the season. Maine took advantage of UMass’s inability to score on the power play and managed another effective penalty kill, netting a goal in the process. Michel scored off an assist from Brown and third-year defenseman Mark Hamilton, giving Maine a lead that they kept for the remainder of the game.

“It was definitely nice to extend the lead. I felt like we really pressed the gas in the third,” Michel said.

Second-year goaltender Rob McGovern earned the win on the night stopping 31 out of 33 shots in goal, while Wall took the loss stopping just 22 out of 27 shots between the pipes for the River Hawks. Neither team was able to capitalize on their power play opportunities in the contest.

“They played better than us tonight. There were a lot of things that weren’t quite up to snuff and they made us pay for it. I thought we were chasing the game a little bit and they got to the puck a lot of times before us,” UMass Lowell Head Coach Norm Bazin said.

The suspension of Panico, Vesey, Zink and Pearson was discussed, but no final decision has been announced.

On the backend of a home-at-home series with Hockey East conference rival UMass Lowell, the University of Maine men’s hockey team fell by the score of 4-1 on Sunday. The second game of the weekend series, played at the Tsongas Center in Lowell, Mass., featured four different scorers and two power play goals for the River Hawks, who dominated the contest from the opening horn.

The loss moves Maine to 0-2-2 on the road for the season, an area the Black Bears have struggled in from the start. All four of Maine’s victories have come on home ice.

“You always want to leave the weekend on a good note and we did that today,” Bazin said in a press conference following his team’s victory. “We are happy to get the split in Hockey East after dropping the first one. They are an excellent hockey team and I am very proud of our effort tonight.”

Gambardella netted a power play goal for the River Hawks at the 12:59 mark of the middle period which extended UMass Lowell’s lead to 3-0, putting Maine’s chances of a comeback far out of reach. Zink and Kapla assisted on the play.

Maine’s only goal of the contest would come in response, scored by Gibson, with Brown and Byron assisting on the play.

Zink helped set up the River Hawks second power play goal of the contest which came just over five minutes into the third period. Zink sent a pass to third-year forward Jake Kamrass who found twine on Maine’s McGovern, giving UMass Lowell a 4-1 lead that they would hang onto for the remainder of the contest.

The River Hawks notched the first two goals of the contest in the opening period, scored by third-year forward Ryan Lohin and Edwardh. Lohin found the back of the net on a slapshot after receiving a pass from Zink, who finished with three assists in the contest.

Edwardh doubled UMass Lowell’s early advantage at the 13:05 mark of the first period, scoring on assists from third-year forward C.J. Smith and Gambardella.

Wall stopped 20 of the Black Bears’ 21 shots on the night and improves to 7-2-1 in net for UMass Lowell on the season. McGovern stopped just 25-of-29 for Maine and moves to 4-5-2 between the pipes on the year.

Maine returns to conference action next week when they travel to Burlington, VT to take on the University of Vermont Catamounts for a two-game series. Puck drop is scheduled for 7:05 p.m. on Friday. UMass Lowell will go on to play Notre Dame on Thursday, Nov. 17 in South Bend, Ind. with a puck drop scheduled for 7:30 p.m.