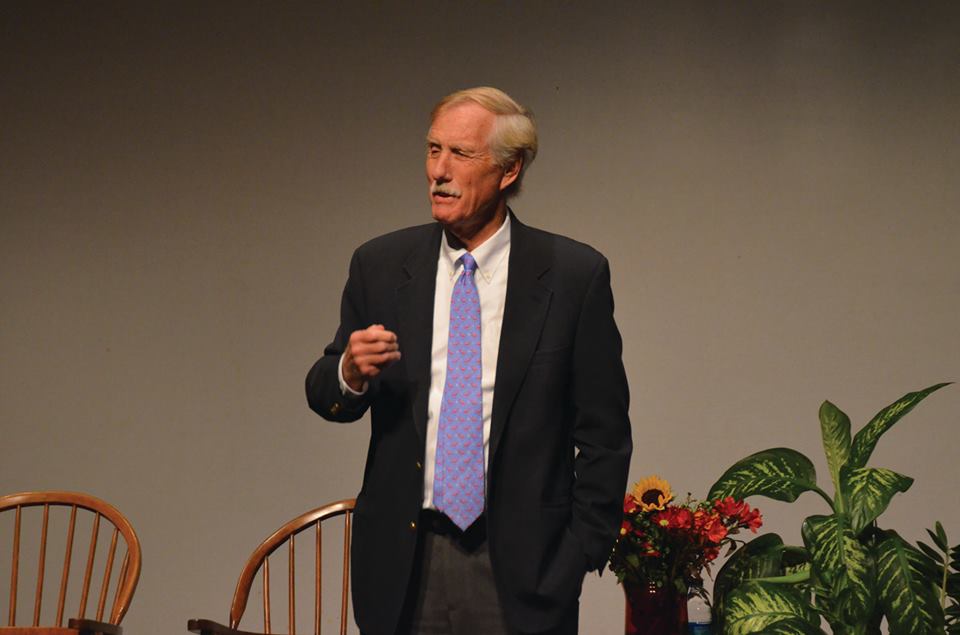 On Thursday, Nov. 10, Maine Independent Sen. Angus King spoke in the Collins Center for the Arts at the University of Maine about climate change and his recent trip to Greenland. King’s speech was an installment of the Margaret Chase Smith Lectureship on Public Affairs.

The Margaret Chase Smith Policy Center is a UMaine research and public service organization focusing on civics, the economy, energy and public health policy. The policy center was named after Margaret Chase Smith, a Maine native and the first woman to ever hold positions in both the U.S. Senate and House of Representatives.

The presentation, “Maine and Climate Change: The View from Greenland,” included several data visualizations portraying the increase in atmospheric carbon dioxide and temperature. The increase accelerated around the same time in history that humans began using fossil fuels.

The presentation focused much on changes in sea level due to increasingly rapid glacial melt. King informed the audience that “a foot a decade” of sea level rise is what scientists expect to see. King also discussed the “sunny day floods” in Miami, during which the streets flood up through the storm drains when it is not raining.

King observed receding glaciers while in Greenland and described a glacial feature known as a moulin. A moulin is a column through which melt water from the surface of a glacier travels to the ground beneath the ice sheet. This melt water then lubricates the space between the glacier and land, moving the ice towards the ocean at a faster pace. Moulins in Greenland are increasing in frequency and size.

Maine’s seafood industry is already seeing negative effects of climate change. Ocean acidification occurs through the absorption of atmospheric carbon dioxide into the ocean. Carbon dioxide in the ocean causes a decrease in the calcium carbonate that shellfish need to develop their shells.

King stressed the importance of inter-party political discussion about slowing the pace of climate change in order to come up with real solutions. King was gifted a framed photo of himself holding a portrait of Margaret Chase Smith at the end of the lecture.

King expressed regret over the fact that climate change was not a topic during the presidential debates. He believes that there is opportunity for profit in renewable energy and hopes that energy companies and policy makers will be open minded on the subject in the future.
King was a private law practitioner and Maine’s 72nd governor before becoming a senator in 2013. He founded Northeast Energy Management, Inc., an oil and gas well drilling company.

King grew up in suburban Virginia and attended law school at the University of Virginia after receiving his undergraduate degree from Dartmouth College in 1966.