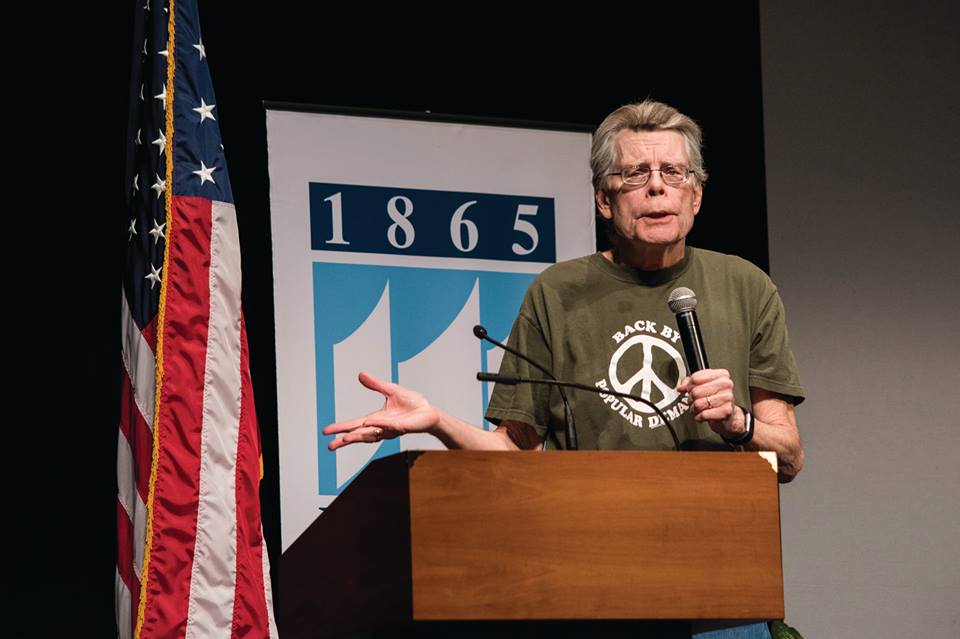 Fans of legendary horror author and Maine native Stephen King packed the Collins Center for the Arts at the University of Maine on Monday, Nov. 7 for the release of his new book “Hearts in Suspension.” The event featured UMaine President Susan Hunter and honored guest King, who promoted his new book with a brief reading followed by a discussion concerning the political movements that established during his formative college years at UMaine from 1966-1970.

The new 373-page book, published by the University of Maine Press, features a handful of essays by college classmates and colleagues of King, including an essay King authored himself titled “Five to One, One to Five.” It also includes a reprint of the novella “Hearts in Atlantis,” King’s fictional assessment of his first year at UMaine.

Additionally, the book features four pieces from “King’s Garbage Truck,” a weekly column that appeared in The Maine Campus when King wrote for the student newspaper.

King was introduced on stage by Jim Bishop, former UMaine English Professor and Editor of “Hearts in Suspension.” Bishop was King’s first-year English composition professor when he arrived in Orono in 1966.

“In September 1966 I walked into a classroom of freshman comp and Mr. King was one of the students in that classroom. He’s never let me forget, by the way and I have to pull a march on him before he says it, that I gave him a C+ on his first freshman comp paper. And that’s going to go on my epitaph,” Bishop joked.

While on stage, King recalled his days at UMaine, discussing the “turbulent” political times he and his classmates encountered during their college years, sharing that UMaine was a lively place of protest during this time. King and his friends protested the war and spread the message of peace.

King referred to his new essay in “Hearts in Suspension” as “a book of memory, not a memoir,” meaning King recalled most of the information depicted in “Five to One, One to Five” from memory rather than through research. This move was made for King to personalize his experience for his readers.

When first pressed about the project by Bishop and Michael Alpert, the Director of the University of Maine Press, King was hesitant to recall his time at UMaine because of what he and his classmates endured during the period.

The event ended with King and his colleagues discussing the book and their individual essays.

King is allowing all proceeds from the book to go to the UMaine Press, giving the entity a profitable route to publish future publications.