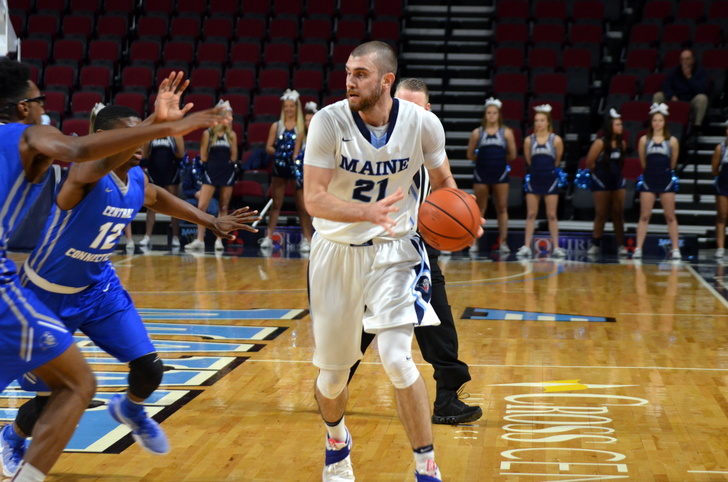 Maine’s first-year forward/center Andrew Fleming did all he could by putting on a 20-point showing for the University of Maine Black Bears (2-6) in their 82-61 loss to the Central Connecticut State University Blue Devils (2-3) at home on Wednesday night. Following the blowout loss, Maine dropped to 2-5 on the season as the Blue Devils improved to 2-3.

The Black Bears lost the contest in two simple ways. They allowed CCSU to get out to an extremely hot start that they never were able to overcome and they couldn’t defend the three-point shot or make any threes themselves. The Blue Devils shot 62 percent in the first half, entering the halftime intermission with a comfortable 41-24 lead and never looked back. For the entire game, CCSU connected on 10-of-14 three-pointers while strapping Maine to just a dismal 4-for-19. These two very simple miscues ultimately cost the Black Bears any chance of coming out victorious.

Maine technically won the battle inside as they outscored CCSU 38-32 inside the paint and coincidentally outrebounded them throughout the game 38-32. CCSU made up for their lack of interior play with defense and ability to shoot. They forced 16 Black Bear turnovers and outscored Maine 19-9 off of turnovers. The Blue Devils also shot 33-for-65 (59 percent) from the floor, opposed to Maine’s 25-for-64 (39 percent).

Fleming was Maine’s lone bright spot on offense, as he went for a game-high 20 points and eight rebounds. Fourth-year forward Marko Pirovic netted eight points and hauled in three rebounds. Maine’s third-year forward Ilker Er chipped in with 11 points and one steal. Third-year guard Wes Myers had an off night by his standards by just scoring 6 points and handing out two assists.

All of CCSU’s starters ended up in double-digits for scoring. However, the Blue Devils were lead by fourth-year forward Khalen Cumberlander, who scored 13 points to with five assists and two steals. First-year point guard Tyson Batiste was extremely impressive for the Blue Devils, he controlled the pace of the game and really picked the Black Bear defense apart all night long. Batiste poured in 12 points while dishing out five dimes and recorded one steal.

“We had a good week of practice, so to come out and play like this was just an embarrassment. I was hoping we would play much better tonight, especially with our biggest challenge of the season coming up next on Saturday,” Head Coach Bob Walsh said.

The Black Bears need to put this tough one past them as they travel to face their toughest test of the season on Saturday when they take on the No. 5 Duke Blue Devils at Cameron Indoor Stadium. The most hostile environment in all of college basketball and will be nationally televised by ESPN2 on Saturday evening with tipoff set for 5:30 p.m.

Maine fell after a tight match with Duke

The Maine Black Bears traveled to the college basketball hotbed of the world on Saturday night to take on the No. 5 Duke Blue Devils (8-1) at the Cameron Indoor Arena and lost 94-55. Maine battled with everything they had in the early going and made it extremely competitive for the first 20 minutes of action. Maine’s third-year forward Ilker Er had a first half to remember by dropping in four three-pointers and scoring 20 of Maine’s 32 first half points.

If it weren’t for Duke’s second-year guard Luke Kennard’s spectacular buzzer beater from 35-feet deep, Maine would have only been down 43-32 heading into the halftime intermission. Er finished the first half 8-for-12 with 20 points. Unfortunately, he was held scoreless the rest of the way as it seemed Duke made it a point to shut him down since he was Maine’s only spark of offense in the first half.

Though the Blue Devils didn’t start off the game as explosive as they would have liked, Duke’s head coach Mike Krzyzewski was proud of the way his team took care of business on their home floor in front of a packed house.

“We came out slower than expected, but then finally put it all together. We were supposed to win big tonight and that’s what we did,” Krzyzewski said.

Despite Duke’s dominance being proven in the second half, Maine really continued to play smart and poised. The Black Bears only registered their season-low of 6 turnovers while forcing 12 out of Duke.

Certainly something that Head Coach Bob Walsh and his team can be proud of and continue to build on as they go forward playing much lesser opponents than Duke.

“Really proud of us to come in without our starting point guard and only have six turnovers against their pressure, their length, their ability. A good sign for us,” Walsh said.

Er led the way for Maine with 20 points and five rebounds on the night. Third-year guard Wes Myers was really the only other Black Bear to play well and truly compete against Duke as he netted 15 points and distributed three assists. Second-year guard Ryan Bernstein wasn’t shooting the ball well as he went 0-for-3 with 0 points, but he was a good floor general in handing out a team-high five assists.

Kennard paced the Blue Devils offense with his career-high 35 points to go along with eight rebounds and two assists. Duke’s fourth-year forward Amile Jefferson finished the game with a healthy stat line of 20 points, nine rebounds and four assists.

Maine’s head coach Bob Walsh is aware of how good of a thing that Coach Krzyzewski and the Duke men’s basketball program have going down in Durham, NC.

“I’m so impressed with Duke and what Coach K does here. Everything about their program, it’s the elite program in college basketball and I’m proud of the way my guys competed here tonight,” Walsh said.

Meanwhile, Duke improves to 8-1 on the young season after their win over Maine. Maine hopes to get back in the win column when they return back home on Wednesday, Dec. 7 to play host to Holy Cross with tipoff set for 5:30 p.m.