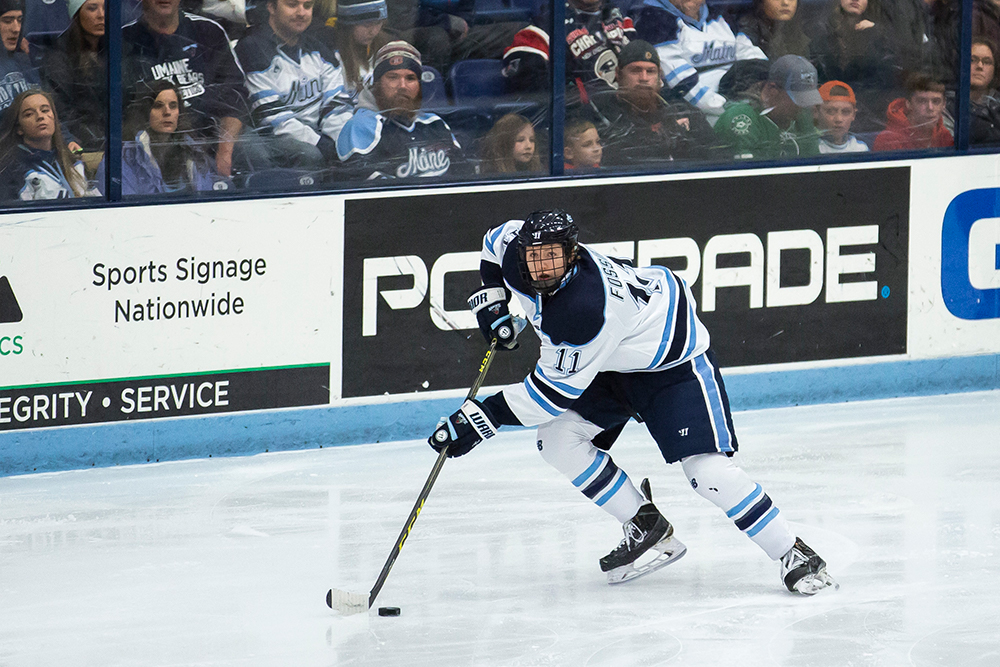 The University of Maine (5-9-3, 1-6-1 HEA) men’s hockey team dropped the front end of a home-at-home series with Hockey East Conference rival University of New Hampshire (8-6-2, 5-1-1 HEA) on Friday night. After leading 1-0 at the end of the first, the Wildcats tallied a two-goal middle period before pouring on three goals in the third, routing Maine by a 5-1 score.

Maine had no answer for the Wildcats or fourth-year forward Tyler Kelleher through the final two-thirds of the contest, as Kelleher went on to post back to back power play goals in the middle period, moving his team into the lead and added an assist in the third.

Kelleher notched his first goal at the 6:23 mark of the middle period on an assist from fourth-year defender Matias Cleland. Third-year forward Michael McNicholas swept the puck back to Cleland at the point, who located Kelleher open in the slot. Kelleher received the pass and rifled a wrist shot that deflected off a stick in traffic and deflected into the top right corner of the net, beating second-year goaltender Rob McGovern to knot the score at 1-1.

Kelleher added an unassisted power play goal more than eight minutes later in the period to give the Wildcats a one goal advantage. Kelleher corralled a puck at mid-ice, skating alone up to the red line and cutting across the goalmouth before ripping a shot into the back of the net to secure the UNH lead.

UNH added three unanswered goals in the third period to put the game away. The first Wildcats goal of the period came at the 2:42 mark of the period scored by first-year forward Brendan van Riemsdyk. Riemsdyk was screening McGovern and tipped a shot from the point by third-year defender Cameron Marks into the net for a 3-1 score.

Third-year forward Jason Salvaggio netted his eighth goal of the season later in the period, resulting in Black Bears Head Coach Red Gendron replacing McGovern with fourth-year netminder Matt Morris, who played the remainder of the contest. Kelleher skated into the slot and fired a shot on net that rebounded out into the crease, where Salvaggio recovered the puck and fired home a shot from just a few feet out.

Marks notched the final UNH tally on a shot from the point assisted by Cleland late in the third period.

Maine’s lone goal in the contest came from standout first-year forward Mitchell Fossier, who connected on the power play to give Maine the lead with less than seven minutes remaining in the period. Fossier’s goal was his team-leading seventh of the season.

McGovern made 21 saves in 54:18 of action and moves to 5-6-3 in net for Maine on the season. Third-year goaltender Danny Tirone was stout in net for the Wildcats, stopping 23 saves on the night and improving to 7-4-2 on the season.

Maine had just two power play opportunities in the contest and connected on one with Fossier’s goal. UNH went 2-for-5 with the man advantage.

Maine comes home for a bout on Friday, Dec. 9 when they face off against American International College in Orono at the Alfond Arena. Puck drop is scheduled for 7 p.m.

Maine falls to UNH at home

The University of Maine men’s hockey team lost their second game to the University of New Hampshire (UNH) in as many nights, as the Black Bears fell to the Wildcats 4-3 on Saturday night in front of a sellout crowd at Alfond Arena.

The Wildcats were led by fourth-year Tyler Kelleher, the team’s leader in points and first-year Liam Blackburn. The forwards scored all four of the team’s goals, netting two apiece.

The story of the game was penalties, something that has been an issue all season for the Black Bears. New Hampshire was able to turn three power plays into goals, was after they turned two power plays into goals the night before. Maine Head Coach Red Gendron noted that the penalties were the deciding factor in the game.

“We took some penalties we shouldn’t have taken. That’s it. And it cost us,” Gendron said.

Maine had several scoring opportunities in the opening period and it was the Black Bears who struck first. Thirteen minutes into the first period, second-year defenseman Rob Michel slotted it home on the assist from third-year forward Nolan Vesey to make it 1-0.

Maine looked like they may enter the second period with the lead, but things fell apart late in the first — a stretch that hurt the Black Bears in retrospect. With 3:06 left in the period, fourth-year Maine forward Blaine Byron was sent to the penalty box for tripping. One minute later, he was joined by third-year defenseman Mark Hamilton, putting the Black Bears at a 5-3 disadvantage on the ice. Kelleher was able to bang a slapshot home for UNH to tie the game 1-1.

“I had (Michael) McNicholas give me two nice passes,” Kelleher said. “The first one the goalie got and then on the second one I think there was an open lane and luckily I was able to put it in.”

Seconds later, with New Hampshire at a 5-4 man advantage, it was Blackburn’s turn. The forward found himself next to the goalpost on the end of a string of UNH passes and was able to flip the puck over Maine second-year goalie Rob McGovern’s glove to take a 2-1 lead into the first intermission.

The second period was when the game started to show its rivalry colors, as the two teams started to get physical after the whistle. With 9:11 to play, a scuffle broke out in front of the Maine goal as Maine first-year forward Peter Housakos was seen wrestling UNH’s fourth-year forward Jamie Hill down to the ice in a headlock. Housakos and redshirt second-year forward Malcolm Hayes were penalized for the Black Bears.

“We’re always trying to stay disciplined,” Kelleher said. “Especially in this series with all the emotions and the crowd.”

The Wildcats were able to convert another power play goal with 3:31 left to play in the second period. It was second-year forward Ara Nazarian getting the puck to Kelleher who sent it cross ice to Blackburn, who slotted it past McGovern into the top right corner of the net.

“I think their defender might have screened a little bit. I just tried to get it past him toward that glove side and placed it right inside the post. That was a big goal for us,” Blackburn said.

The Black Bears, down 3-1, came into the third period aggressive. Maine was able to generate at least three good chances within the first minute of the frame. Finally, 3:38 into the period, fourth-year forward Cam Brown was able to knock a loose puck in off a faceoff in UNH territory. It was Brown’s third goal of the season and it got Maine within one.

“I thought we carried play early and for the majority of the third. We used our speed and got our chances,” Byron said.

With the score 4-2 after another Kelleher goal for the Wildcats, Maine refused to quit. Their efforts were rewarded when Gendron pulled his goalie for a man advantage on offense. First-year forward Chase Pearson found the back of the net with 25 seconds left for his fifth goal of the season, cutting the UNH lead to 4-3. But it was too little to late and there wasn’t enough time left on the clock for the Black Bears to finish the comeback.

After the game, Maine knew they had beaten themselves with their 11 penalties. They outshot the Wildcats 41-29 and could argue they had the better scoring opportunities. But power play goals cost them.

“You just gotta play hard and be smart about it and disciplined. We just have to play hard within the boundaries of play,” Brown said. “I know the new rule changes are difficult but every team is playing with the same rules. We just need to find a way to stay out of the box.”