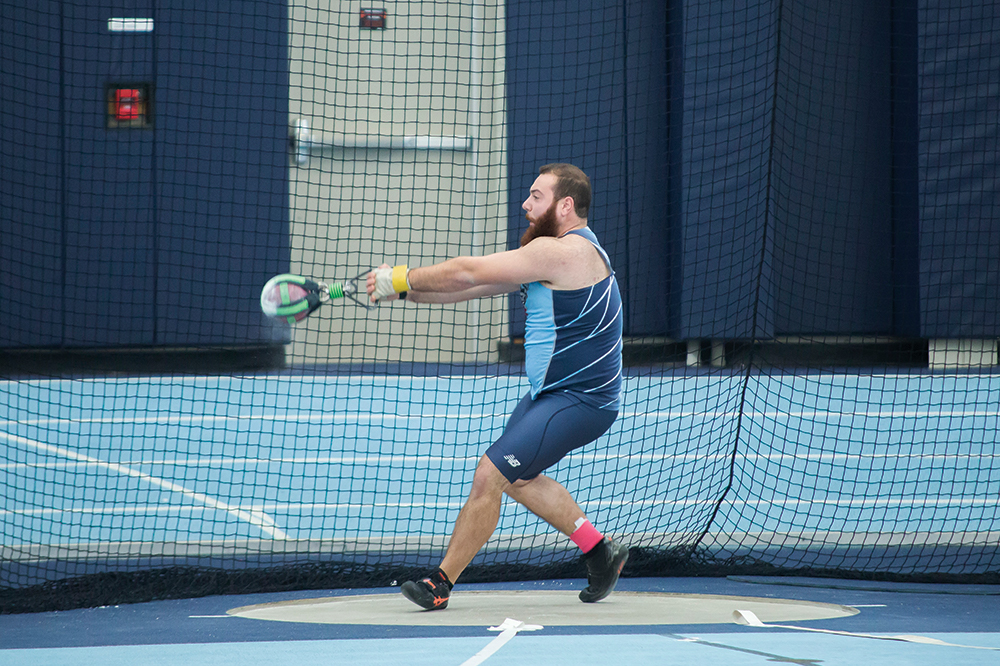 The University of Maine Men and Women’s Track and Field teams participated in their first meet of the season, hosting the University of New Hampshire (UNH). Maine looked to improve this season after the men finished in seventh place and the women in eighth during last year’s America East Championships. Both scores were close, with the men holding on 90-86 and the women coming up short 91-87.

In the first event for the men’s weight throw, the Wildcats started out strong as second-year Eric Brogioli came in first with a score of 15.79 meters. Maine’s fourth-year Shane Corbett and third-year Thomas Murray were close behind, with 15.5 and 15.46 respectively.

The women followed in the same event, as third-year Rachel Bergeron blew everyone away with a 16.76 meter score, where the next closest was 15.55. She started out the day by gaining five points for Maine.

“I wish we could’ve pulled out the win today, but I was so happy to see that number up on the board and it’s probably one of the best throws I’ve made in my entire life,” Bergeron said.

After New Hampshire swept the pole vault with first place finishes, Maine did the same with the long jump. Third-year Joseph Slattery had a score of 6.55 meters, while second-year Ariel Clachar had 5.61 meters. Both gained five points.

In the seventh event for the women’s high jump, four Wildcats came in the top four, with second-year Shelby Strickland getting a score of 1.7 meters for first place.

The Black Bears men came back in the same event with a victory by fourth-year Asaad Hicks, who had a jump of an even two meters and gained five points for Maine.

In the men’s shotput, the top six finishers alternated to which school they attended. Coming in first place was third-year Nicholas Ritzo with a score of 15.57 meters, with Maine’s Frantz in second at 15.24 meters.

Eight out of a possible 11 points were taken by the women in their shot put event, where fourth-year Ashley Donohoe and Bergeron placed first and second, with scores of 12.88 and 12.76 meters, respectively.

“It never feels better when your name is next to first place and I hope I can continue bringing my A game,” Donohoe said.

In the triple jump, the men for Maine swept the event as first years Troy Davis and Erick Seekins had scores of 13.22 and 12.32 meters to add eight points to Maine’s point total.

The men’s one-mile run came down to the wire, where fourth-year Jacob Johns outlasted second-year Brett Hoerner by less than half a second with a final time of 4:22.05.

Maine would not see another first place finish until the women’s 400-meter dash, as fourth-year Teal Jackson took the honors with a time of 1:00.13 and coming ahead by just a tenth of a second over New Hampshire’s first-year Elise Renahan.

“I saw that she was side-by-side with me the whole time and I wanted to put it in another gear when we were coming to the finish. Thankfully I was ahead by just enough and I was so excited to see my name pop up first,” Jackson said.

In the 60-meter dash for the men and women, Maine finished first in both as third-year Mozai Nelson had a time of 6.92 seconds and Clachar with a time of 7.91 seconds. Both gained five points for their team.

The men’s 1000-meter run saw Johns come out on top over five Wildcats. He had a time of 2:34.96, finishing almost two full seconds ahead of second-year James Busi.

Maine’s men and women swept another event in the 200-meter dash, where third-year Garrett Johnson had a time of 22.62 seconds and second-year Lauren Magnuson with 26.27 seconds. They each added five points for what would be a tight competition.

The men’s 4×400 meter relay showed a first place finish for Maine, as third-years Elijah and Isaac Yeboah and Garrett Johnson and second-year Tucker Corbett had a time of 3:24.60. Their one-point lead over the Wildcats become more comfortable after getting five points from the event.

Maine’s men and women fought hard in an extremely close meet, as the men came out on top of the Wildcats 90-86. The women made it close, but fell short 91-87.

“We could definitely improve in some areas, but it’s important that we came out strong and everyone put in their best effort. You can’t come in first every time and I’m pleased with the way we performed today,” Maine Head Coach Mark Lech said.

Swim team travels to Bowdoin
While we were away…