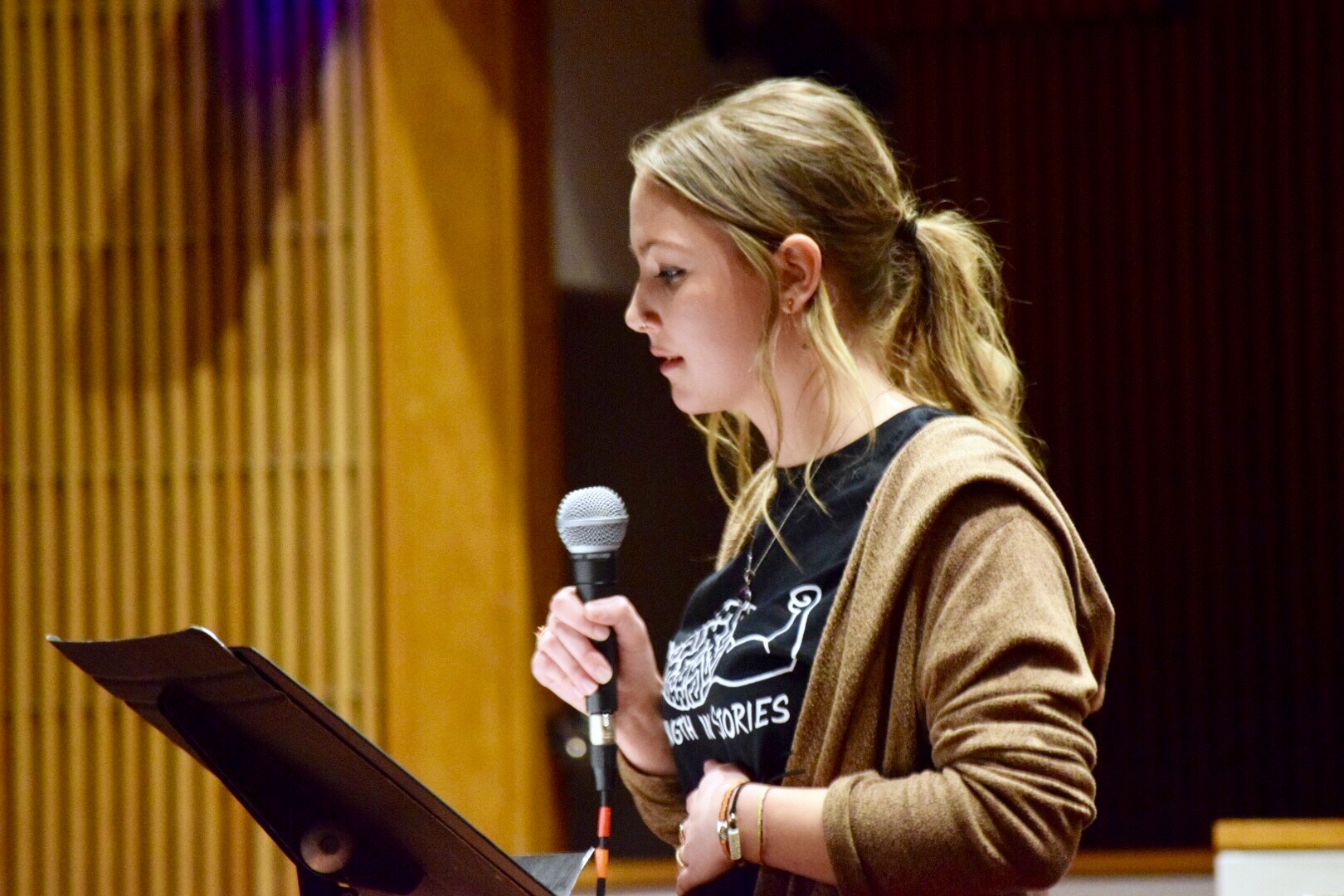 Storytelling is the essential part of human life. Stories we hear have the ability to shape us, to move us. Storytelling can empower and inspire us; telling stories also helps the storyteller and the audience overcome traumatic experiences.

Last Thursday, Feb. 23, University of Maine Active Minds used this powerful medium at the the Mental Health Monologues. With more than 400 campus chapters around the world, Active Minds is the leading nonprofit organization which encourages students to speak openly about mental health on college campuses. The University of Maine chapter of Active Minds holds numerous campus-wide events to engage students in discussions about mental health. One of them is Send Silence Packing, a national traveling public education exhibit of 1,100 backpacks that represent the 1,100 college students who annually die by suicide.

Active Minds was inspired by “The Vagina Monologues” to create the Mental Health Monologues.

A collection of women’s stories, “The Vagina Monologues” is based on real-life interviews surrounding women’s relationships with their bodies and the social stigmas of rape, abuse and female sexuality.

More than 150 people gathered in Room 100 of the Donald P. Corbett Business Building to listen to true stories of UMaine students with experiences of struggle and resilience in the realm of mental health and illness. A total of 13 stories about anxiety, depression, sexual violence, self-harm and suicide were performed. Some students read and wrote their own their stories, while others performed someone else’s stories. Either way, they were all personal, powerful and truthful.

“Some people may dismiss things like anxiety and depression as trivial and mood swings. I’ve done that before,” Nick Jensen, rising co-president of Active Minds, said. “I thought it wasn’t a big deal sometimes; but to hear some people’s stories and personal experiences with it, gives you perspective into how that experience works.”

A third-year psychology student, Jensen joined Active Minds his first year at UMaine. He believes that this organization makes a big impact on campus, and that is the reason he stayed in Active Minds.

“The messages we are pushing for are worthwhile,” Jensen said. “When I found this group, I found that they advocate. We talk about things that aren’t always talked about but are still so relevant in college.”

According to Active Minds, almost one-third of all college students report having felt so depressed that they had trouble functioning. Mental health issues in the college student population, such as depression, anxiety and eating disorders are associated with a lower grade-point average and a higher probability of dropping out of college. More than half of college students have had suicidal thoughts and one in 10 students seriously considers attempting suicide. Half of students who have suicidal thoughts never seek counseling or treatment.

Jensen wrote and read his own story about substance abuse and self-harm.

Before the monologues started, audience did not know what to expect. There was a trigger warning about potentially distressing material. During the monologues, the suicide prevention lifeline number: 1-800-273-TALK, as well as the counseling center number: 207-581-1392 were projected on stage.

“From the audience as a whole, I think everyone walked in unsure, and they walked out moved in one way or another,” Jensen said. Megan Pike, a third-year communication sciences and disorders student, agreed “a hundred percent.”

“I got a different feeling when I got out,” Pike said. A monologue that made a distinct impression on her was about depression and anxiety. Two people were on stage, and one of them was the voice of depression and anxiety. Pike shared that seeing someone conquer her own thoughts replay helped see into the lens of what someone is thinking. Another performance that stood out to Pike was a humorous poem about depression by Prateek Kunwar.

“It was so funny, it lightened up the room,” Pike said, recalling Kunwar dramatically throwing his papers after finishing a poem.

“The whole point of the monologues was break the stigma. It’s true, they were really breaking the stigma, it was truly worthwhile,” Pike said.

If you want to educate yourself about truths and myths behind mental illness, visit UMaine Active Minds on Facebook.

A Black Bear Abroad: University education is a pleasant surprise
Addressing the topic of diversity through UMaine’s “Diversity Dialogue”