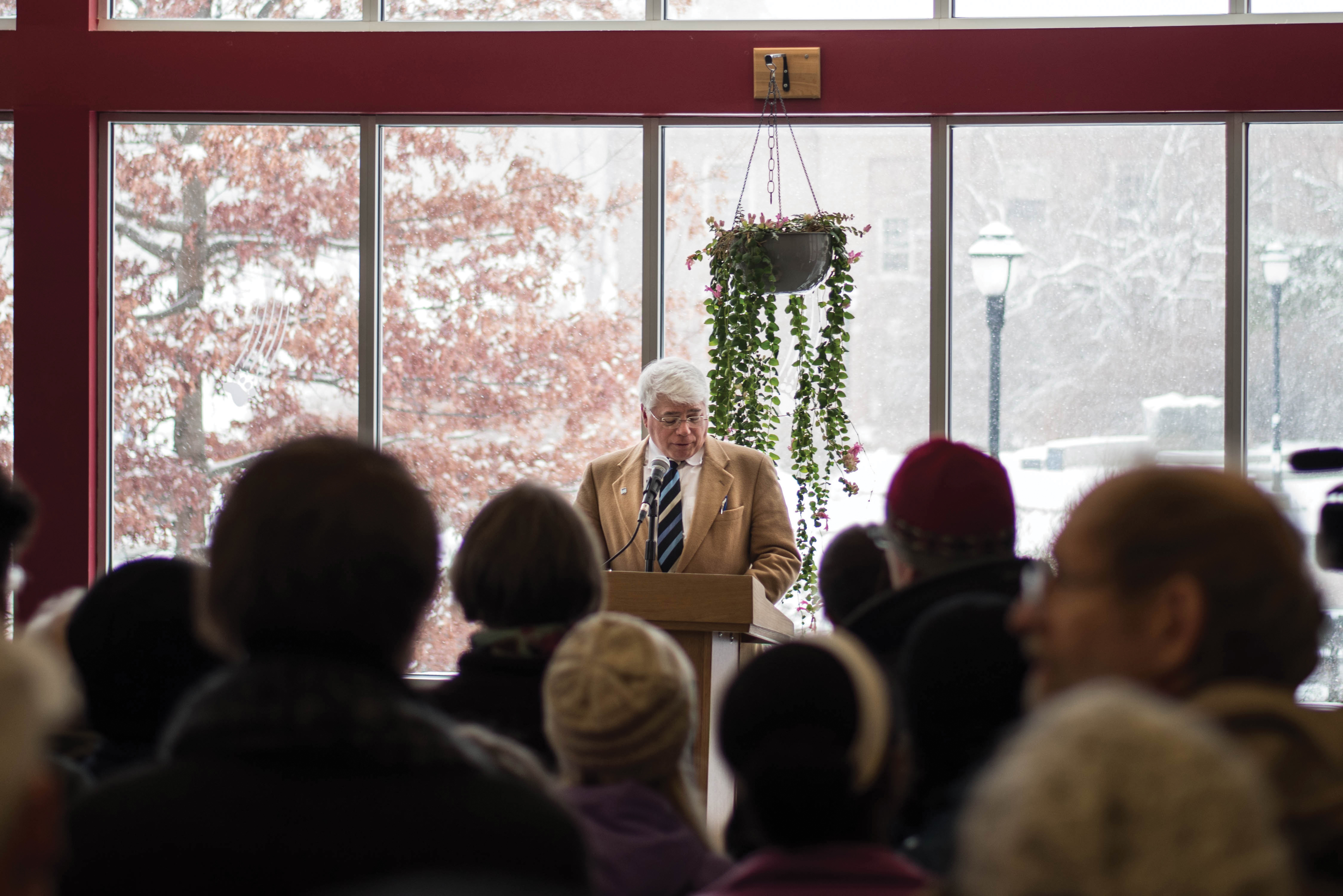 Just past noon last Wednesday, Feb. 1, in front of the Memorial Union, students, faculty and community members alike braved the snowy weather to gather in support and solidarity as a Black Lives Matter (BLM) flag was raised high in front of the Memorial Union. The UMaine Multicultural Center, in collaboration with the Black Student Union (BSU), hosted the flag raising ceremony to kick off Black History Month.

People from near and far bundled up in winter gear to witness the ceremony and afterward reconvened in the North Pod of the Memorial Union to listen to various speakers weigh in on the Black Lives Matter movement. Silvestre Guzmán, director of the UMaine Office of Multicultural Student Life, welcomed the crowd first and thanked the packed room for making the effort to show their support. He was the first of many speakers to remark about the sheer size of the crowd, which far surpassed initial estimates.

“For anybody who isn’t sure about the Black Lives Matter movement,” David Patrick, a graduate assistant at the Office of Multicultural Student Life, said at the podium, “it doesn’t mean that other lives don’t matter, or that black lives matter more. It just means that black lives matter. That’s it. They matter.” He remarked about how diving into the territory of race often makes people uncomfortable and that can stifle discussion. “We have to build bridges, not with just the people we’re comfortable with, but with those we aren’t as well,” he continued.

Patrick talked about the Black Lives Matter movement as one of intentional inclusion, which often gets misconstrued. Regardless, he finished by looking out on the faces of the crowd and concluded that this was a good start.

Dean of Student Life Dr. Robert Dana gave a speech to follow, beginning with the history of Black History Month and insisting, “We must keep talking so that black history becomes American history.” The significance of Black History Month is, “to honor the often neglected accomplishments of black citizens, and to celebrate those accomplishments,” he added, stressing that this particular ceremony was of utmost importance to the university. Lastly, Dana observed that the support shown at the event was an “indication of a welcoming community.”

The next speaker, Lee Jackson, a UMaine student and Old Town local, emphasized the accomplishments black Americans have made since they were “once considered property.”

“We didn’t come this far, to only get this far,” Jackson said. His words resonated with the crowd as cheers and applause rose from the crowd, which turned to laughter as he continued to remark about the progress we have yet to make despite the fact that our country has had a black leader, “Michelle Obama.” He reiterated that movements like the BLM movement will not stop “until members of the black community are treated as equals.” Rounding his speech out, Jackson reminisced about Martin Luther King Jr.’s message from the civil rights movement, saying, “he preached about love, just as much as he preached about justice.”

“Black people are only looking for equality, not revenge,” president of the Black Student Union (BSU) Kirsten Daley said. The Black Student Union supports the BLM movement to “end police brutality and systemic racism, specifically anti-black racism.” Daley insisted that supporters must remember those members of the black community we have lost unjustly and continue to say their names aloud. Her speech culminated in the resounding message of the event; “black lives do, and have always mattered.”

The crowd overflowed the North Pod into the nearby hallways and dining areas and was made up of students, faculty and community members. Student leaders from various clubs like the Student Alliance for Sexual Health (SASH) and the Student Women’s Alliance (SWA) were present to voice their encouragement. Feelings among the crowd were positive and supportive and many were grateful that UMaine was holding the event at all, as it is one of the few schools putting together such an impressive array of events for Black History Month.

Such events include Pop Talks by the National Association for the Advancement of Colored People (NAACP), a community potluck, Multicultural Mondays and more. The Black Student Union also plans to showcase films with black main characters for the Collins Center for the Arts Kickin’ Flicks showings during the month, spotlighting “Southside With You” and “Moonlight” on Feb. 8 and Feb. 22, respectively. The Black Student Union meets weekly on Fridays at 3 p.m. in the Walker Room of the Memorial Union.