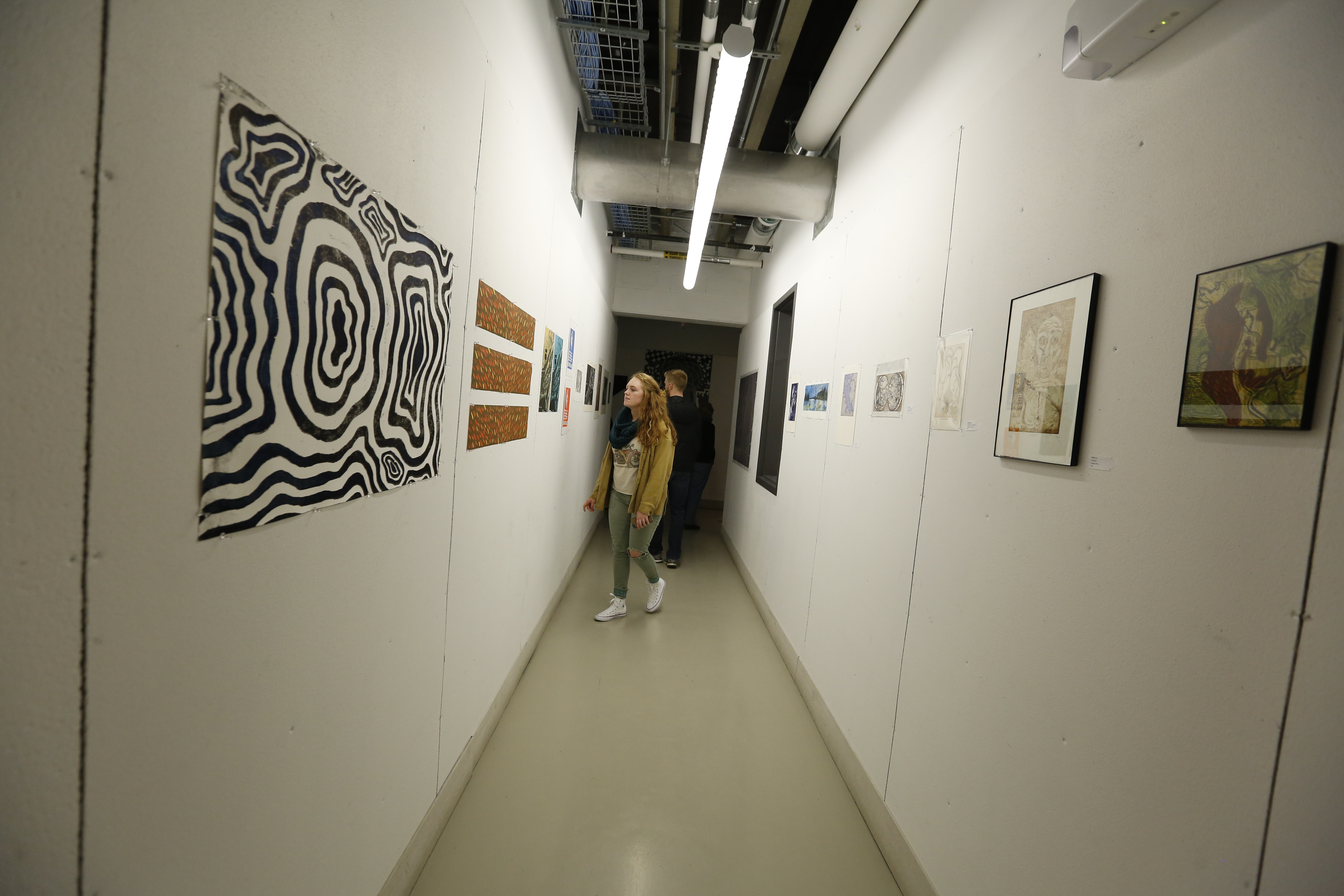 Last Wednesday, Feb. 22, University of Maine Art and Design Collective held its first Student Salon at the Innovative Media Research and Commercialization Center (IMRC). With 40 pieces on display, the IMRC hallways were flooded with art of different kinds.

The Art and Design Collective is a student-led art group at UMaine for people who like and enjoy making art. Non-art majors are welcome to join the group, where you can meet a community of artists, learn about more complicated art techniques and get critiqued on your work.

Many artists want an opportunity to showcase their art and the Student Salon gave that opportunity to UMaine students. There are two exhibitions at UMaine which display students’ work: the non-juried Senior Art Exhibition at the end of fall semester and a juried Student Art Exhibition at the end of spring semester. To present your work at those exhibitions, you have to meet certain requirements. The exhibitions display works of students in the department of art. For the senior art exhibition, you have to be a senior and take ART 499, which is the capstone course for all studio art students.

Submissions for the Student Salon were open to art and non-art majors. The Salon was not juried, which means that an artist’s work was not judged based on a certain criteria. Anyone could submit a maximum of two pieces of various art media. Last Wednesday, more than 50 people had the chance to experience mixed media, sculptures, drawings, paintings, prints, photographs and a five-minute massage by donation.

“The Salon gave students an experience of what it is like to get their work together to put in a show,” William Bann, one of the artists on display, said. Bann, a fourth-year philosophy student with double minors in studio art and mathematics, submitted two photographs to the show.

“The organization [of Student Salon] is the same if you were going to submit your work to the gallery,” Bann said. You have to get your work together in a certain amount of time. It’s a positive experience, for some of the younger students. Because it’s not juried, there is less pressure on students to try and force themselves to submit work that is academic.”

A total of 60 pieces were selected from more than 300 submissions for the 2016 annual Juried Student Art Exhibition. Last May, the art and design collective held its own exhibition displaying the pieces which were rejected from the student art exhibition, otherwise known as the Salon des Refusés. French for “exhibition of rejects,” Salon des Refusés refers to an art exhibition held in Paris, in 1863, to show paintings that had been rejected by the selection committee of the “Paris Salon” — the official annual showcase of French art.

Initially, the Student Salon was planned to be held at the black box in IMRC. Due to double-booking, the organizers of the show had to think on their feet and moved the exhibition to the corridors of IMRC.

“I think the show was more successful than it could have been if it was in the black box,” Jenya Damsky, vice president of the Art and Design Collective, said.

Indeed, being able to walk through hallways to view the art resembled the feeling of an actual professional gallery. Some did not know what to expect when they turned right, others were pleasantly surprised when they turned left. Having the movement of people in a maze-like space created a sense of discovery and curiosity, as well as some traffic.

“We now know that we need to space things out in the future and don’t put too many pieces on a narrow hallway to avoid traffic,” Damsky said.

“Every year it [Salon] is going to get better and better,” Hannah Hooke, president of the Art and Design Collective, said. Hooke shared that the she felt a great sense of accomplishment during the event.

“I felt proud and very relieved,” Hooke said. “All day I was super anxious that people won’t come and it’s just going to be us; but as soon as people started coming in and getting massages, I felt that sense of optimism, knowing that we could do this.”

“I see her working at home,” Costello, who is also Ogden’s roommate, said. “I saw bits of it and here I saw the final product.”

Costello shared that she did not regret coming to the Salon.

“I love the community feel here. It is so cool for students to see each other’s art and it’s also a great way to bring people together. Hopefully I can come to the next one,” Costello said.

The Art and Design Collective is planning to hold their second Salon des Refusés in May. From Feb. 27 to March 3, the group will host a henna tattoo fundraiser at the Memorial Union from 10 a.m. to 2 p.m. If you would like to join the Art and Design Collective, come to their meetings held in the printmaking studio at the IMRC on Thursdays at 6 p.m.