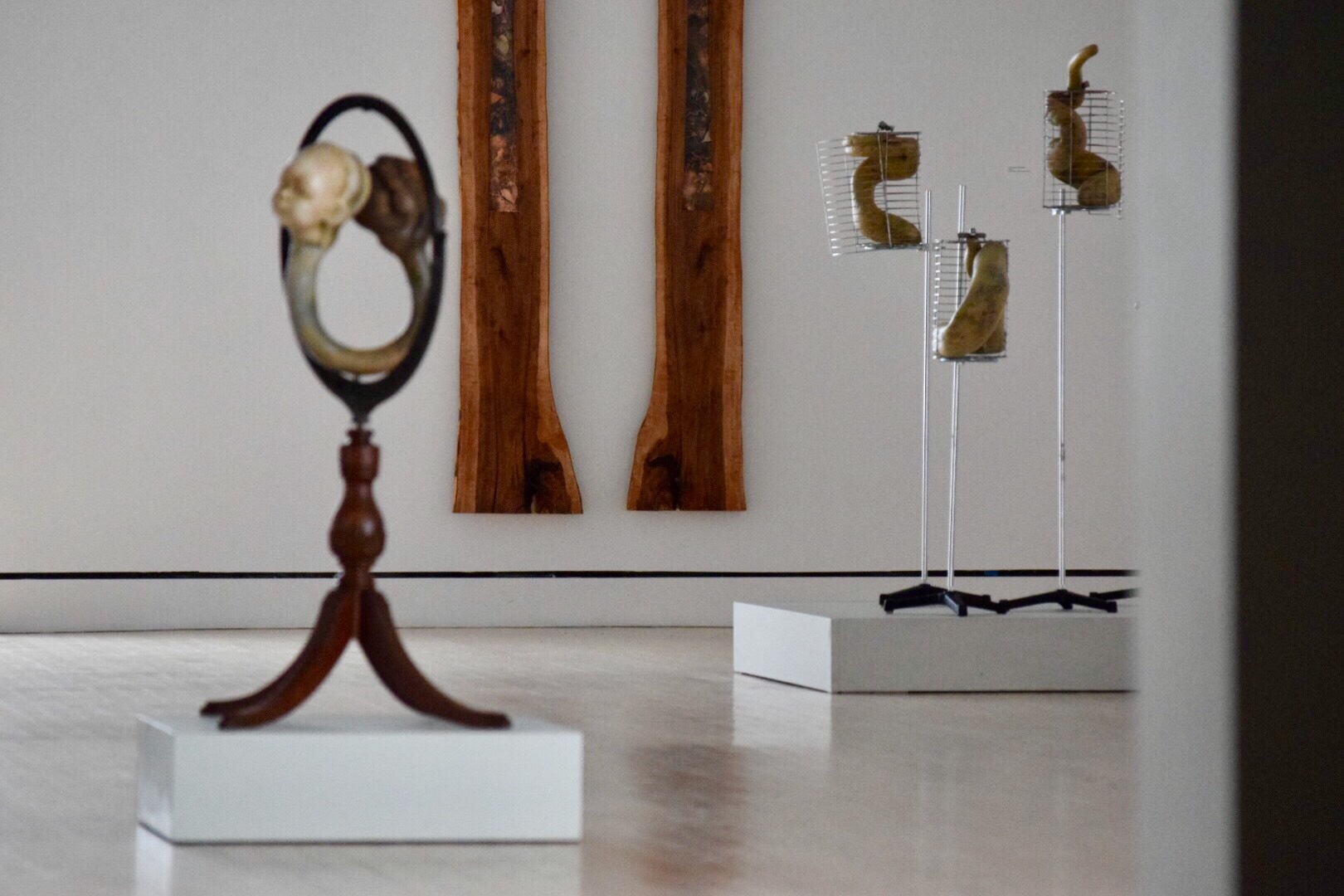 For any University of Maine students looking to escape from their hectic school life into the realm of art, the Lord Hall Gallery is currently featuring faculty artwork and is free of charge to the public. The exhibit features a mixture of full-time and adjunct professors and will continue through March 17. Often credited as an annual celebration of UMaine faculty work, each piece is the culmination of hours of time and effort coming to fruition for the event. Each year a mix of different professors is featured — and this year the seven professors are Constant Albertson, Susan Camp, Kerstin Engman, Wayne Hall, Samantha Jones, Andy Mauery and Matthew Smolinksy.

The curator of the event, Professor of Art Laurie Hicks, was especially excited for this batch of artwork to be displayed, as most of it “has a political concept behind it.” From politics to war to environmental concerns, all of the art has a message.

Some messages are evident by the piece’s title, like Constant Albertson’s Children of War. The ceramic frames each narrow in on specific humanitarian crises around the globe that affect children negatively. From the deaths of Michael Brown and Freddie Gray, to the Flint water crisis and the Gaza War, her pieces reflect messages of sorrow and mourning, but also justice and hope. Albertson explains how her pieces were initially influenced by her reaction to the Gaza War, but she expanded her horizons to cover all “the varying consequences to children across the world,” specifically in places of war and conflict.

In addition to the varying messages portrayed through the artwork, all of the art this year has a three-dimensional element to it. Bold sculptures and woodworking pieces are some staples of the exhibit, but even something as simple as using shadow boxes to frame pictures of Orono and Old Town creates a different way for viewers to interact with each piece visually.

Each faculty member featured gets to choose what to display and how to display it and Hicks explains how the artists “pull from their experiences,” taking into account “events on the social and cultural levels.” Artists are really responding to the sociopolitical climate that this new year has ushered in, and are incorporating “contemporary concerns from this world,” as Hicks explains, into each piece.

“Letting go of having a predetermined plan…sometimes your hands know more than your mind…” Adjunct Professor of Art Samantha Jones said in advice to others. “[creating art] is a magic thing that sometimes happens outside of my mind.”

She has two pieces featured in the exhibit, one of which is prominently displayed and could catch anyone’s eye as soon as they walk in. Featuring bronze poured vaginas hanging from chains reaching from the ceiling to the floor, Jones explains that this piece deals with the topic of the femme. Her inspiration came from her time in Rome where many of the artwork touched upon divine femininity — and that she had this specific piece in the works for quite some time.

The exhibit has already garnered attention from the local art community —both on campus and off — and the exhibit will usually average between 300 to 400 visitors over the course of its time there. You can find the exhibit in the Lord Hall Gallery for the next few weeks. A student exhibition will take the place of the current faculty one in late March and will remain featured for a few weeks after.