A Black Bear Abroad: Where food is essential, Chileans graze with mayonnaise 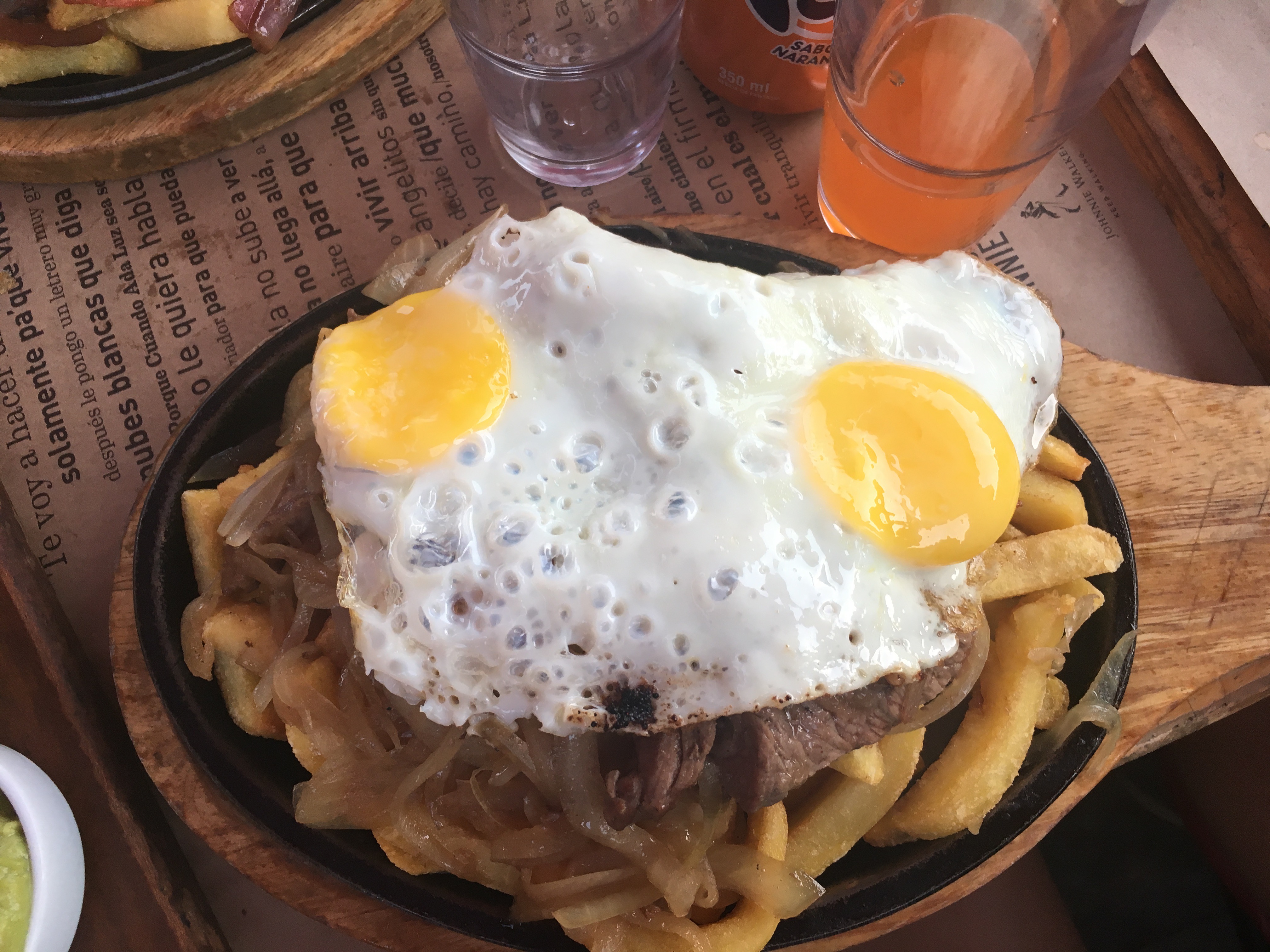 When studying abroad, one of the most diverse, but interesting aspects of the culture is the food and how the locals eat it. Here in Chile, this is no different.

Unlike much of Latin America, Chile’s food is not super spicy. Instead, mayonnaise is eaten with almost everything; a mayo-haters worst nightmare. One of the most popular foods here in Santiago is a “completo” —which is a hot dog topped with mayonnaise, avocado, tomato and sauerkraut. It is sold all over the city, on the streets and in restaurants. I have never been a huge fan of mayonnaise, so I have yet to try one, but many people here swear by them.

My personal favorite Chilean food are chorillanas. These can be prepared many different ways, but the traditional preparation is french fries with a fried egg, sliced beef, onion and occasionally chorizos. It’s more of an appetizer-type food, meant to be shared with a group of people, but I could probably eat an entire one by myself. It is surprising that these are so good, because french fries in general are not as good in Chile as in the U.S.

Two traditional Latin American foods that Chile does have are sopapillas and empanadas. Empanadas can either be fried or baked in an oven and stuffed are most popular as pino (ground beef, onion and an olive), but you can find all different flavors from cheese to chicken to mushrooms, really whatever the person selling them wants to put in them. Sopapillas aren’t as popular here, but some people sell them on the street and they can be used like bread on a sandwich or eaten alone.

Another aspect of the food that is different here is how they eat the food and the culture surrounding the food. Here, even if you are eating pizza, you are expected to use a fork and a knife. Their table manners are very good and when you are at a restaurant you can expect to get weird looks if you are eating with your fingers. Street food is the one exception to this rule, most likely because you usually end up eating it outside, making it socially acceptable to eat sandwiches or empanadas outside without silverware.

People here do not eat on the go, though. One of my first mornings here in Santiago, I was running late and decided to take my cereal with me. As I was eating my Frosted Flakes out of my cup on the bus I noticed I was getting a lot of weird looks. I asked my host mom about it and she was shocked that I had brought my cereal with me, in a cup, on the bus. Here, they do not do that. Meals are eaten at home or sitting at a table or somewhere that is not public transportation.

This lack of eating on the go all stems back to the culture around consuming food here. Similar to Europe, in Chile they eat dinner pretty late in the night. My host family usually eats around 8 or 9. What many families do to avoid getting hungry in between lunch and dinner is serve “once.” Once is similar to tea time, where the family gets together and has a snack — usually a baked good of some kind — and drinks soda or tea. In many families they sit and talk for so long that it leads into dinner, where they continue to socialize. Many times, meals can last hours because families will sit around the table talking for hours after they finish eating.

This being said, every family here is different — just like in the U.S. — and many families come from different countries with different traditions and different backgrounds. My host family here is from Argentina, so along with being very fond of barbecues, they are also frequently drink “mate.”

Mate is a drink similar to tea that you pour hot water into and drink with loose leaves floating around. The straw you use has slits so that the leaves don’t get into your mouth, but you just keep pouring more hot water in while you drink it, when the water runs out. Mate is a communal thing, shared within family and friends. If you are with a group of people in the afternoon, it would not be uncommon to pass around a mate cup, with everyone drinking out of the same cup, sharing the drink and socializing. It is a relaxing social drink that often takes the place of once at my house.

If you were to travel to a different part of Chile or Latin America, the foods you would experience would be significantly different. When I went to the coast, seafood was far more popular and when I travel to different parts, I am sure that different foods will be popular there. What defines the area, I believe, is not just the food, but the culture surrounding the food.

Grad Fair garners reactions of excitement and nervousness
From singlets to scrubs: how one UMaine student refuses to lose