From singlets to scrubs: how one UMaine student refuses to lose 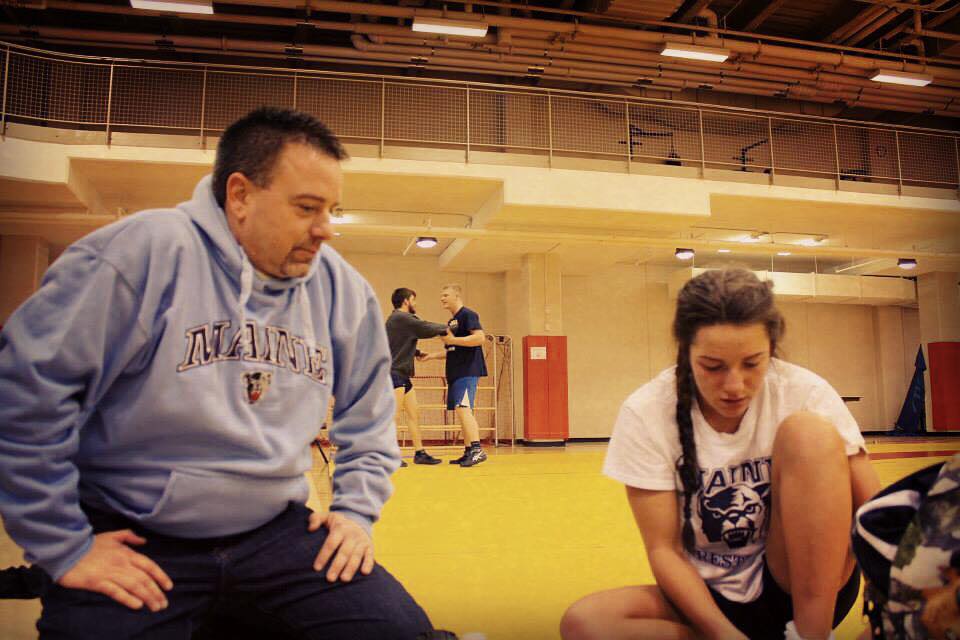 When Samantha Frank first decided that she wanted to be a nurse, she was two.

“My grandfather was in and out of the hospital with cancer,” Frank said. “All the nurses were running around taking care of him, and I realized I wanted to take care of people like my grandfather.”

After 18 years, Frank’s goal of becoming a nurse hasn’t changed. The University of Maine nursing student is currently doing her clinicals on the surgical floor of St. Joseph Hospital. In addition to being a Dean’s List student, Frank, who is a resident assistant (RA), works 5-7 hour-long duty shifts and maintains a positive atmosphere in her community. Frank does it all while being a three-time national wrestling champion.

“Juggling academics and athletics at the same time on the college level is very difficult, and the fact that Sam has excelled in both areas is incredibly impressive,” Frank’s wrestling coach Don McCann said.

Frank won her third consecutive individual title earlier this month at the 20th National Collegiate Wrestling Association championships held in Allen, Texas. She was named the meet’s outstanding wrestler for the third year in a row.

Frank began wrestling in 7th grade. She initially wanted to play football, but her father Ed didn’t allow that because of the significant size difference. Instead, he suggested wrestling, where groups are divided by weight.

All throughout middle school and high school, Frank wrestled against boys. Some people questioned her size and ability to wrestle on boys teams.

Despite earning numerous scholarships for wrestling from colleges in Canada and on the West Coast, Frank enrolled at UMaine, determined to pursue a nursing degree.

“When I came to accepted student day, as soon as I stepped out of the car, I was overwhelmed with how welcomed and wanted I felt here,” Frank said. “I liked the way it was so diverse in so many different ways, but also enough to feel my personality would be wanted here. I knew I could find more of myself here.”

“I am very goal-oriented, and my goal is to be a nurse, not a wrestler,” Frank said.

She learned about UMaine Wrestling at the beginning of her freshman year at the organization fair. A few months later, Frank won her first national wrestling championship. That same year, Frank tried out for the 2016 U.S. Olympic Wrestling Team. Although she was asked to train with the Olympic team in the Philippines, Frank turned it down.

“Maine is home,” Frank said. “The closer I am to home the happier I feel.”

Frank shared that her father is her biggest fan.

“He hasn’t missed a single match,” Frank said. “My parents never pressured me, they just wanted me to take advantage of every opportunity and try my hardest. That usually results in a win.”

Since wrestling is an individual sport, if you lose, it’s on you. Because of this sport, Frank learned self-control, discipline and confidence. Wrestling has shaped Frank’s character and she applies the traits she learned from this sport in whatever she undertakes, including her RA job.

“It definitely takes balance and the same type of interpersonal and personal skills to be able to communicate, and find it within yourself to do the right thing in difficult situations,” Frank said. “In wrestling, you’re not trying to hurt your opponent. As an RA, you do everything it takes to maintain your residents’ safety.”

“Sam [Frank] is a very talented wrestler, but one of the main things that sets her apart is her determination. She sets very high goals for herself and works very hard to accomplish them,” coach McCann said.

Indeed, Frank has a long list of goals to accomplish as soon as she wakes up.

On the day I spoke to Frank, she took an 8 a.m. exam after being on duty until 11 p.m. the night before. After taking her exam, Frank finished and turned in her clinical research paper, searched for apartments for next year, went to the gym and made a bulletin board for her residents.

“I try to be efficient,” Frank said. After the interview, Frank went to Texas Roadhouse, eager to eat a meal accompanied by a lot of bread. While training for the championship, she had to cut bread out of her diet and substitute it with rice cakes.

After dinner and a two-hour staff meeting, Frank got a well deserved night’s sleep to wake up at 6.30 a.m. the next day. Frank also volunteers her time to working with youth wrestlers in the community.

Like many of us in college, Frank gets exhausted and burned out from time to time.

“Monday is my ‘stressed out’ day,” Frank said. “It’s when I realize how much I have going on. But, I’m only on Monday. I try to take one day at a time.”

Her advice for first-years is not to waste time.

“Experience what you can while you have it and don’t hold back from going to different classes, going to hockey games, seeing things, and using all the resources we have,” Frank said. “You’re here for school, you’re here to be a student. So don’t get too caught up in everything. It’s good to do things and see things, but remember that you have one goal.”

Looking back on her sophomore and freshman years, there aren’t things that Frank regrets not doing. “I pretty much go after everything I want. I’d say I lived it up pretty well,” Frank said.

In five years, Frank sees herself working as a nurse in Maine.

“In my very first clinical, I had a patient who was 101-years-old. She always said thank you, told me how sweet I was, and truly enjoyed my company. We connected. It is people like her who keep me going,” Frank said.

“When I was two-years-old, I was looking up to the nurses who took care of my grandfather, and maybe someday, someone will look up to me.”

A Black Bear Abroad: Where food is essential, Chileans graze with mayonnaise
Album Review: Zara Larsson should be feeling “So Good” about her latest album release