“Can We Really Coexist?” panel answers questions and poses more 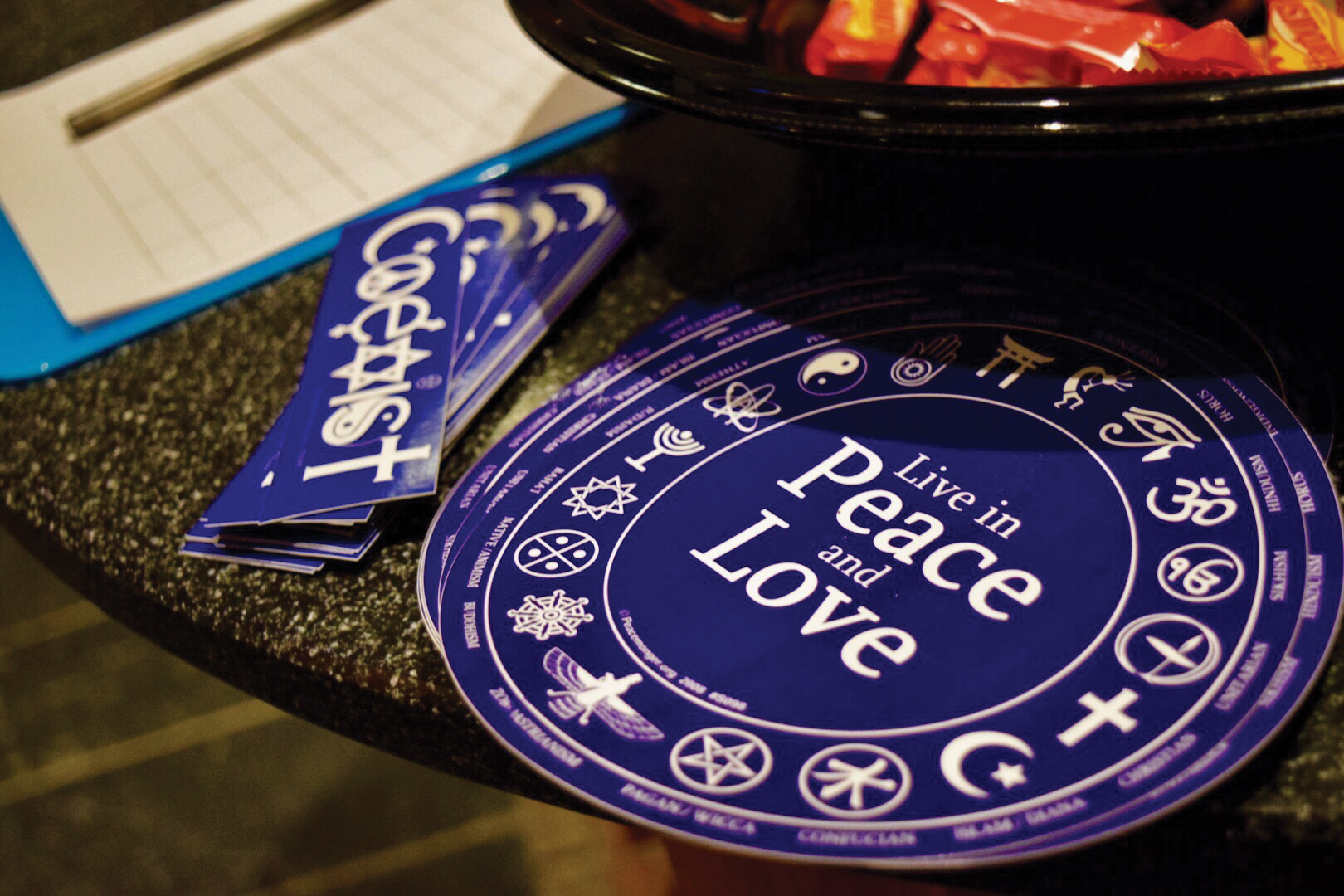 If you were to Google “coexist” today the search engine would typically finish your query with “bumper sticker.” But for those whose minds long for deeper answers, unique perspectives and respectful dialogue, last Wednesday’s “Can We Really Coexist?” panel, a multi-faith discussion, was the place to go to find answers.

Over 200 students, community members and faculty packed into Nutting 100 to listen and learn about different perspective on coexisting. The Wilson Center for Spiritual Exploration and Multi-faith Dialogue coordinated the event as part of the University of Maine’s Diversity Week line-up—and invited a variety of co-sponsors to contribute, including the Spiritual Coexistence Student Group, UMaine Office of Multicultural Student Life, UMaine Navigators, UMaine Intervarsity, Cru UMaine, Life, Muslim Student Association, UMaine Hillel, Black Bear Catholic at the Newman Center, The Wabanaki Center, The Islamic Center of Maine and The Freedom From Religion Foundation. Many groups had tables set up in the atrium outside the hall to offer more information to interested parties.

The panel began at 7 p.m. and seats filled up fast, with many viewers lining the aisles and back walls to hear what the panelists had to say. The panelists were chosen to represent seven different religion or spirituality background—including Omar Conteh for Islam, Hugh Curran for Buddhism, Tracy Guerrette for Catholicism, Rabbi Darah Lerner for Judaism, John Bear Mitchell for Wabanaki spirituality, Tom Waddell for atheism/humanism, Aaron Watt for evangelical Christianity and Linda Silka as a moderator. Pamphlets were offered at the door to provide biographies for each panelists and moderator.

Silka, a social and community psychologist, began with an intro duction to the event and thanked the audience for showing up and proving the desire to coexist does exist. The first question she posed was difficult in it’s simplicity; “do you feel like the world is doing a good job of coexisting?”

Waddell was the first to respond and began by describing an atheist perspective on life as one that “exemplifies coexistence.” Waddell is the President of the Maine Chapter of the national organization Freedom From Religion Foundation (FFRF Maine), which “supports the Constitutional principle of the separation of church and state,” something he noted in his response as being a fundamental part of coexisting and is in more danger than ever because of the policies of the current “so-called” President.

Watt and Guerrette, representing Evangelical Christianity and Catholicism respectively, gave the general responses that our world was successfully coexisting. Guerrette harped on the Catholic principle to love thy neighbor, saying “we are made by love for love, to give and receive love” and she feels like the healthy dialogue that was evidently being created at the moment proved that love was there.

Others were not as convinced, as Rabbi Darah pointed out, “If it were all sunshine and roses then we wouldn’t be here.” She continued by saying that, “The Jewish population has experienced the best and the worst of coexisting,” citing the Holocaust as evidence of the latter.

The next speaker echoed the feeling of experiencing the worst of coexisting. John Bear Mitchell, a citizen of the Penobscot Nation from Indian Island, responded to the question posed with a resounding :no.”

“When you come here, you are walking on the bones and the dust of my ancestors who have been here for thousands of years,” he began — and “our government dictates certain religions and promotes certain religions.” Mitchell explained that Native Americans do not consider themselves religious, but instead spiritual with a lot of ancestor worship. This has historically garnered negative reactions from the American government as they steal and desecrate Native American’s land, which is especially hard to tolerate by John Bear because of their “great connection to the land.” Regardless, he remains optimistic about Native American’s futures, saying, “we’re still here, we’re still smiling.”

Conteh responded next for the Islamic faith, mentioning how Islam is a religion that in today’s sociopolitical environment is “constantly under a microscope.” Conteh explained that Islam believes free will to be sacred—and something that should be respected in every individual, saying, “free will is sacred as the soul of that person is sacred.” While those practicing the Islamic faith may feel negative responses to their beliefs from their communities, Conteh stressed the importance of striving for coexistence rooted in understanding. “It takes intention, it takes trust, it takes deliberate effort for human beings to try and understand each other.”

Curran discussed the fundamentals of coexisting in his response, saying coexistence is the idea of “blending spiritual traditions and finding the common features.” He discussed his travels around the world to places like Ireland, Nova Scotia, India and Japan that helped him understand what it’s like to live amongst people so different than oneself.

Following the first round of questions came two more from Silka — “To what extent does ideal coexistence require compromise in beliefs?” and “What do we do when people have such passion[ate] disagreement?” The responses ranged and touched upon current hot button issues like abortion, immigration and transgender bathroom policies. For those interested, the Wilson Center will be providing a full-length recording of the two-hour long panel.

As the panel progressed viewers were encouraged to write down any questions that arose on pen and paper, which were then sorted by Wilson Center faculty and three were eventually posed to the panel.

The first viewer question had to do with how each religion perceived and interacted with nature, to which John Bear Mitchell responded that protecting Mother Nature is paramount. Rabbi Darah mentioned that putting stock into scientific facts, including accepting concepts like evolution, will lead to better understanding.

The next viewer question posed how does one move from intentions to action, or how does one “operationalize ‘love thy neighbor’?” Rabbi Darah explained her intentions to “celebrate with pride,” Curran said to “engage in the world with love and kindness” and Waddell responded, “elect representative that are statesmen, not politicians.” He also listed actions such as supporting rank-choice voting and abolishing the Electoral College (“and it can be done,” he says).

Finally, the panelists were asked to respond in a few words about “what it means to be a decent human being.” Curran said, “being aware of yourself, focusing on deeper truths,” Conteh replied, “care and put that care into practice and not just words,” Waddell responded “when you meet people, think the best of them,” and Guerrette reminded the audience to “selflessly love others.”

The panel was created to pose important, provocative and complex questions. Does coexisting require compromising our own beliefs? Can there be tolerance of a belief system without endorsement? Does coexistence allow one to claim that their beliefs are exclusively true? While the audience might not have left with a clear-cut yes or no, they definitely exposed themselves to different perspectives on multi-faith coexistence and that in itself is a step forward. To quote John Bear Mitchell, “when you peel away the skin we’re all just as gross.”