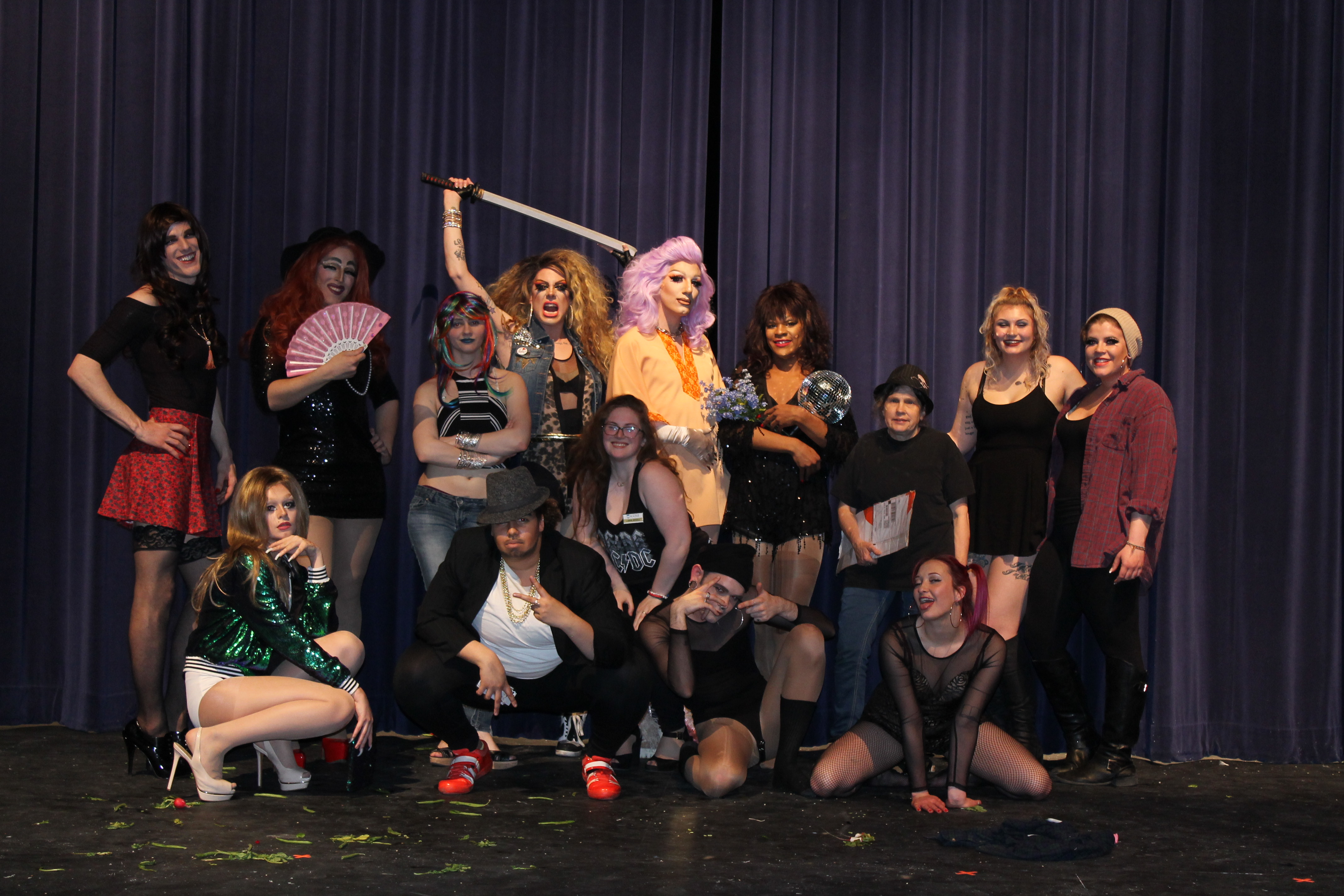 If you were passing by the Memorial Union last Saturday night, you might have heard screams. No need to worry, because those were the screams of cheer and laughter coming from the audience at Hauck Auditorium where the Drag Show was being held.

All of last week, the Lesbian, Gay, Bisexual, Transgender and Queer (LGBTQ) services was proudly celebrating Pride Week with the University of Maine community. The 13th Annual Pride Week Drag Show finished off the week with a bang.

“We’ve been planning for the Drag Show pretty much since I got here,” Crissi Dalfonso said. It is her first year as a graduate assistant for LGBTQ Services. Dalfonso’s favorite part of organizing the drag show was the rehearsal night.

“Student performers blew me away,” Dalfonso said. “When they all came on stage, that was the magic moment.”

Eleven performers, including the hosts of the evening Cherry Lemonade and Step Mother, brought unforgettable drag to a full-house crowd. The performers danced and lip-synced to numerous popular songs, including Ariana Grande’s “Side to Side” and a 1992 hit “Baby Got Back” by Sir Mix-a-Lot.

A half-hour before the show, there was a line outside the Hauck Auditorium that spanned toward the exit of the Memorial Union. The seats were filled in no time, with several people having to enjoy the show on their feet. In fact, it might have been to their advantage, since they had a chance to bust some moves to the upbeat tunes.

The audience roared as the hosts Cherry Lemonade and Step Mother first stepped on stage. The drag queens instantly blinded the guests with their golden dresses and effortless wit. The level of confidence and sass that the duo beamed was contagious. From the minute the show started, the people in the audience switched off their daily worries and were present in the moment.

Every performer had something of their own to offer. The first drag queen — redheaded Miss Pumpkin, dazzled the crowd with a sultry yet elegant performance. Special Kay stunned the crowd with her impressive ability to dance in six-inch heels. The Emmitt Show delivered a spectacular performance of Whitney Houston’s “I Will Always Love You.” She started the performance by portraying the fragile, vulnerable side of Whitney and then burst out to up-tempo dance routine, demonstrating her flexibility through splits, cartwheels and jazz pirouettes. The people in the audience couldn’t keep their eyes off of her, she had the full attention of the crowd. The Emmitt Show was chosen as the winner of the night through a screaming contest from the audience. It was her first time performing in full drag. She attended last year’s drag show and was pulled out from the crowd by the host Mimi Imfurst.

“She had me lip-sync for my life to Beyonce and Jay Z’s “Crazy in Love,” The Emmitt Show said. “Blood was rushing through my face, I’ve never felt so much adrenaline. At that moment, I knew what my calling and my career should really be.”

Her performance was received by rhythmic claps, which only made The Emmitt Show perform better. After getting standing ovations, The Emmitt Show shared in an interview that she felt loved and accepted by the audience.

“I just felt so exuberant and wonderful, it was fantastic. Being who I am, coming from a small town, it’s just really nice to feel the love and be fully accepted by your peers,” the Emmitt Show said.

Milky the Cow performed in a cow costume to Gwen Stefani’s 2004 hit “Hollaback Girl.” As the part with “It’s bananas” came on, the UMaine mascot Bananas T. Bear joined her on stage.

During the intermission, I had a chance to go backstage and see the hosts Cherry Lemonade and Step Mother in their natural element, touching up their make-up, reapplying the nail glue and strapping up their heels. As I talked to them, it struck me how genuine, humble and down-to-earth they both were. It is so easy to forget that any performer has a separate persona on and off-stage.

There are several traditions that the duo does, every time before they go on stage.

“We have enough Red Bull to make a toddler fly and then we look at each other and scream into each other’s mouths,” Step Mother said, as they demonstrated the ritual. The drag queens have been working together for over four years.

“We work so well together, we just like each other,” Cherry Lemonade said, as she fixed her wig. “My favorite part of doing drag is getting as close to a female form without actually having one. The illusion is part of the fun for me, and we both are obsessed with make-up.”

When asked about the importance of having events like this at universities, Cherry Lemonade replied, “Some kids might have come from an area where they never had this type of influence. It’s good that they are able to see something like this among a group of people who are all accepting.”

After the show, second-year student Trinity Jacques shared that she is thinking of participating in next year’s drag show. “It definitely spiked my interest in drag and I want to try being a drag king, I already have a theme and an outfit in mind,” Jacques said.

All throughout the show, Cherry Lemonade and Step Mother gave their all to the crowd. They joked, they sang, they danced, they twirled. Most importantly, they radiated something truly beautiful — freedom. Freedom to be somebody else, freedom to be themselves.