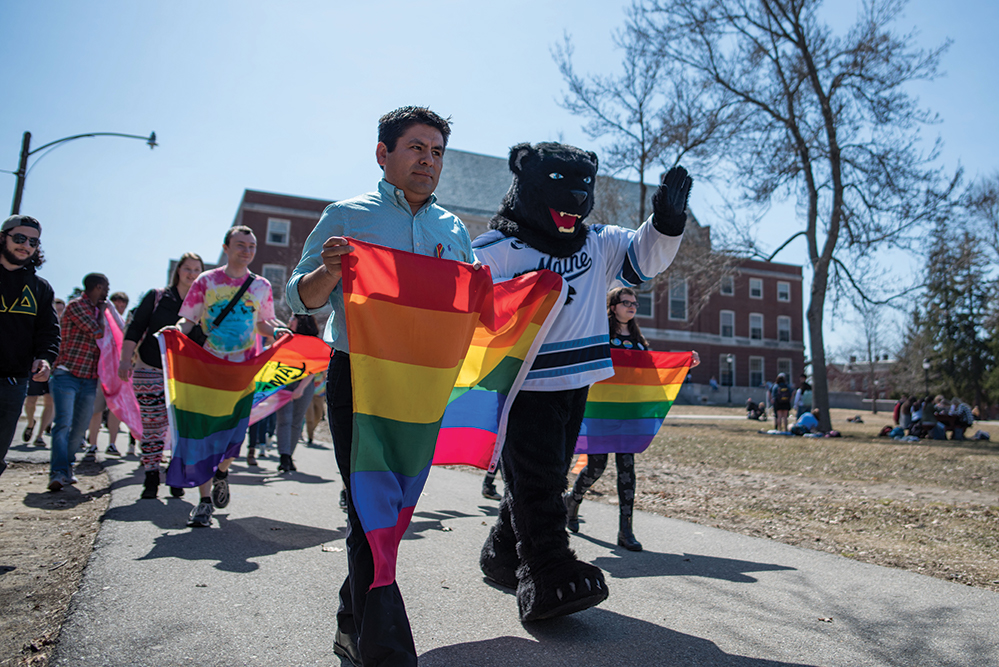 Last Monday, April 10, the sunny skies and warm breeze slowly brought about a blossoming of activity on campus. Students filled the university Mall to celebrate surviving another Maine winter and scarfs and boots were replaced with sunglasses and sandals. But around noon that day, a different sort of celebration was brewing.

Rainbow-clad students gathered around the flagpole in support of the University of Maine’s annual Pride Week celebration, with a flag raising ceremony to kick it off. As the bright and bold rainbow flag was hoisted among the clear blue sky, cheers and applause from the crowd fostered an environment of support and acceptance for students of all gender identities and sexual orientations.

Pride Week, although typically celebrated in June by cities across the United States, was planned at UMaine for the week of April 10 to accommodate students’ summer schedules. This year’s Pride celebration was by far the biggest and best yet, with over 20 events jam-packed throughout the week, culminating in the 13th annual Drag Show on Saturday, April 15.

The support and student engagement in Pride Week has only grown over the years and this year was proof of that. Michelle Thomas is a student worker at the Rainbow Resource Center, which is the LGBTQ Services office and the hub of all the commotion of Pride Week. Thomas remembers trying to get into the Drag Show two years ago, when it was being hosted at the Class of 1944 Hall on campus, but was turned away for lack of seating. This year the coordinators hope to avoid that misfortune and have upgraded the Drag Show to the Hauck Auditorium due to popular demand. Many events scheduled for Pride Week saw an outpouring of interest from students, which Thomas regards as encouraging feedback.

The flag raising ceremony was followed by a short march around the mall — and many students could be seen sporting rainbow tie-dye pride shirts and buttons with preferred pronouns. Rachael Baker, a first-year Wildlife Ecology student, attended the flag raising and was encouraged by the turnout, saying, “I think it sheds color on our campus, and it’s nice that everyone is showing pride in who they are.”

Directly following the flag raising and march a Pride Carnival was held from 1 to 4 p.m. in the North Pod, with a subsequent “What You Didn’t Learn in Sex Ed” educational talk at 4:30 p.m. in the Coe Room. The talk consisted of curious students anonymously asking questions of a sexual nature to Sam Saucier, the president of the Student Alliance for Sexual Health (SASH). The event hoped to provide a platform for LGBTQ students to confidentially get answers about sex without the associated stigma or shame.

On Thursday, April 13, the Rainbow Resource Center (RRC) played host to an LGBTea Party, a bi-monthly event that offers a safe space to discuss issues facing the LGBTQ community as well as honoring the history of LGBTQ struggles. The topic of the Stonewall Riots was the center of discussion, as some students were unaware of how Pride Week’s origins were birthed. Many students expressed their beliefs surrounding gender as a social construct and how drag is an exaggerated performance of gender.

For students looking for a Pride Week event that’s just pure fun, the RRC offered a rainbow bear-stuffing event on Friday. This event in particular spotlights the growing popularity of Pride Week, as tons of students clamored for materials to stuff their own bears.

Pride Week is a culmination of continuing efforts by the RRC staff and a community of allies who work to make sure UMaine is a place of welcoming for all. Jules Hathaway, a friendly face around UMaine for years, commented on the environment on campus, saying, “I see a lot of excitement, a lot of embracing multiple identities. The student body is eager to learn when there are events like the Drag Show or Coming Out Week, people get excited and I see a lot of buttons and support.” Hathaway commented on the luck that the flag raising occurred on Accepted Students Day, noting that it sends a nice message to incoming students.

For any interested parties who want to continue seeking support for the LGBTQ community, Wilde Stein holds weekly meetings on Thursdays at 7 p.m. in the Walker Room of the Union.