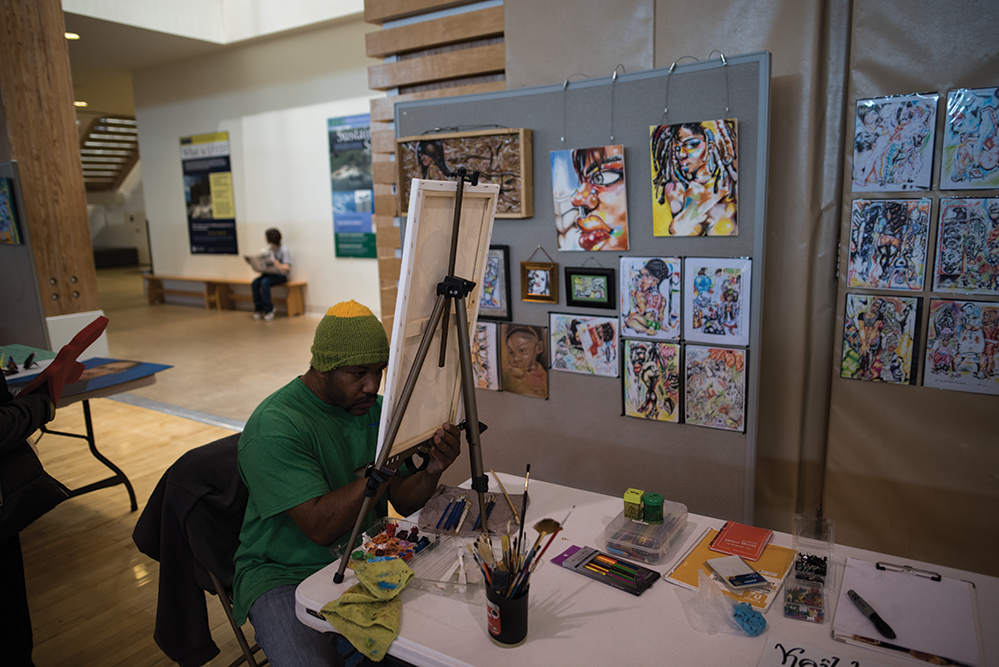 Coordinated by the Peace and Justice Center of Eastern Maine, the festival brought together 66 local organizations. Among them were Spruce Run — Womancare Alliance, Penobscot Young Democrats, Wabanaki Marketplace, as well as several UMaine student groups such as Engineers Without Borders, UMaine Nursing International, Divest UMaine and more. Peace, environmentalism, social justice and acceptance were the central topics of the festival.

WERU-FM Community Radio based in Blue Hill, Maine was tabling at the festival for the second year in a row. Charlie and Pat Pugh shared the history of the radio station that was on air since 1988. Now, the station is run by 70 radio host volunteers, with more than than 200 people behind the scenes.

“People come by to say ‘Hi’ and give thumbs up,” Charlie Pugh shared.

Anna Fischer, second-year marine science student said, “I was really impressed by how well different booths were put together, and how much time everybody was able to put in to create their displays.” It was her first time attending a HOPE festival. “There are so many different diverse groups there, and all of them recognize how important hope is for their organizations and for what they stand for,” Fischer said. “I am definitely coming back next year.”

Third-year UMaine student Adya Plourde was tabling for UMaine chapter of Best Buddies, which she is the president of. Best Buddies at UMaine pairs people with intellectual and developmental disabilities in one-to-one friendships with college students.

“It’s nice to be surrounded by people who have progressive ideals on the foundation of inclusion and prosperity,” Plourde said. “It’s an upbeat kind environment. I had a lot of really nice interactions with people I never met and with kids.”

College students who attended the event got to experience a rarity: seeing children. A lot of them. In fact, there was a whole section dedicated to children with games, circus performances, face-painting and more.

The visitors were greeted by colorful origami cranes that were hung along the rails of running tracks.

The food court offered a variety of homemade, fairtrade and locally sourced food, such as coffee, ice cream, baked goods and more.

At the heart of the Rec Center, past the tables, rows of black and white tapestries were laid out for passersby to paint. Gradually, the tapestries transformed as more and more people added color to them.

“I feel like it’s my community,” François Amar, Dean of the Honors College said. He is a member of several organizations that were present at the HOPE festival, including National Association for the Advancement of Colored People (NAACP). Amar shared that he has been coming to HOPE Festival for many years and was among those tabling in the past.

Mariana Orias from the College of Atlantic designed one of the prints for the tapestry. Her design depicted Pachamama, a goddess of fertility in Inca mythology. People believe that Pachamama, also known as Mother Nature, uses her powers to sustain life on earth.

Many in South America believe that when people take too much from nature, Pachamama punishes people by causing earthquakes.

“I didn’t know what to draw. When I was told that the whole idea behind festival is peace, justice and environment, I thought of Pachamama. She has the power to sustain life on this earth,” Orias said.

“My favorite part of HOPE Festival is celebrating all of the good work that different groups and individuals are doing,” Allen said. “There is a lot of positive energy here. Often when we have programs [regarding peace and justice] we talk about horrible things, such as racism, war conflicts, hate, and that — we have to deal with.”

“One often gets discouraged,” Allen said. “Today, you come together here where there are all these people doing all this good work on the environment, human rights and health care. It gives you encouragement to celebrate all this positive energy. It is a way of appreciating how many people we have in our community who are caring and really do good work. It’s hopeful.”