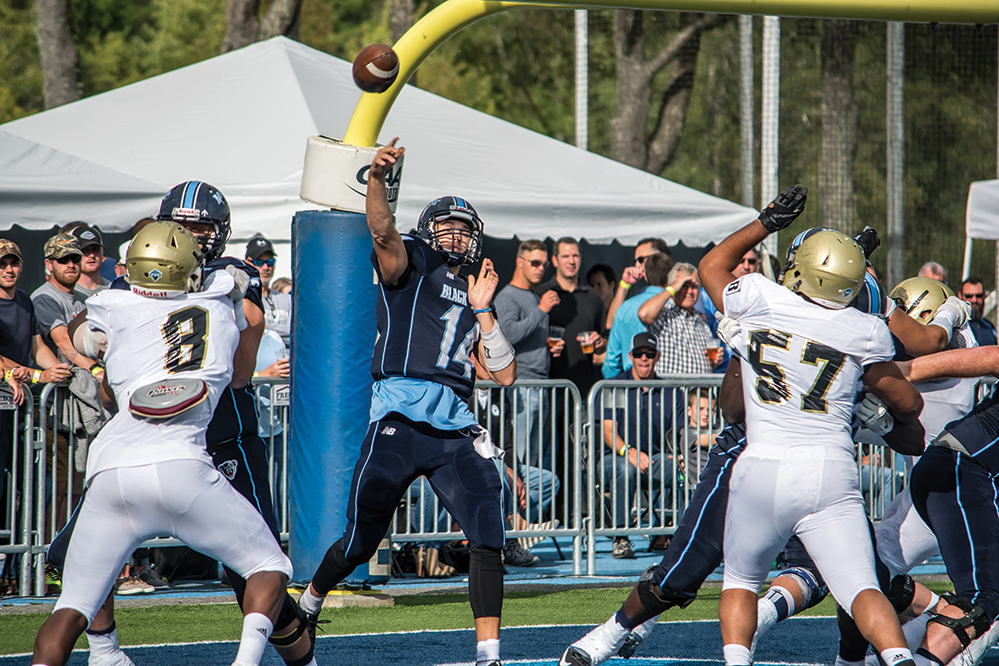 The University of Maine Black Bears (1-1) opened up at home in a big way Saturday afternoon, led by second-year running back Josh Mack’s 276 all purpose yards and a defense that intercepted Bryant University (1-1) third-year quarterback Price Wilson five times, including two that were returned for touchdowns as the Black Bears steam rolled the Bulldogs 60-12.

It all started in the first quarter for Maine thanks to second-year wide receiver Ernest Edwards, who caught two touchdown passes from redshirt first-year quarterback Chris Ferguson. On the opening drive, Edwards caught a pass from Ferguson and dove in for the score, bringing the score to 7-0. It would be Ferguson to Edwards from 31 yards out on a circus catch to run the score to 14-0.  Maine had a 14-3 lead at the end of the first quarter with no intention of letting up.

The Black Bears came out on fire in the second quarter, scoring 29 points to put the game out of reach. Mack, who totaled 151 yards and 3 touchdowns in what was a comeback win against the Bulldogs a season ago took it upon himself to get the job done again this season as he turned the corner for a 66-yard house call to start the second quarter.

“I just saw green grass in front of me you know, trusted my line in front of me, Jamil [Demby], the rest of them, I was patient and let my blocks develop and hit the hole that opened up,” Mack said.

Mack added another 60-yard touchdown with 3:57 left in the second quarter to put the Black Bears up 43-5 before the halftime mark. Mack finished the game with 255 rush yards and 3 touchdowns, becoming the first Black Bear to top the 200-yard mark on the ground since Marcus Williams posted 246 rush yards in 2003. Redshirt second-year running back Joe Fitzpatrick also contributed in the run game with 103 yards on the day.

The Maine offensive line dominated the game by not giving the Bulldogs an inch as Ferguson, who had an impressive debut against the University of New Hampshire, continued his success at home. The line didn’t concede a sack and allowed the young quarterback to throw for 150 yards and 3 touchdowns while going 8-17 on the day.

The offense wasn’t the only side of the ball that impressed Saturday. The defense that’s known as “The Black Hole” didn’t let Bryant get comfortable. Right after a 66-yard TD from Mack, redshirt third-year safety Darrius Hart made some noise with a 35-yard pick six, one of two interceptions returned for touchdowns. Hart and third-year linebacker Sinmisola Demuren each returned an interception for a score as the Black Bears racked up eight takeaways with five interceptions and three fumble recoveries.

Maine will enjoy this bounce back win but heading into the bye week Head Coach Joe Harasymiak made it clear this team is not done impressing us yet.

“I truly believe we’re a good football team but good means .500, we’re trying to change that around here. It’s been a goal of ours to be great that’s why these guys are saying that. It’s kind of become maybe a little bit of a slogan so far you know? We want to be great. We’re tired of being good and we’re tired of being .500,” Harasymiak said.

The program hasn’t seen the playoffs since 2013, but this team has fans excited. Many believe the loss to UNH should have been a Maine win and with this 60-point explosion Black Bear Nation is buying in.

Maine will have a bye week before traveling to take on defending Football Championship Subdivision National Champions James Madison on Sept. 23 for a 1:30 p.m. kick off in Harrisonburg, Va. Bryant will return home next week to take on the Brown Bears at 12:30 on Saturday, Sept. 16.