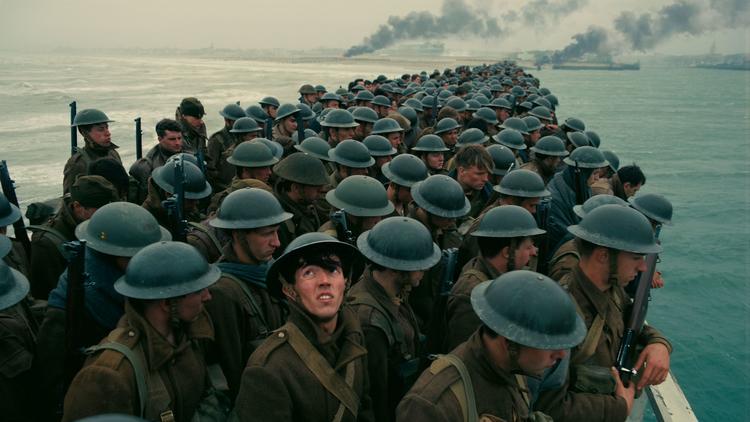 A scene from the film "Dunkirk." Credits: Warner Bros. Pictures.

A small group of soldiers wander through the streets of Dunkirk, France, surrounded by falling leaflets. One of the soldiers grabs one out of the air. It reads, “We surround you,” with a stylized map of the coastline showing the German blockade. As the soldiers pause to look up at the paper filled sky, a shot cracks through the stillness.

The attitude of Christopher Nolan’s newest film “Dunkirk” has been set. The next two hours are punctuated by tenuous calms and visceral bursts of warfare.
There are three interlaced narratives in this film, tied together through the events of the evacuation of Dunkirk in May and June of 1940. The stories are titled, “The Mole: 1 Week,” “The Sea: 1 Day” and “The Air: 1 Hour.”

The Mole:
The first narrative follows Tommy (Fionn Whitehead), a British infantry soldier, as he struggles to escape the beach. The British Navy, led by Commander Bolton (Kenneth Branagh), is trying to evacuate their army from the beach by docking at the mole, a pier jutting off the beach. While attempting to board a boat to England, Tommy finds two more soldiers in British uniforms, Gibson (Aneurin Barnard) and Alex (Harry Styles).

The Sea:
The second story is of Mr. Dawson (Mark Rylance), who is answering a call for civilian boats to aid in the evacuation. He and his son, Peter (Tom Glynn-Carney), motor across the English Channel in Dawson’s pleasure cruiser. A friend of Peter, George (Barry Keoghan) jumps on the rescue boat against Mr. Dawson’s wishes.

The brutal starkness of “Dunkirk” is realized from the very first minutes and held up for the entirety of the movie. There is minimal dialogue, and the score, by Hans Zimmer, is spare. Although the true battle of Dunkirk involved 400,000 allied personnel and hundreds of ships, Nolan’s representation of the event is not crowded. There are less than 30 civilian boats featured and no more than 10 naval ships. This adds to the mood of desolation and despair. It is as if there isn’t another friendly person within a thousand miles.

Nolan doesn’t rely on gratuitous blood and gore to stun the audience. “Dunkirk” is certainly violent, but there are no flying body parts or missing faces as there were in “Saving Private Ryan.”

“Dunkirk” is a brutal yet minimalist representation of the events unfolding around the evacuation of France. Nolan respected the gravity of the situation by avoiding gory war movie cliches. Hans Zimmer’s score perfectly complemented the cast’s quiet intensity. “Dunkirk” is a war movie for those who don’t enjoy  war movies. It is a total revitalization of the genre.