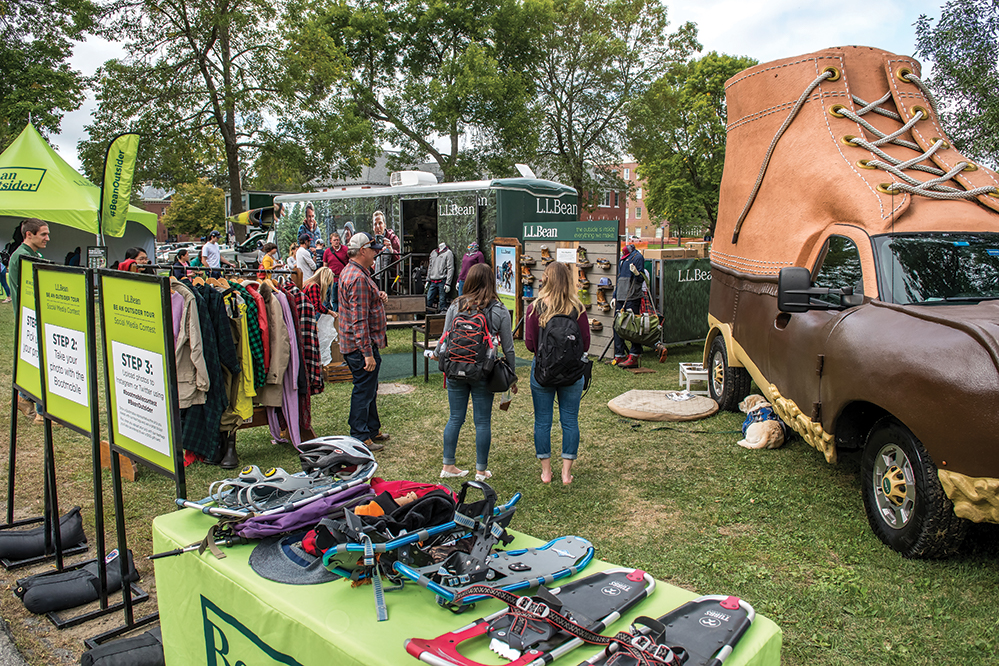 L.L. Bean visited the University of Maine as part of their Bean Outsider marketing campaign this past week. The bean boot sat parked on the end of the mall near Fogler library along with a custom boot lacing station, a trailer modified into a mobile shoe store, a boot throwing game and more.

The event is part of L.L. Bean’s annual college tour, during which they travel to schools within close proximity to their stores.

“Maine is a great venue to go to school in because there’s so much going on outside,” L.L. Bean experiential marketing specialist, Ben Sandy, said. He explained that the goal of their new Bean Outsider is “trying to encourage people to go outside and be an outsider.”

Students had the opportunity to play cornhole, shop for shoes or play “boot toss” for prizes. The marketing employees running the campaign also sold custom-colored shoelaces of the customer’s choosing.

Many students also participated in the #beanoutsider photo contest by dressing up in L.L. Bean apparel, posing in front of the L.L. Bean bootmobile and posting the images to Instagram using the hashtags #beanoutsider and #LLBeancontest. The six winners of the contest will each receive a $100 L.L. Bean gift card.

The event also offered students the opportunity to enter in a raffle for a $300 L.L. Bean gift card.

L.L. Bean was founded by Leon Leonwood Bean of Greenwood, Maine with the invention of his “Maine Hunting Shoe.” Bean was born in 1872. He grew up in Greenwood and South Paris, Maine before setting up his business in Freeport. By the age of 13, he was already a successful hunter and outdoorsman.

By sending advertisements to lists of registered hunters, Bean began a mail order program through which he sold his boots.

The first version of the boot was sold in 1911, but many customers returned them after the boot’s rubber fell off or cracked. After refunding the customer’s’ money, and making some modifications to the boot to reduce wear on the rubber sole, Bean began sales again.

The Maine hunting boot would eventually become the iconic Bean boots of today. Bean set up shop in the basement of his brother’s dry goods store and by 1917, had enough money to open the first official L.L. Bean store in Freeport, Maine.

Eleanor Roosevelt once visited the Freeport store and Bean gave her a trout knife as a gift for the president.

The store continued on successfully through the Great Depression, and in 1951 the Freeport, Maine store opened 24 hours a day. Bean took the locks off the doors, claiming there was no longer any need for them.

Opening the store 24 hours a day was apparently inspired by the hunters who would stop by in the late hours of the night and ring the doorbell until a clerk answered the door.

In 1960, the L.L. Bean fishing outlet produced its first of many pieces of tackle: a hand-tied fly fishing lure.

Leon Leonwood passed away in 1967 at the age of 94. He passed the position of president on to his grandson Leon Gordon. The Freeport, Maine store closed for the first time since opening 24 hours a day on the day of Bean’s funeral: Feb. 5, 1967.

In 1979, L.L. Bean began offering their Outdoor Discovery Schools which teaches participants everything from kayaking to fly fishing to archery. The schools have now instructed over 150,000 people in outdoor activities.

In 2012, the company celebrated its 100th anniversary with the creation of the bootmobile, the iconic boot-shaped vehicle which can often be seen driving up and down highway 295.

Today, L.L. Bean continues its dedication to the outdoors by encouraging people to get outside through its Outdoor Discovery Schools, its contests and initiatives such as the Bean Outsider campaign, and their 100 percent money back guarantees.

“We’re here to bring our product and our way of life to kids,” Sandy said.