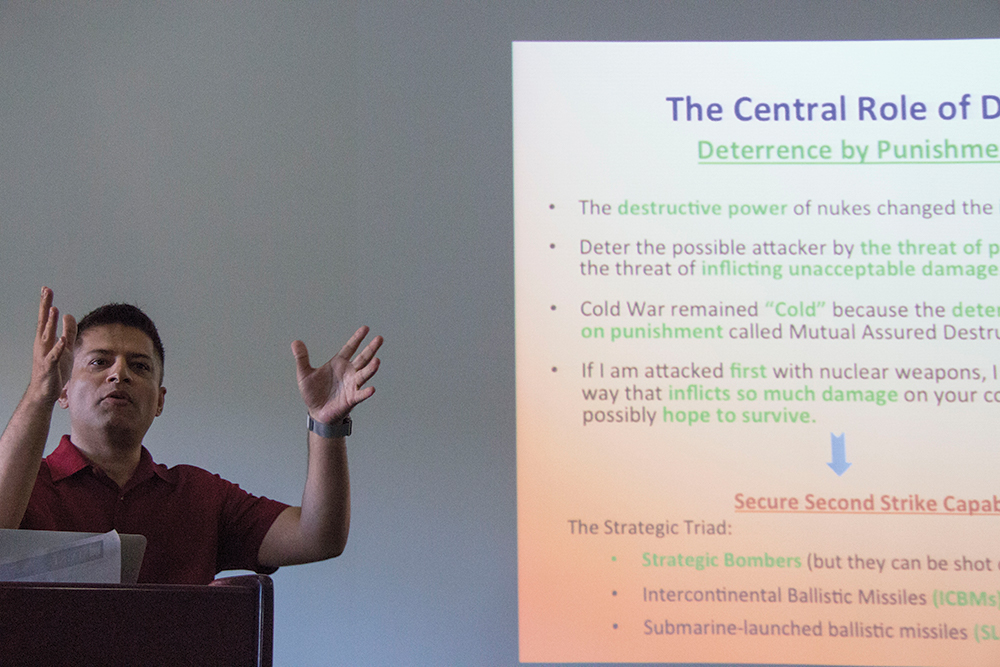 The School of Policy and International Affairs (SPIA)  held “Making Sense of the North Korea Crisis,” a free panel discussion open to the public on Sept. 11 at 5 p.m. in the Bangor Room of the Memorial Union.

The panel was opened by University of Maine Maine Political Science and SPIA professor Kristin Vekasi, detailing the history of the Korean War, a frozen conflict that is technically ongoing to the present day, long after the armistice was signed and the Korean Demilitarized Zone (DMZ) was created in July 1953.

Vekasi then described the tense political landscape of the North Asian Pacific. “The U.S. bases in the Pacific region: Japan, Guam, Okinawa, Alaska, Hawaii, Singapore, Diego Garcia, the Marine Corps in Australia, most importantly, the bases in South Korea, close to the DMZ. These are existential security threats to the country. Will they be invaded? Will they be able to repel an attack? Could they survive?”

“We know [Kim Jong-un] has had family members killed for the sake of ‘regime survival.’ If Kim believes survival of the regime is in question, that is when we’ll see him at his most dangerous and volatile,” Vekasi said.

The floor was then given to UMaine Political Science professor Asif Nawaz to discuss the evolving definition of deterrence and the politics of nuclear weapons.

“Historically, it used to be ‘deterrence by denial,’ which was achieved by denying the objectives of a possible attacker. Deny the prospect of an easy victory at a reasonable cost…But the central role of deterrence in the Nuclear Age is ‘deterrence by punishment,’ to deter by threat of punishment, i.e. by the threat of…mutual assured destruction,” Nawaz said.

The rationale of nuclear weapons in international politics is self-defense, and for North Korea specifically, the fear of disappearing into the “dustbin of history.”

It is this fear that drove the ruling party of North Korea to withdraw from the Non-Proliferation Treaty in 2003, and become a de facto nuclear weapon state in 2006.

“Conventional resources and military forces are diminishing, so North Korea’s escalation ladder in a crisis is reliant on artillery and nuclear weapons, which is inherently unstable by definition,” Nawaz said.

Finally, SPIA graduate student Jiwon Nam took the floor to lay out the political tensions on the Korean Peninsula. South Korea has a history of policies of pressure, dialogues and sanctions against North Korea. With each new President of South Korea comes a new approach to foreign policy.

President Kim Dae-jung’s Sunshine Policy, based upon seeking cooperation with North Korea with no tolerance of armed provocation, was applied during his term and those of his successors from 1998 to 2008, before being scrapped by conservative presidents Lee Myung-bak and Park Geun-hye. Current President Moon Jae-in’s policies are similar in nature to the Sunshine Policy, but the inconsistency between terms leads to more tension.

North Korean nuclear tests are a significant threat to South Korea, and North Korea prefers to speak to the United States directly.

“South Korea has to balance their power with the U.S. and China, and wants to have good relations with both,” Nawaz said.

American military bases support South Korea, and China, North Korea’s most important trade partner, may be able to help the relationship between the two countries.

Before the experts took questions, they laid out America’s most commonly discussed options for handling this North Korea crisis.

“Everyone wants negotiation on the table, figure out what North Korea wants,” Vekasi notes.

As for a preventive first strike, “Has North Korea developed second strike capabilities?” Nawaz asked. “We don’t know. We will not have South Korea and Japan as we know it if we try it.”

On decapitation, or removing the regime leaders in a rapid, but limited strike, Vekasi says, “There are people in Washington who think this is a good idea. But if he sees that coming, he will hit the button. That is regime survival.”

The United States has been using sanctions, which North Korea is not following by developing weapons anyway, and further sanctions are being discussed right now.

“If nuclear thresholds are crossed,” Nawaz warns. “They may exercise nuclear options. North Korea is one of the poorest nations in the world. More sanctions mean more poverty. More poverty means a chance that the regime may fall, and in the name of regime survival, they may push the button.”

“So,” Vekasi grimly noted in closing, “This is a no-good-options situation.”

Soccer struggles continue against Bryant
DACA: What it is and how it affects us