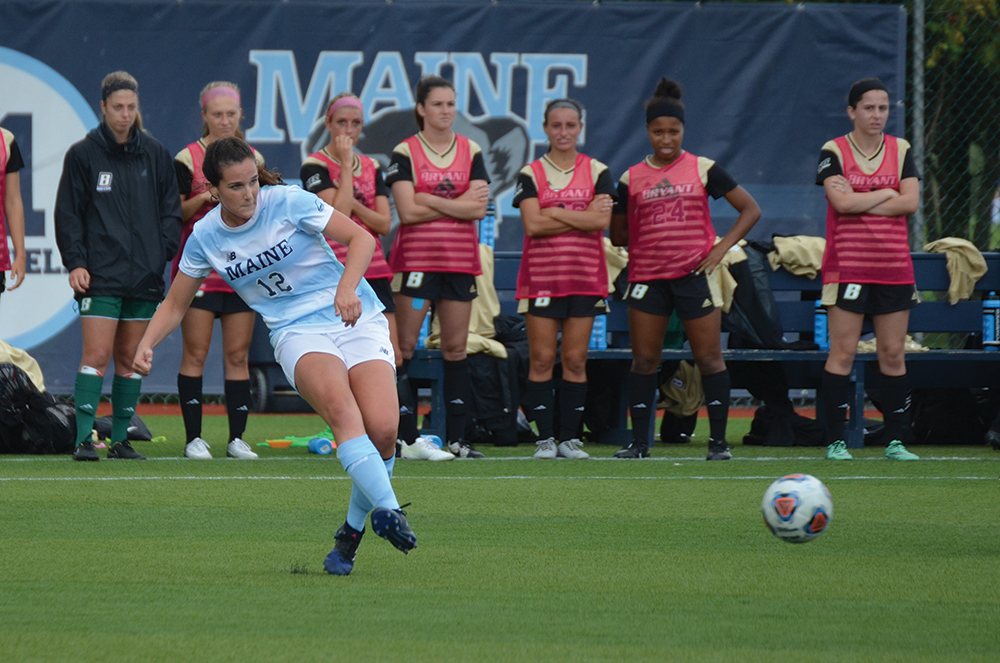 The University of Maine (2-4-1) was back in action on Thursday at Mahaney Diamond, and the struggles continued, falling to Bryant University (4-1-1) 2-1 on Thursday.

Maine got on the board early when second-year midfielder Nicole Bailey took a pass from fourth-year midfielder Kendra Ridley through the middle, finishing past Bryant’s fourth-year goalkeeper Rachel Brightman for her first goal of the season, giving the Black Bears a 1-0 lead in the sixth minute.

The Bulldogs would answer back in the 29th minute. Third-year forward Alison Guilmette would find second-year forward Remi Manna on a cross from the left toward the near post. Manna would head one in past Maine’s second-year goalkeeper Annalena Kriebisch to tie the score at one.

Bryant would put the nail in the coffin in the 77th minute. Kriebisch floundered on a 2 on 1, leaving the net wide open for second-year midfielder Marissa Grasso to put it away for the 2-1 win.

The Black Bears mustered some opportunities, outshooting the Bulldogs 10-8 on the afternoon. In the end, Bryant did more with the opportunities they had.

Bryant will square off with Binghamton University on Friday, Sept. 15 at 3 p.m.

Black Bears come out on top against Marist

The Black Bears would strike first in the eighth minute. Second-year midfielder Kayla Brace was tripped up in the box and was awarded a penalty kick. She converted the kick, scorching one past Marist’s (3-4) fourth-year goalkeeper Ashley Houghton to give the Black Bears a 1-0 lead.

Marist would strike back on a goal that created a high level of confusion for everyone involved: the players, the coaches, even the linesman, who was supposed to give an indication that it went in, did not know what exactly what happened. First-year defenseman Nicole Sasso, one of the players involved in the scrum and the one credited with the goal, was not quite sure how to explain it, with adrenaline pumping during the game

“It was a great pass. I went up for it, but it was too high over my head. Someone behind me, I think it was [second-year midfielder] Alexa Svensson just put it back into play. It hit my chest and went in. I think someone hit it with their hand. I guess the side referee saw it go in, but the center referee did not,” Sasso said.

Maine captain, Ridley, had a take on it based on what she was told from the referee.

“He said the first touch wasn’t in, and we cleared it, but not all the way. Then they came in and knocked it back it. It was a tough call because of the scramble, but we came back from it,” Ridley said.

The end result of that scramble was Marist tying the game at 1-1.

“They had a real distinct pattern. They like to press the ball, especially as it switched. Our mindset was to bypass midfield initially to back them up. We were anticipating them to play a certain way, and they did, so our adjustments came yesterday,” Head Coach Scott Atherley said.

This was not the best game for the Red Foxes, but they had certain advantages, especially outshooting the Black Bears 14-6, including 10-3 in the first half.

“We did a lot of good things, but I thought they put pressure on us and simple mistakes killed us. Second half, we came after them, but they bunkered in well. We just didn’t get the opportunities,” Marist Head Coach Gene Smith said.

Maine will be back in action on Saturday, Sept. 16 against Cornell in Ithaca, N.Y., for a 1 p.m. start time. Marist will be taking on the University of Vermont on Tuesday, Sept. 12 at 6 p.m. in Burlington, Vt.