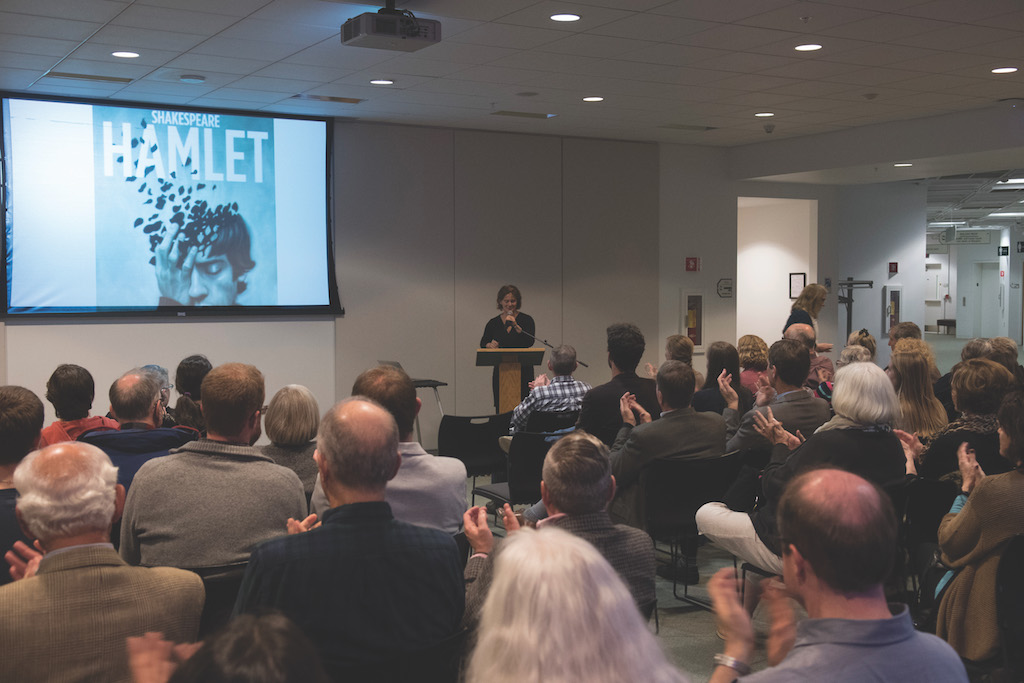 Caroline Bicks, Stephen E. King Chair in Literature gave a pre-performance discussion of Hamlet on Oct. 12 at the Collins Center for the Arts. Evan Loignon, Staff.

When most people hear the words “Shakespeare” they are teleported back to a foggy memory of their high school English classroom. When the teacher announced that the next reading would be a work of Shakespeare, some signed, others cringed and a few prayed for the roles of Romeo and Juliet. No matter the reaction, everyone knew the next few weeks would be spent stumbling over iambic pentameter and Old English while reading out loud.

Upon heading to college there are two paths, one which allows you to dive deeper into Shakespeare’s works, and one which permits you to never have to face him again. However many people, no matter which choice they make, end up revisiting his literary genius through some medium outside of the classroom.

To kick-off their Homecoming weekend events, the Collins Center for the Arts hosted Aquila Theatre Company’s rendition of Hamlet as well as a pre-performance lecture on Thursday, Oct. 12. Through these events, the University of Maine invited the audience to revisit the literary classic and allowed them to gain a new and in-depth perspective unattainable in the classroom.

The Aquila Theatre Company spreads their love of and dedication to classical theater across the nation through bringing their production to over 50 American cities per year. This was not their first time on the CCA stage, in 2016 they brought us Agatha Christie’s “Murder on the Nile” and “The Adventures of Sherlock Holmes”.

In addition to their seasonal tour, the New York based company works to produce innovative public programming. Their “You|Stories” program worked to bring stories of the veteran community and the public to the stage through a story capturing app, public events, performances, talks and readings.

According to the Aquila Theatre Company’s mission statement, “We believe passionately that everyone should be given the opportunity to engage with classical drama of the highest quality at an affordable price right in their own community, experience arts from other places and exchange ideas. We re-examine what constitutes a classical work and, in so doing, seek to expand the canon. We endeavor to create bold reinterpretations of classical plays for contemporary audiences that free the spirit of the original work and recreate the excitement of the live performance.”

In other words, they hope to make the post classroom experience of renowned works a little more interesting.

The company of eight actors used two mobile platforms, two chairs, a few props and the remarkable effects of digital projection to reimagine the tragic tale of the Prince of Denmark. Most performances, which open as written, begin during Francisco the guard’s night watch of the castle in Elsinore. Aquila, however, opened with an interpretive dance lit by the full moon which narrated the characters relationships and history.

Hamlet, played by Lewis Brown, was portrayed as the epitome of college students: lost in life and love. Clad in buckle-covered boots which reached his knees, he trampled across the stage with the fire of a scorned son. After his father’s death and his mother’s remarriage, Hamlet seeks revenge under the guise of a mad man. Brown depicted the two sides of Hamlet as clearly as night and day. For his love Ophelia, played by Lauren Drennan, being driven to madness was not an act.

Drennan approached Ophelia in the way many have before her. A dutiful daughter of Polonius and innocent sweetheart of Hamlet, driven to insanity and suicide by the death of her father. While Drennan’s portrayal was memorable, it didn’t seem to define the character as more than her relation to those around her.

Before Aquila lit up the stage, the university’s Stephen E. King Chair in Literature, Caroline Bicks, gave a pre-performance lecture. Instead of focusing on the protagonist, Bicks discussed the different portrayals of Ophelia and how our modern day notions of her reflect our perception of adolescent girls today.

Bicks pointed out that in most of Shakespeare’s female roles we see not only a lover or a daughter, but women asking bigger questions about the world around them.  When compared to these characters, the Ophelia we know seems out of place. However when examining the texts, there seems to be many moments when Shakespeare wanted more than her modern portrayal.

No element of the performance or lecture resembled those of a dusty high school classroom. From the red velvet seats, the iambic pentameter and Old English did not seem stumbled, but instead projected with passion. When the lights faded to black, the audience could have passed any test.