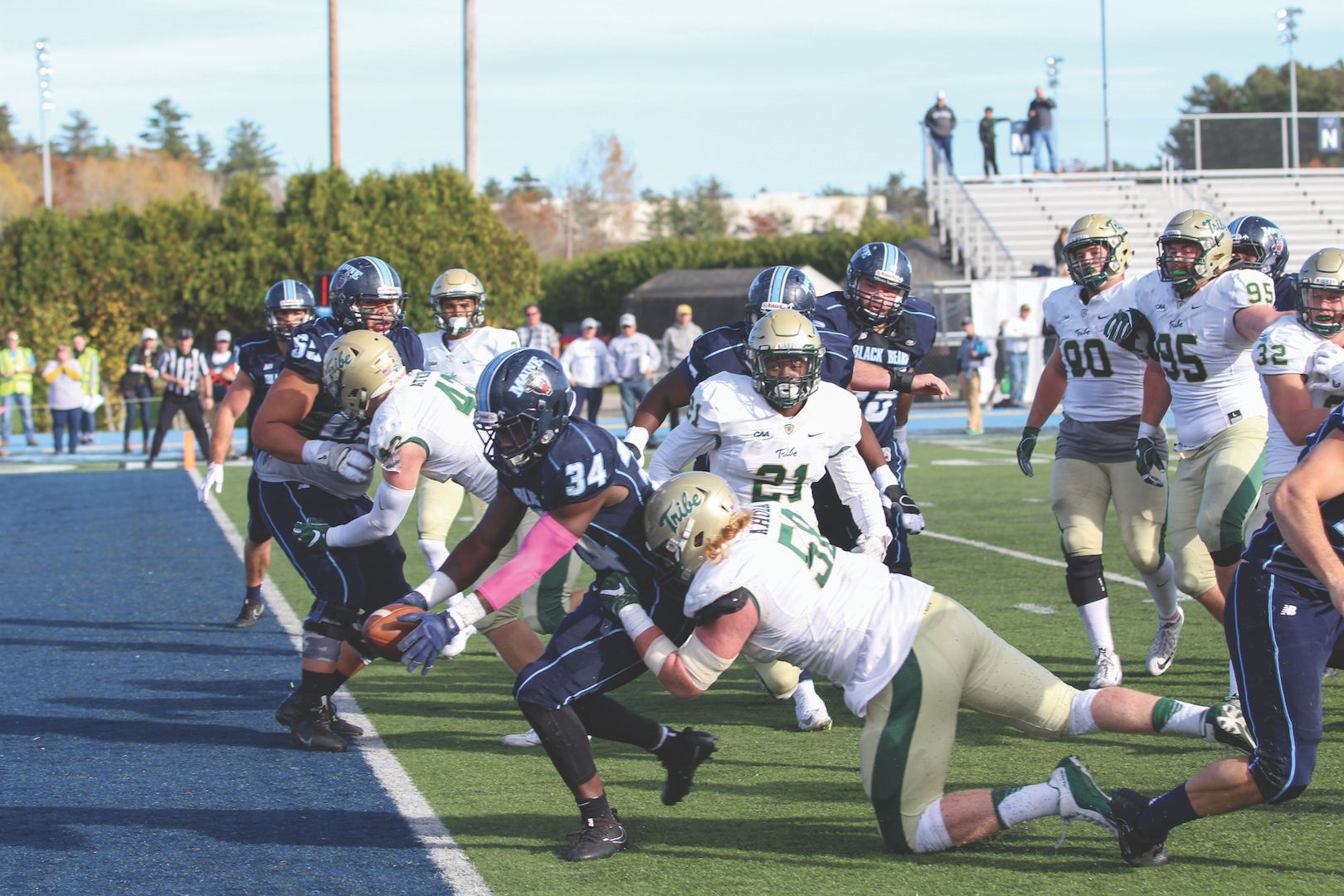 The University of Maine football team (4-3, 3-3) was back in action on Saturday, looking to run their Colonial Athletic Association winning streak to three games against the College of William and Mary (2-6, 0-5). The defense sparked the Black Bears 23-6 win over the Tribe.

William and Mary would squander the great field position that was made even better after an unnecessary roughness penalty on the Black Bears. On third and goal from the six, William and Mary first-year quarterback Shon Mitchell was picked off by third-year defensive back Darrius Hart, putting the Black Bears deep in their own territory.

After a three-and-out and a short punt that let the Tribe start in Maine territory, the Black Hole defense lived up to its name. They would allow just five more yards before second-year kicker Kris Hooper drilled a 41-yard field goal to put William and Mary up 3-0 with 9:36 to go in the quarter.

The Black Bear offense took over, chipping away with a mixture of big plays and costly William and Mary penalties. The drive would stall at the two yard line, where third-year kicker Brandon Briggs chipped in a field goal from 19 yards to knot the score at 3-3 with 5:13 to go.

A defensive struggle would ensue, as both teams traded off three and four play series like old baseball cards.

The Black Bears would finally get a push, when Ferguson connected with second-year wide receiver Jaquan Blair for 32 yards. After an ineligible man downfield penalty, the Tribe clamped down. Briggs was good again, this time from 43 yards out to give the Black Bears their first lead of the game, 6-3, with 8:47 to go in the first half.

With 1:26 to go in the half, Maine’s two minute offense found paydirt. First play of the drive, Ferguson found fourth-year receiver Jared Osumah for 34 yards, putting the Black Bears well into William and Mary territory. Ferguson would find Edwards for 20 yards on third and nine to give Maine a fresh set of downs, and set Briggs up for an easier field goal. They would not need this, as Ferguson found redshirt third-year tight end Drew Belcher on back to back passes on second and third down for the touchdown. Briggs’ extra point ran the score to 13-3 with 26 seconds left in the half.

William and Mary received the kickoff to start the second half. With third-year Tommy McKee now in as quarterback, the Tribe offense strung plays together, pushing the ball down to the Maine 17 yard line. Hooper’s kick would miss wide right, giving the Black Bears the ball back and keeping the 10 point lead intact.

Maine’s offense was not quite as quick out of the gate, going three-and-out while losing eight yards on that possession. The ensuing punt would give William and Mary the ball in Black Bear territory.

William and Mary strung a 10-play drive together to take four minutes off the clock, with a little help from Maine penalties. Hooper went back out to redeem himself from 25 yards out, nailing the kick to run the score to 13-6.

The Tribe were carrying momentum until third and 10 from the Maine 25, when Ferguson connected with Edwards for 45 yards to put the Black Bears in William and Mary territory. Gutsy play calling deep in Tribe territory prolonged the drive, as fourth-year fullback Joe Fitzpatrick barreled ahead for one yard on a fourth-and-one from the three-yard line. Then it was second-year halfback Josh Mack’s turn to be the battering ram, plunging in from two yards out for the touchdown. The extra point made the lead 20-6 with 13:43 to go in the game.

After the defense forced another three-and-out, the offense got right back to work. Another senseless penalty by the Tribe extended the Black Bears’ possession. They took advantage by feeding their two headed monster running game of Mack and Fitzpatrick, pumping their way down to the 6-yard line before Briggs nailed his third field goal of the day from 23 yards out for the final score of the day.

The Black Bear defense was hungry for the game, giving up 13 first downs and a total of 199 yards to go with the six points.