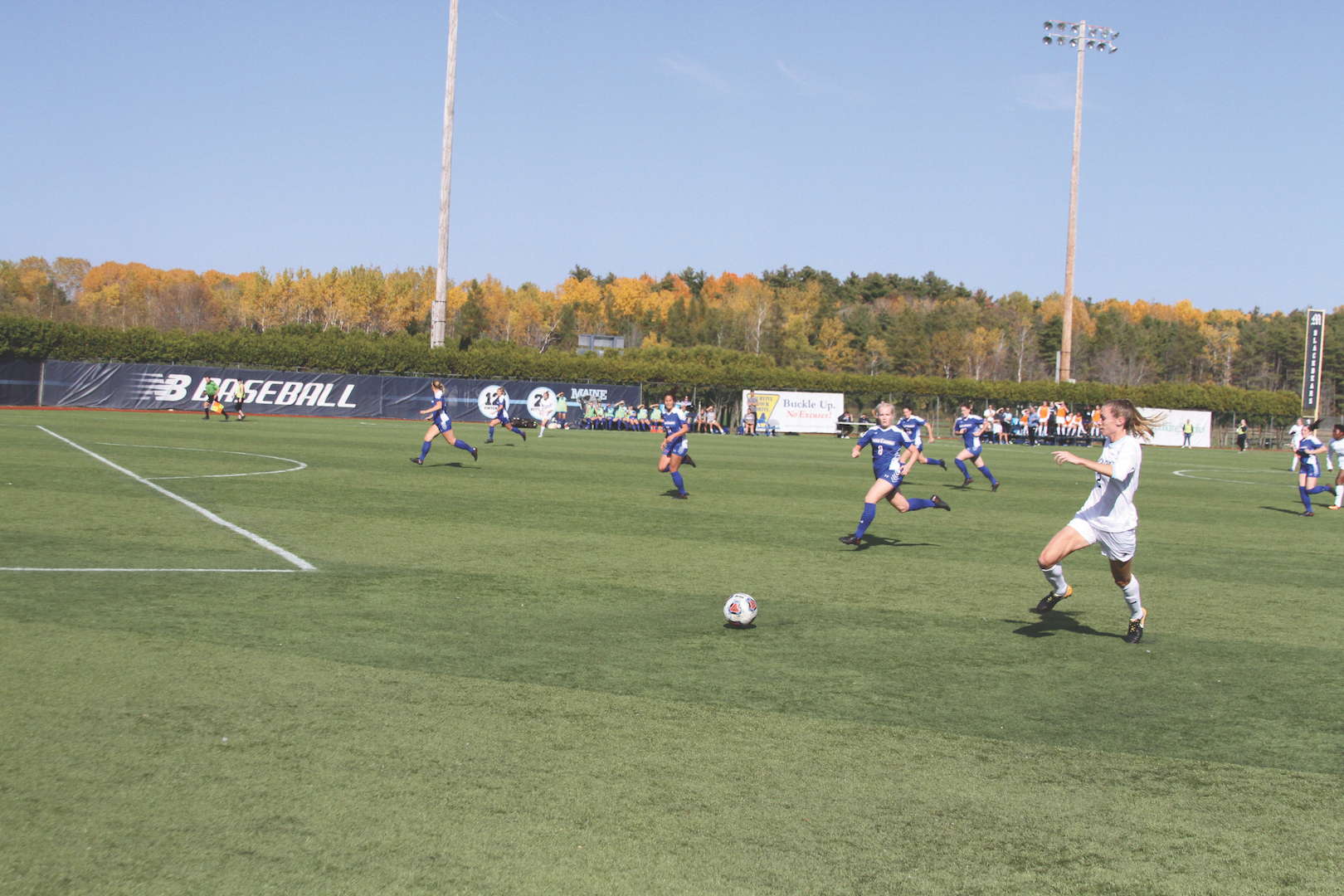 It was a chilly Thursday night under the lights as the University of Maine Black Bears (5-10-1) hashed it out against the Binghamton Bearcats(10-3-4). The game headed into double overtime with the score tied 0-0. The Black Bears fought hard in the first overtime, before falling 1-0 to the Bearcats in the second.

“Our players did everything we asked them to do. We left it all out on the field. It was just an unfortunate fluke goal, and that’s the game,” University of Maine Head Coach Scott Atherley said

Maine needed to win both weekend games to secure a spot in the playoffs, but still has a chance if the University of Vermont loses on Sunday.

It was clear early on in the first half this game would be hard fought, and that it was. The Bearcats came out aggressive, beating the Black Bears on first touches. In just the first minute of play, Binghamton first-year midfielder Dora Hayes had a shot on goal, which was saved by Maine’s third year keeper Samantha Cobotic. Finally, around the 15 minute marker, Maine settled in. During the first half alone the Black Bears put up seven shots, all of which were stopped by Bearcat first-year keeper Mackenzie Hanna.

The Black Bears turned up the intensity in the second half, matching the play of the Bearcats. Binghamton Head Coach Neil Bhattacharjee expected a well fought game.

“They’re very difficult to break down and quite honestly that is what we expected, that it was going to be a tough game for us to be able to get goals,” Bhattacharjee said.

The Bearcats bested the Black Bears in shots in the second half with a tally of 9-8. In the 80th minute of the second half, Maine’s third-year defender Mikayla Morin was given a yellow card, but no plays were made off of it.

It was only in the last minute of the game that the tide truly changed. With a score of 0-0 at the end of regular time, the game went into overtime. Both teams came out fierce, but neither were able to convert for any points leading into the second overtime.

In the second, Maine’s first-year defender Oliva Bamford had the first shot on goal, but was blocked by Hanna. Only two minutes later, second-year forward Ryan Reilly of the Binghamton Bearcats shot into the corner with Cobotic just missing the save.

“We knew it was going to be a game that wasn’t going to come easy. We expected a one goal game where we’d have to grind it out and that’s exactly what happened tonight,” Bhattacharjee said.

Binghamton wraps up their season with a matchup against the University of Hartford. Kickoff is set for 1 p.m.on Sunday

The Black Bears had a hard-fought win over UMass Lowell (UML) River Hawks (5-6-6). The Black Bears held the River Hawks scoreless for 77 minutes, with the game-winning shot coming from second-year midfielder Emilie Andersen. This was Andersen’s first career goal. The only goal was scored by a penalty kick.

“Being the last game, we said we wanted to leave everything out on the field and that we were going to be very aggressive in our approach. We had nothing to lose. We obviously knew we needed some help to have the playoff outcome go our way, but we had no control over that. What we had was control over our performance,” Atherley said.

Atherley feels hopeful going into next season, despite the disappointment from this season.

“To have this be our last one (game), is great momentum going into next year,” he said.

The game began as tense as it ended, with UML’s redshirt third-year midfielder Rachel Morrier shooting on goal in the first two minutes of play. Cobotic knocked it out of the path of the goal in a terrific save. A now awake Black Bears offense began dominating the half, dropping eight shots on UML third-year goalie Julia Schneider in the first half alone. Around the 13-minute marker Maine got a barrage of shots off, three in total in the span of only 15 seconds.

It was in the second half that the Black Bears began to demoralize the UML defense, putting up another eight shots. Screams could be heard from Schneider, telling the girls to “stay focused.” It appears the shouting went unnoticed as the Black Bears began to pick away at an already tired River Hawks defense. Because of their overly aggressive play the River Hawks conceded nine fouls in the second half alone, ending up with fourth-year defender Emily Duchesne earning herself a yellow card.

“Yeah, questionable penalty call. You know, I thought that he made a mistake, but whenever you’re the coach that’s on the receiving end I think you always kind of think that,” UML Head Coach Francesco D’Agostino said.

Coming to play, UML was confident in their ability to win, but was surprised by Maine’s aggressive start.

“We were pretty confident,” D’Agostino said. “Coming over here and playing on this field isn’t easy, but they had a good game plan. They tried to stop us from playing. I thought that we could have done a little bit more to get some more opportunities in the final third, but coming in we were pretty confident.”

Cobotic and Schneider each finished with five saves in what ended up being a very chippy game to say the least. UML finished with 13 fouls on the day to Maine’s 11.

Despite a decisive win over UMass Lowell, Maine still fell short of making it into the America East playoffs, which is their first time in six years to miss them. The University of Vermont secured the last spot in the playoffs with an excellent win over Stony Brook. The Black Bears finished up their season with an overall record of (5-10-1) and with a conference record of (3-5-0).