Black Bears split the weekend with the Bobcats 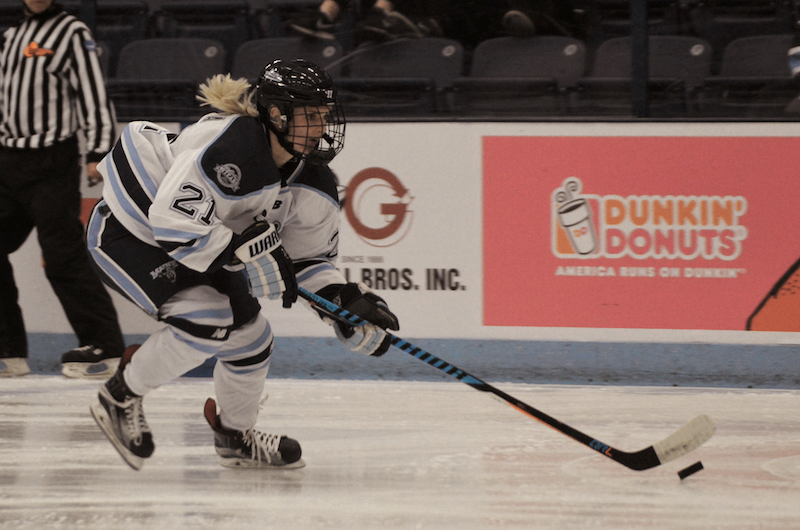 Maine's Tereza Vanisova goes on the fastbreak in this weekend's action against Quinnipiac. Photo by Ian Ligget, Maine Campus

Friday night, the No. 9 Quinnipiac Bobcats (1-1-0, 0-0-0 ECAC) squared off against the University of Maine Black Bears (1-1-0, 0-0-0 HEA) at the Alfond for their first regular season game. Although both teams came onto the ice shooting, Quinnipiac was able to find the back of the net one more time than Maine, ending the game 2-1.

“Well I got right off the bench and I saw Kate [Mackenzie] at the point, so I wanted to make sure they got the screen and she had a really good shot on net and I was just luck enough to tip it in there,” Cleary said of her goal.

Quinnipiac was not done scoring for the period. Fifteen minutes later the Bobcats found the back of the net once again off a loose puck, bringing the score up to 2-1. Assistant Captain third-year center Randi Marcon was the one to score this one off an assist from Cleary and fourth-year wing Raquel Pennoyer.

Both teams started the game off strong, with neither team scoring until the last two minutes of the first period, when Maine was able to net their first goal of the season. First-year defender Anna Zikova scored off an assist from first-year forward Michelle Weis on a loose puck. This was Zikova’s first collegiate goal.

“I just got on the top of the circle and I just shot on the net, I don’t know,” Zikova said.

This goal came moments after Quinnipiac was thought to net a goal into the lower right corner of the net. After reviewing the play the refs reaffirmed that the call on the ice of no goal was correct.

The third period saw a lot of good playing from both teams, but neither team was able to find the back of the net.

Both teams’ defenses were tested as the offenses were determined to net goals. Quinnipiac logged 22 shots on goal, while Maine was right behind with 17 shots. Second-year Allison Ives was in goal for the Bobcats. Last season, Ives recorded three starts in net, playing in a total of six games with only one goal allowed. She took the win on the night, while second-year goaltender Carly Jackson took the loss. Last year Jackson was 7-18-1 in the net, recording one shut-out.

“I was a little bit nervous before the first game, but it was good,” Zikova said.

Both teams are young teams, so Zikova definitely wasn’t the only one experiencing these first-game jitters. Maine had four first-year players on their roster for the night while Quinnipiac had six.

“We are really happy. We would liked to have had the puck a little more in the third period, but Maine came at us. They’re a good hockey team. They have a lot of grit,” Quinnipiac Head Coach Cassandra Turner said.

Both teams will return to the Alfond Saturday, Oct. 7 at 3 p.m. for the second game of the series as the Black Bears look for a win.

The Bobcats and Black Bears returned to the ice for the second game of the series on Saturday afternoon. The game started off right where it had left off the day before with both teams skating to win. This time Maine came out on top, winning the game 4-2, leaving the series split.

Similar to the night before, the second period was when all the magic happened. Both teams netted two goals, with Maine finishing the period ahead by one. Three minutes into the period. Maine brought their one-point lead up to two when second-year forward Tereza Vanisova and second-year defender Brittany Kucera set up the shot for second-year forward Vendula Pribylova to find the back of the set.

“I don’t think too much changed. Our game plan was pretty much exactly the same, we changed a few things, didn’t change much. I just think with the puck we were better,” Reichenbach said.

After Maine scored their second goal, Quinnipiac opted for a goalie switch. Starting goaltender first-year Allison Small was replaced with Ives for the rest of the game.

Two minutes after Maine’s goal, Quinnipiac countered with one of their own. Coutu-Godbout scored with the assist from fourth-year Assistant Captain center T.T. Cianfarano and third-year Captain wing Melissa Samoskevich. Samoskevich and Cianfarano skated down the ice two-on-one with a Maine defender and were able get it to Coutu-Godbout to score.

Six minutes later, Quinnipiac knotted the game at 2-2 with another goal. There were 10 seconds left on the power play opportunity after Maine’s Kucera was sent to the box for holding. Quinnipiac took full advantage of this as Mackenzie found the back of the net with an assist from Cianfarano and Samoskevich.

Maine did not let the score stay knotted for long. Two minutes after Quinnipiac’s goal, Maine scored again on the four-on-four, after Vanisova and fourth-year wing Raquel Pennoyer were sent to the penalty box for hitting after the whistle. Second-year forward Lydia Murray scored for the Black Bears off an assist from third-year defender Alyson Matteau and second-year defender Ebba Strandberg, putting Maine in the lead 3-2.

The game started in a similar fashion to the night before, but with much more force and determination that the previous game. In the first period alone, Quinnipiac had 16 shots on goal, while Maine only had five. Unlike Quinnipiac, for Maine, one of these shots resulted in a goal. Seconds after Maine killed the penalty, Vanisova got possession of the puck and passed to Weis, who passed it to Kucera to score. This point put Maine in the lead going into the second period.

“Me and Tereza [Vanisova] were playing in the corner. We got the puck up to Brittany [Kucera] and she took a shot and then Quinnipiac’s player actually did the job and put it in their own goal. So that was kinda nice,” Weis said.

Winning by one was not enough for the Black Bears as they continued to make shots on goal for the rest of the game, giving Ives a run for her money. In the last period both teams were trying to score and best the other team, but it was Maine who was finally able to do it. With less than two minutes remaining in the game, Ives was pulled for an extra offensive player. Vanisova got the puck and scored an unassisted goal on the empty net for her first goal of the season and Maine’s fourth of the game.

Although Quinnipiac continued to try, they were not able to find the back of the net again, falling 4-2 to the Black Bears.

Quinnipiac will continue on the road traveling to Providence on Friday, Oct. 6. Puck drop is scheduled for 7 p.m. Maine will also hit the road to Troy, N.Y. to face Rensselaer Polytechnic Institute on Friday. Their game is scheduled to start at 6 p.m.