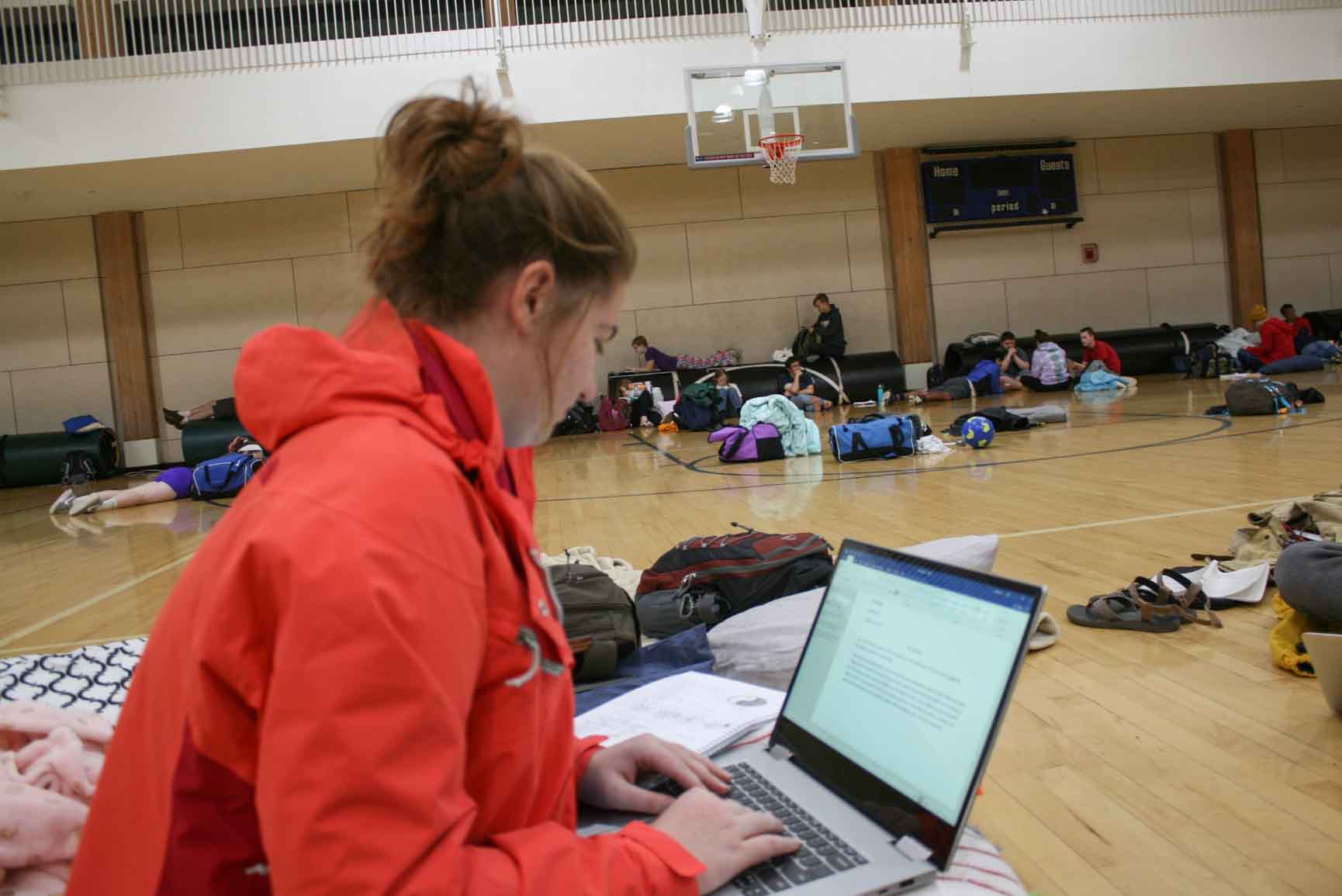 On Oct. 30, a few minutes after 8 a.m., bad weather and wind storms knocked out power in many buildings all over the state, as well as on the University of Maine campus.  At 8:14 a.m., UMaine’s emergency system sent out a campus-wide text letting students and residents on campus know that power had gone out. Soon after, multiple text alerts notified students of canceled classes for the day, and sent out reminders to be cautious when going outside and to watch out for fallen trees and debris from the storm.

The alerts also notified students that many of the buildings around campus had to be evacuated. Over 255 residents packed bags and headed out of their dorms to the New Balance Recreation Center, based on a tally kept by rec center employees. Other students were sent to the Memorial Union.

“The situation was a stressful one because of the low levels of communication. No one had any idea what was going on besides what was sent out publicly in the texts, and even the RA’s didn’t know what was happening,” first-year student and Penobscot resident Sierra Harmon said. “The honors buildings were some of the first to be evacuated, and we had to rush to pack our things and had no clue when we would be back in our rooms.”

“The evacuation happened at a really bad time. People have been having trouble figuring out if they had to go to classes or not, and whether or not their homework for tomorrow had to be done,” first-year student and Penobscot resident Emily Roth said.

Students on the east side of campus including those in Somerset, Cumberland, Oxford, Knox, Androscoggin and Gannet halls, as well as other buildings located in the area, lost power for an hour starting at 3:30 p.m. This was a planned power loss so staff could try to repair the outages on the other side of campus and restore electricity.

“Our power came back mid-morning after being out for a little, but was soon out again due to it being shut off in order to try and restore power to the other parts of campus. The library was shut down and the only places to eat were at Hilltop Dining and Memorial Union, which made a lot of students worry and start to wonder when we would get power back,” first-year student and Cumberland resident Sapphire Hernandez said.

DTAV and Patch, also located on the east side of campus, were two of the buildings that had power and then lost it again as the campus tried to restore it to the west side. They had heard rumors that their building was the next to be evacuated if the power did not return, but it came back on around 4:45 p.m.

“We were happy that it came back on before we were evacuated and we were happy to help anyone who didn’t have power,” fourth-year student and DTAV resident Marie Ring said.

Around 5 p.m., campus sent out text alerts letting students know that the east side of campus had regained power and was stable, but no updates were given as to when the west side of campus would have power again.

“We thought the school was much more prepared for an emergency than it proved,” first-year student and Penobscot resident Megan Sinclair said. “My roommate and I were confused, and somewhat annoyed, when we found out we had to evacuate. We weren’t given much time to decide what to bring.”

Students and staff remained in the union and the rec center for much of the afternoon and evening, and many of the residents who couldn’t leave campus had pillows and blankets spread across the floor to sleep on. Dining hall staff and employees handed out water and snacks to the evacuated students. Some students tried to make the best of it, finding their own ways of creating fun. One student, fourth-year Edward Unger, started reverse trick-or-treating, walking around, dressed in a Halloween costume handing out candy to students at the rec center. Listening for updates and for more information, the Resident Assistants and the hundreds of students who had been evacuated waited for further instructions and news.

The most recent update came this morning in the form of a text alert from the university stating, “Power restored to res halls; some buildings still without power. Power fluctuations may occur. All asked to conserve energy.” This text came at 10:26 a.m. and all further updates can be found at umaine.edu.

This story is still developing.